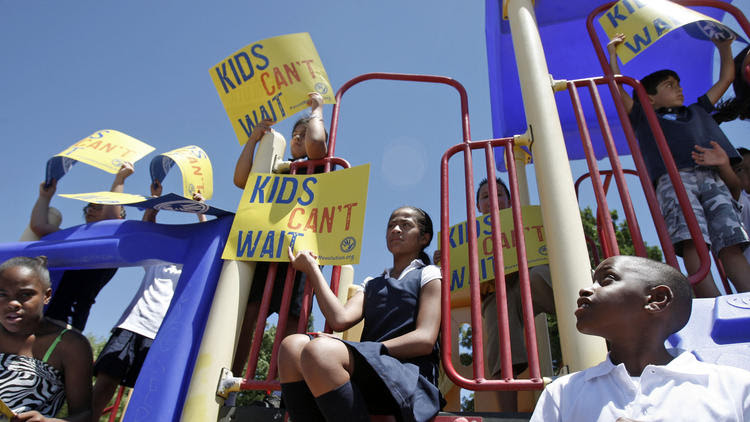 12 Nov. 2014  ::  Los Angeles Unified Supt. Ramon Cortines said Tuesday that he will allow parents to petition for sweeping changes in their failing schools, reversing the district’s previous position that it was not subject this year to the "parent trigger" law allowing such overhauls.

Cortines’ decision effectively overturns the stand taken last November by then-Supt. John Deasy, who said the law could not be used because the district had obtained a waiver from federal educational requirements that are linked to it.

In an interview, Cortines said he saw no reason not to allow parents the chance to change their schools under the trigger law if they so desire. He said he would not characterize his decision as a "reversal" of Deasy’s position.

"I think it is a part of giving parents a choice," he said. "If they want to do something I need to support it."

Cortines’ action on parent trigger is the latest move pushing the district in a different direction since he took charge Oct. 20.

A key change was his opposition to using school bond money to purchase curriculum on iPads and other computers. He said buying curriculum was an inappropriate use of the voter-approved funding.

He also pressured the district’s head of technology to resign — after two troubled technology projects: an iPads-for-all program and a new student records system.

Cortines also lifted an informal ban on communications between staff members and board members. And he intends to reorganize the district to give regional administrators more authority.

Deasy’s position on parent trigger came to light in August, when a district official wrote a letter about it to former Sen. Gloria Romero, who authored the 2010 law.

Deasy subsequently told The Times that the federal waiver granted to L.A. Unified and eight other California districts that had jointly created a reform program had restarted the clock for trigger overhauls. Schools, which need to be academically substandard for two years before they are eligible for parent-led changes, would again be subject to them at the end of this school year, Deasy said at the time.

Romero, declaring herself livid at the time, said no school district could exempt itself from state law. She also criticized L.A. Unified for keeping the decision quiet for several months after first informing Parent Revolution, a Los Angeles educational nonprofit, about it last fall.

"I’m grateful to [Cortines] and his new leadership for restoring the integrity of the law," she said. "The district cannot just proclaim themselves above the law and then keep quiet about it."

Steve Zimmer, a Board of Education member and critic of the law, said there would still be some hurdles to using the parent trigger law. Under it, parents at certain low-performing schools can petition to shut down the campus, change staff and curriculum or convert to an independent charter enterprise, which are publicly funded and usually non-union.

But Zimmer said it was unclear how schools subject to trigger campaigns could be identified because the state has currently suspended its standardized testing program as it transitions to new assessments.

The California Department of Education, which is still required to provide a marker of academic progress to the federal government despite its transition in testing, is currently using a three-year average of a school’s previous Academic Performance Index, a 1,000-point measure of campus quality.

In any case, there do not appear to be any current trigger campaigns in L.A. Unified.

But Parent Revolution is helping parents organize for change in at least five new schools, most of them in L.A. Unified, according to Gabe Rose, the group’s deputy director. Rose said the parents have not yet decided what action they want to take but hundreds are expected to gather Saturday at a "Parent Power" conference sponsored by his group.

Zimmer reiterated his criticism that the parent trigger law has proved divisive and said a more collaborative way to improve struggling schools must be found.

"The question is not whether the trigger can be pulled at a particular moment," he said. "The question is how can we work together so that families and schools can turn toward each other instead of against each other to make changes needed for kids."

Deasy, Cortines, Romero and Zimmer are not lawyers. And even if they were, they are not judges. I am neither either. But ultimately this is a case that probably can only be decided in the US Supreme Court if my memory of High School Civics is correct.