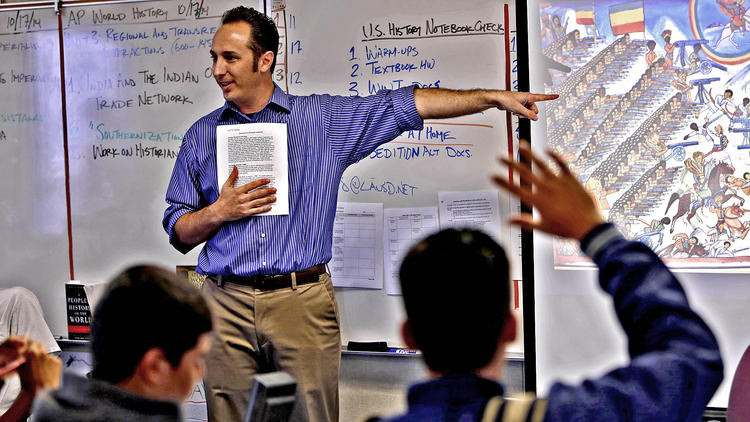 "You just read out of the textbook, and it wasn't interesting," Vanessa said.

But during a recent period of World History, Vanessa and her classmates were engaged in excited discussion about the 1896 Battle of Adwa between Ethiopia and Italy. Their teacher, Daniel Buccieri, showed them an illustration of the event and peppered them with questions.

Who do you think won? How do the American and Ethiopian accounts differ and why? How was Ethiopia able to defeat Italy in this pushback of European imperialism?

With that, the students became sleuthing historians in search of truth rather than passive recipients of a droning lecture.

That's the aim of a free, online Stanford University curriculum that is picking up steam nationally as educators grapple with widespread evidence of historical illiteracy among U.S. students.

Only about a third of Los Angeles Unified School District high schoolers were proficient on state standardized U.S. and world history tests last year; nationally, 12% were proficient in U.S. history in the 2010 National Assessment of Educational Progress exam.

L.A. Unified became the curriculum's largest booster this year when it signed an 18-month, $140,000 contract with the Stanford History Education Group for training and collaborating on more lesson plans. So far, 385 teachers and administrators — including about 40% of the social science instructors in the nation's second-largest school system — have attended Stanford-led workshops this year.

Nationally, the curriculum has been downloaded 1.7 million times by educators in all 50 states since the program was launched in 2009.

As the teaching of history comes under national scrutiny, with critics attacking the new Advanced Placement U.S. history guidelines as anti-American, the Stanford program takes no sides. With more than 100 ready-made lesson plans covering a range of U.S. and world events, the curriculum features a central historical question and provides primary documents for students to use in shaping their own answers, backed by evidence.

Was ancient Athens truly democratic? Were the "Dark Ages" really dark? Why did Chinese students support the Cultural Revolution? Did Abraham Lincoln actually believe in racial equality? What made the Vietnam War so contentious?

"This overturns the traditional textbook," said Sam Wineburg, the Stanford education professor whose research more than two decades ago laid the groundwork for the approach. "Students explore questions with original documents and cultivate a sense of literacy and how to develop sound judgment." 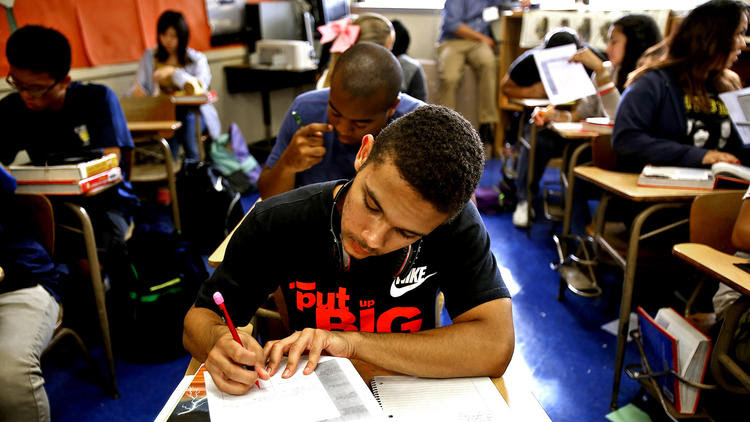 In a 2001 book, Wineburg argued that students must be trained to question history in order to understand it, just as professionals do; the curriculum is called "Reading Like a Historian." The ability to question the credibility of information and its sources, he said, is critically relevant in today's digital age — judging claims, for instance, that President Obama was born in Kenya.

The Stanford group has also developed free assessments, more than 65 so far, that gauge mastery of the targeted skills through short essay questions rather than traditional multiple-choice tests. In a test run five years ago, 236 students in five San Francisco high schools using the curriculum outperformed peers in factual knowledge and reading comprehension compared with those in traditional classes, Wineburg said.

For school systems such as L.A. Unified, the curriculum came at an opportune time — just as the district is shifting to new learning standards known as Common Core. The standards focus on cultivating such skills as reading complex texts and integrating and evaluating information from multiple sources.

Not all teachers have embraced the lessons. Some say they take too long, typically four days, although Stanford trainers say they can be adapted for one or two. Others say they are short on content. And some instructors prefer their approach of lectures and textbooks. Only about a quarter of social science teachers at Hollywood High use the curriculum, said Neil Fitzpatrick, the department chair.

But Fitzpatrick and many of the 60 colleagues who attended a training this month praised the curriculum and shared ideas on how they modified it — actions that Stanford fully supports — with bingo games, film clips, Play-Doh, poetry, poster sets, Google images.

Buccieri, of Venice High, said he added the Italian perspective of the Battle of Adwa to further enrich the lesson. He said he began incorporating elements of Wineburg's approach after reading his book more than a decade ago and found the Stanford curriculum on his own four years ago.

"History isn't a set of answers I'm passing down to kids," he said. "It's more a set of questions and problems. To me, that's more exciting."

Many students seem to agree. Michael Corley, a history teacher at Polytechnic High in Sun Valley, said nearly 90% of about 100 students he polled preferred the Stanford curriculum over their textbook.

Students don't feel they can argue with the textbook, he said. But using the Stanford lesson on Prohibition to debate why the 18th Amendment banning alcohol was adopted and evaluating perspectives about it from a medical doctor, anti-saloon activist and children's rights advocate? Now that excites them, he said.

He added that the Stanford curriculum seems to especially engage boys, perhaps by appealing to their competitive "gamer mentality," and said his students who typically earn Cs and Ds also do well because the lessons spark their interest. "You can see what they're truly capable of," he said.

Rosio Salas said she had 10 substitutes in one year who did nothing but assign textbook readings and worksheets. She didn't remember anything she learned. "You just did it because you had to do it."

Now, students say history is exciting. They understand it. They even remember it — as classmate James Gregorio proved by explaining that a Serbian terrorist's assassination of Archduke Franz Ferdinand of Austria ignited World War I.

"You're not just sitting there having to listen to him," sophomore Drew Anderson said. "You get to figure things out for yourself."

The Reading Like a Historian curriculum engages students in historical inquiry. Each lesson revolves around a central historical question and features sets of primary documents designed for groups of students with diverse reading skills and abilities.

This curriculum teaches students how to investigate historical questions by employing reading strategies such as sourcing, contextualizing, corroborating, and close reading. Instead of memorizing historical facts, students evaluate the trustworthiness of multiple perspectives on historical issues. They learn to make historical claims backed by documentary evidence.

How do I use these lessons in my classroom?

The 73 lessons in the U.S. curriculum, initial 31 lessons of the world curriculum, and 5 lessons in the introduction to historical unit can be taught in succession. But these lessons are designed to stand alone and supplement what teachers are already doing in their classrooms. Most lessons take a full class period, though some extend over several. The U.S. and world history lessons generally follow a three-part structure:

1) Establish relevant background knowledge and pose the central historical question. Each lesson approaches background knowledge differently. For some, we've designed PowerPoints, in others we use a video clip from United Streaming* to establish historical context. Many lessons ask students to read a relevant selection from their textbook and answer questions. In some we've outlined mini-lectures or included a timeline that students might reference as they read the documents. Establishing background knowledge is the first step in the inquiry process. This background frames the central historical question, and motivates students to investigate the documents that accompany the lesson.

2) Students read documents, answer guiding questions or complete a graphic organizer. Our lesson plans include documents that address the central historical question. Most lessons draw on two or more documents with conflicting perspectives. The teacher's decisions on how or whether to assign homework plays a big part in pacing the lesson. Depending on the lesson plan, students will engage in different activities as they read and interpret the documents. The Reading Like a Historian curriculum is built around four basic lesson structures:

a) Opening Up the Textbook (OUT): In these lessons, students examine two documents: the textbook and a historical document that challenges or expands the textbook's account. For a sample OUT, see the Battle of Little Bighorn Lesson Plan.

b) Cognitive Apprenticeship: These lessons are based on the idea that ways of thinking must be made visible in order for students to learn them. In lessons following this format, teachers first model a historical reading skill, then engage students in guided practice, and ultimately lead them to independent practice. For a sample cognitive apprenticeship lesson, see the Stamp Act Lesson Plan.

c) Inquiry: All lessons in the curriculum include elements of historical inquiry, where students investigate historical questions, evaluate evidence, and construct historical claims. Some, however, are designed around an explicit process of inquiry, in which students develop hypotheses by analyzing sets of documents. Such inquiries are best suited for block or multiple class periods. For a sample inquiry, see the Japanese Internment Lesson Plan.

d) Structured Academic Controversy (SAC): For these lessons, students work in pairs and then teams as they explore historical questions. After taking opposing positions on a question, they work to gain consensus or at least to clarify their differences. These lessons are well suited to block or multiple class periods. They work best after students have gained experience working with primary documents. For a sample SAC, see the Lincoln Lesson Plan.

3) Whole-class discussion about a central historical question. The final segment of the Reading Like a Historian lesson plan is the most important. Too often, however, it is dropped due to time constraints. We think it's better to eliminate one of the documents than cut such a valuable opportunity to practice historical thinking skills, articulate claims and defend them with evidence from the documents. Only in whole-class discussion can students see that history is open to multiple interpretations, and that the same piece of evidence can support conflicting claims. Students often find this activity foreign and uncomfortable at first. But through practice they gain an understanding of their role as knowledge-makers in the history classroom.

Can I start the Reading Like a Historian curriculum in the middle of the school year?

Of course! Reading Like a Historian lessons are designed to stand alone or to supplement your existing curriculum at any point. However, because the Reading Like a Historian lessons present history in a way that may be unfamiliar, it's important to introduce students to the basic concepts of the curriculum. That's why the Introduction to Historical Thinking Unit includes five short lesson plans to orient students to the curriculum and five classroom posters to remind students what questions to ask when reading historical documents.