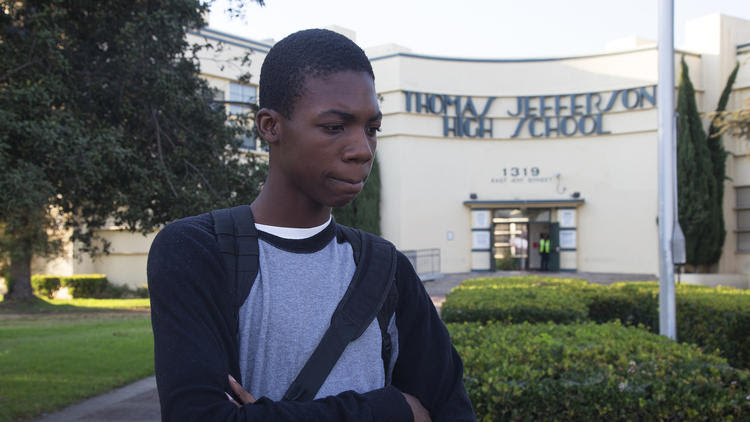 Armani Richards, a senior at Jefferson High School, is one of hundreds of students at the school who lost learning time this year because a malfunctioning computer system failed to provide accurate schedules. (Gina Ferazzi / Los Angeles Times)

Nov. 18, 2014 ::  California high schools with high-poverty students lose nearly two weeks of learning time annually because of teacher absences, testing, emergency lockdowns and other disruptions compared with their more affluent peers in other schools, according to a new UCLA study.

Although public schools generally offer the same number of school days and hours, following state law, the study detailed the significant differences in how the time is actually used. In heavily low-income schools, students lost about 30 minutes a day to factors often connected to economic pressures. Lack of transportation led to more tardiness, for instance, and more transiency made it more difficult to form stable classrooms.

Teachers at disadvantaged schools reported spending significantly more time on counseling, college and career advice, discussions about inequality and financial responsibility, access to healthcare and other issues not necessarily connected to academic subjects.

Their students were nearly three times as likely as more affluent peers to suffer stress from violence, immigration, caring for family members, lack of healthcare, hunger and unstable housing, the study found. And the schools struggled more with ineffective substitutes, access to school libraries and computers and noisy and dirty classrooms than higher-income campuses.

"Students in the highest-poverty schools are getting less even as they need more," said John Rogers, a UCLA education professor who co-wrote the study with colleague Nicole Mirra. "Quality of education differs by zip code."

The survey of 793 teachers in 193 high schools last November and December examined schools by the percentage of students eligible for federal school meal subsidies, an indicator of poverty.

Students in the highest-poverty schools are getting less even as they need more. Quality of education differs by zip code. - John Rogers, UCLA education professor

The issue of unequal learning time recently came to a head at Jefferson High School in Los Angeles, a high-poverty campus where hundreds of students walked out of classes to protest a malfunctioning scheduling system that caused them to lose days of instructional time.  The L.A. Unified Board of Education last month approved a $1.1-million plan for a longer school day, additional classes and tutoring after a court ruling ordered the district to fix the problem.

Statewide, the American Civil Liberties Union, Public Counsel and others filed a class-action lawsuit this year on behalf of students at nine California schools asserting that a loss of learning time violated their constitutional rights to an equal education. The lawsuit asks the state to develop a system to track days and minutes of actual academic instruction.

Educators have long called for more learning time; the 1983 "Nation at Risk" report, which kicked off a national school reform fervor, recommended an expansion of the school year to at least 200 days (California law requires a minimum 175-day school year). But steep budget cuts triggered by the 2008 recession forced many school districts to shorten their school year.

Meanwhile, Rogers said, economic segregation has intensified in Los Angeles County, exacerbating the problem of unequal instructional time. In 1970, 52% of L.A. neighborhoods were middle-class, but by 2000 that had dropped to 28.3%, placing the region last among 100 metropolitan areas, according to a 2006 study by the Brookings Institution.

The state's shift to a school funding system that gives more money to campuses for students who are low-income, learning English or in foster care could help close the gap, Rogers said. But he added that monitoring would be needed to make sure that schools actually used the extra dollars to extend the school day or school year.

So far, 51 of 60 California school districts have indicated plans to use the new funding to expand summer school, according to a new survey by the Partnership for Children & Youth, an Oakland-based educational nonprofit.

Other ideas, Rogers said, include creating a pool of high-quality substitutes. High-poverty schools lost four more days to teacher absences than more affluent ones, with learning essentially halted during that time because of poorly trained substitutes, the survey found.