LA Unified Superintendent Ramon Cortines today approved moving ahead with the next phase of the district’s iPad program, officially known as Phase 2B of the Common Core Technology Project.

The goal with this action is to complete the second round of buying digital devices by equipping teachers and students at an additional 27 schools with learning devices. That brings the total to 85 district schools with iPads or, in the case of the Phase 2B buy, other digital devices, such as Chromebooks.

The total reflects 47 schools receiving iPads in Phase 1 and 11 in Phase 2A, which was halted by former Superintendent John Deasy after questions arose about the procurement process.

In this latest phase announced today, each school will have the option of buying devices that the principal and teachers deem best for their students. And the district intends to sustain that approach going forward.

District officials said they expect this latest round of devices to reach students by February.

“Our students deserve the best tools available to meet the requirements to be successful in the 21st century workforce,” Cortines said in a statement. “Without the appropriate tools, they will be disadvantaged compared to their peers across the entire nation. We also need to keep the dialogue open with our schools. We want Phase 2B to provide more options than previous phases so that our students are fully utilizing the most appropriate and current devices available.”

Unlike iPads being purchased under a new request of $13.3 million from the Bond Oversight Committee for computerized testing at the end of the academic year, the Phase 2B devices will be loaded with instructional software.

The list of schools scheduled to receive new devices is here. 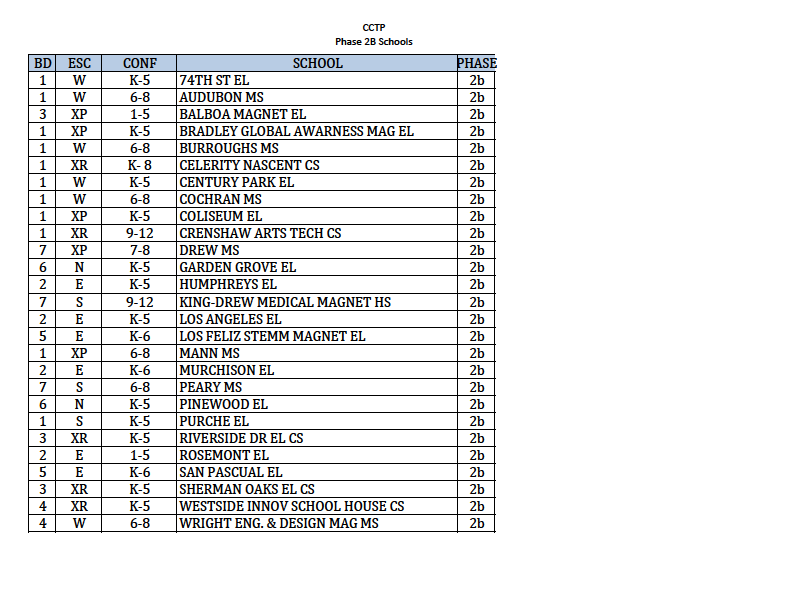 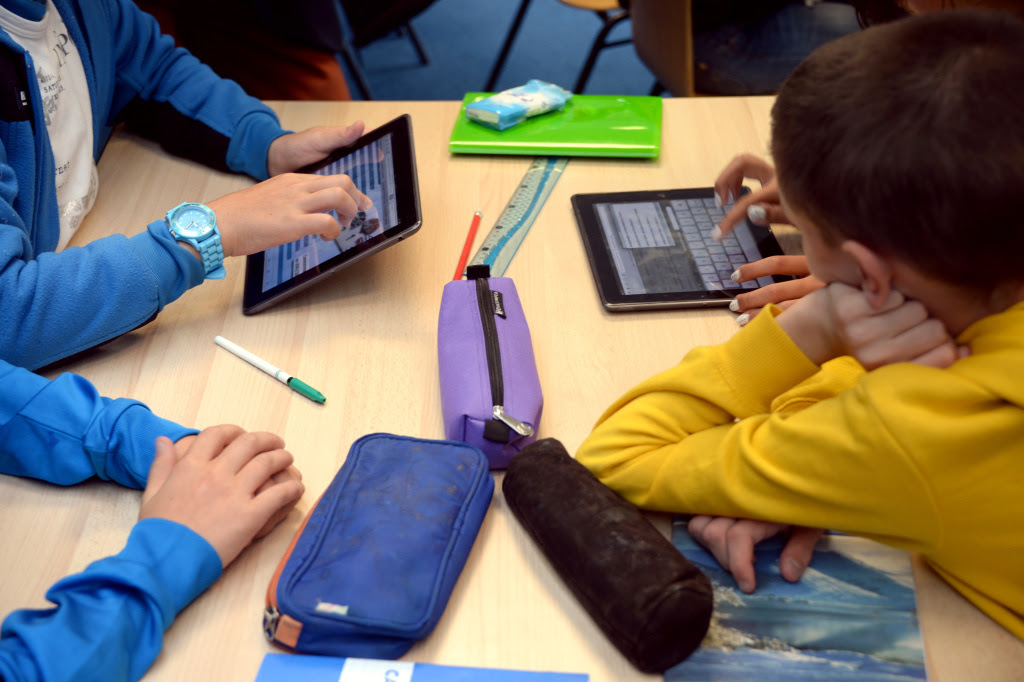 The Los Angeles school district is expanding its iPad program, adding 27 schools to those outfitted with tablets or laptops. DAMIEN MEYER/AFP/Getty Images

Without seeking new bids from tech companies for the latest purchases, the district may need to rely on a controversial contract with Apple that former Superintendent John Deasy said would be canceled.

"Our students deserve the best tools available to meet the requirements to be successful in the 21st century workforce," Cortines said in a statement on Friday.

In the latest announcement, the superintendent declared he would tap into a $114 million fund (allocated in January) to extend the school technology program to 27 more schools. That would bring the total of schools outfitted with tablets or laptops  to 106 of the district's more than 800 schools.

Deasy spearheaded the effort to supply all students with a tablet, but the program stalled after reports of missing iPads, inadequate school WiFi and a controversial contract with Apple.

KPCC found Deasy had close ties with executives at Apple and Pearson, the manufacturer of the curriculum software loaded onto many of the tablets.  KPCC reported in August that email conversations between top district staff and the vendors resembled bidding requirements, calling into question whether the bidding process was fair.

Deasy canceled the contract three days later, stating the district would reopen the bid. It hasn't.

"There was no need to cancel the contract," said Mark Hovatter, LAUSD chief facilities executive, on Wednesday. "We believe we got the best value."

Purchases under the latest two announcements allow for principals to choose their preferred device for their schools. Shannon Haber, a district spokeswoman, said the officials were still deciding whether to expand offerings beyond iPads and Chromebooks.

The Los Angeles Unified School District has returned the $733,000 MRAP military personnel carrier it received from the federal government that looks like this one now owned by the Whittier Police Department. The LAUSD's MRAP is now in Barstow. (File photo by Keith Durflinger/Whittier Daily News)

That “1033 program” came under scrutiny in the wake of scenes from Ferguson, Mo., where police confronted protesters with military weapons.

After returning three grenade launchers in September, School Police Chief Steven Zipperman said Friday he sent back the mine resistant and ambush proof (MRAP) vehicle his department received in June.

“We’ve decided that particular vehicle, based on its sheer size and maneuverability and the resources it takes to operate it, wasn’t viable for us,” Zipperman said.

At nearly 20 feet long, the more than 14-ton vehicle was designed to keep troops safe during ambushes in which enemies would blow up the lead vehicle of a convoy, while raining down gunfire on Marines and soldiers who were trapped.

School police wanted the MRAP to rescue people in the event of a wide-scale attack that would prevent other law enforcement agencies from responding to campuses, Zipperman said.

With a value of $733,000, the vehicle seemed a cost-effective alternative to armor-plated vehicles built for civilian use, which cost $300,000, Zipperman has said. However, the cost of maintenance and certifying a driver played a role in Zipperman’s decision to send the MRAP back to state officials who administer the federal program, he said.

As for a replacement, Zipperman said, the district will consider obtaining a used armored car and other cost-effective alternatives.

Manuel Criollo of the Community Rights Campaign has been advocating for LAUSD police to destroy its military arsenal, as part of efforts to demilitarize law enforcement across the city.

“We’re trying to demilitarize all police in Los Angeles, so clearly it’s an important breakthrough they’re returning the MRAP vehicle that was made for Iraq and Afghanistan and had no place on school grounds,” Criollo said.

Last month his organization sponsored a protest near Manual Arts High School in Los Angeles. Youths who turned out for the demonstration told stories of how police patrol their neighborhoods in military gear, he said.

“It’s a real thing,” Criollo said. “It’s not just that people are fearing their right to protest and the reaction of police, but we see a lot of this military equipment in use.”

The Community Rights Campaign has requested an inventory of all weapons possessed by LAUSD.

The school district previously returned three 40mm grenade launchers that were used for fighting in the jungles of Vietnam — and obtained by LAUSD in the months following Sept. 11, 2001 — as a means to fire less-than-lethal rounds that could disperse crowds in civil unrest, Zipperman has said.

However, LAUSD’s armory still contains M16 rifles received through the program. The 61 fully automatic rifles were converted to semi-auto and are used in training by officers seeking credentials to fire assault rifles, he said.

Zipperman said his department is in the process of providing public records that will detail the district’s weapon inventory. Once that happens, Criollo wants the school board to ensure all of the weapons are either destroyed, disassembled or returned to the Department of Defense, according to a Nov. 10 letter he sent to board members.

The Community Rights Campaign is also part of a coalition of groups urging the federal government to end its 1033 program.

“I have directed my staff to cooperate fully with the review as I strongly support ensuring transfers of Department of Defense materials for law enforcement activities strike a proper balance of accountability and need,” Harnitchek wrote in an Oct. 17 letter.

Since 1993, Southland law enforcement agencies have collected $150 million worth of military gear, according to a database maintained by the Governor’s Office of Emergency Services. More than $4.2 billion in equipment has been given away nationwide since the 1990s, according to an Associated Press report that found a disproportionate share went to police departments in rural areas with few officers and little crime.

“The Justice Department encourages law enforcement officials, in every jurisdiction, to work with the communities they serve to minimize needless confrontation,” Holder said.