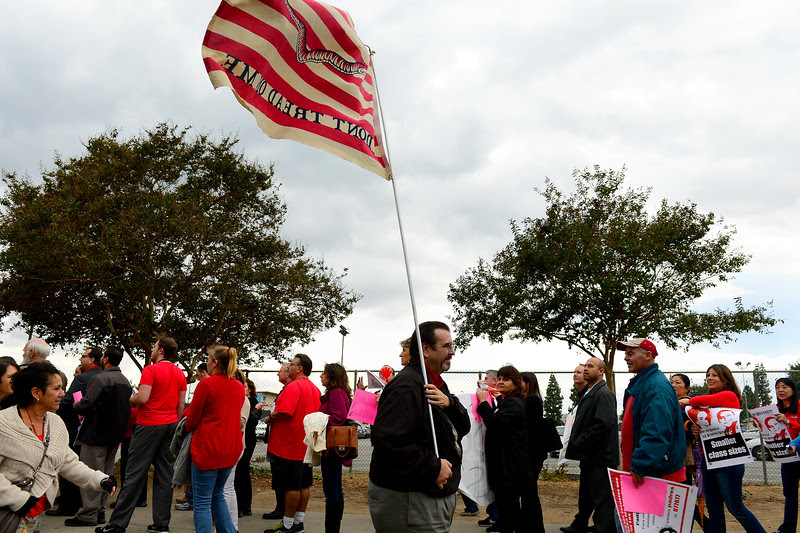 Elementary School in Granada Hills, carries a sign with teachers marching along Nordhoff Street at Monroe High School during a rally in support of pay raises and improvements to other working conditions at LAUSD schools, Thursday, November 20, 2014. (Photo by Michael Owen Baker/Los Angeles Daily News)

Posted: 11/20/14, 8:08 PM PST  ::  Kicking off a series of “escalating actions,” thousands of teachers from across Los Angeles rallied Thursday in support of union demands for a pay raise, smaller class sizes and other points of contention in contract talks with the nation’s second-largest school district.

At Monroe High School in North Hills, about a thousand teachers carried signs and sang “We Will Rock You” to music blaring from loudspeakers on a flatbed truck on Haskell Avenue, which was closed for the rally.

“The fact that we got a huge turnout in four other locations shows that educators, students and parents around the city are ready to fight for our demands,” United Teachers Los Angeles President Alex Caputo-Pearl said at the North Hills event.

The 35,000-member union and Los Angeles Unified School District remain at odds over key issues, including teacher demands for an immediate 10 percent pay raise and district efforts to implement an evaluation system that scores educators, in part, on the performance of their students.

“The teacher evaluation is unfair. It was (former Superintendent John) Deasy’s autocratic way of doing business. That’s why he’s out,” said Manuel Reyes, a fourth-grade teacher at O’Melveny Elementary School in San Fernando and who has taught in the district for 15 years. “We haven’t had a raise in seven years.”

Talk of a strike among union leaders and members continues. UTLA last walked off the job in 1989. That protest lasted nine days.

While Superintendent Ramon Cortines plans to work toward certain union requests, including smaller class sizes under an effort he has said will be evident on campuses when students return for second semester, he is standing by the pay package his predecessor offered.

Under a three-year deal, teachers would collect 6.64 percent in pay raises spread over the next 20 months and, additionally, a one-time bonus equal to 2 percent of their current pay. Before abruptly resigning, Deasy said the district would need to cut costs elsewhere to finance the raises. Meeting union demands, which previously stood at 17.6 percent, would bankrupt the district, Deasy had said.

Under UTLA’s current request, teachers would receive an immediate 10 percent raise and re-open negotiations for increases in coming years.

The two sides head back to the bargaining table Dec. 4.