The agreement will provide $60 million in raises, services and staff at 37 campuses, but doesn't address whether seniority should be the basis of layoffs. 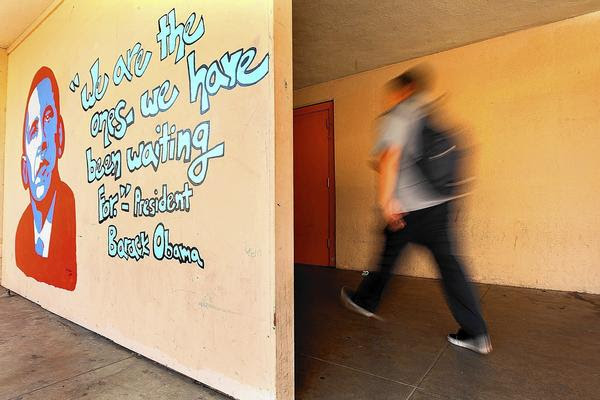 A student passes by a mural of President Obama at Markham Middle School. The lawsuit was launched after layoffs in 2009 at Markham, Gompers and Liechty middle schools. (Christina House / For The Times)

April 8, 2014, 10:28 p.m.  ::  Los Angeles school district officials announced a lawsuit settlement Tuesday that will provide $60 million in pay increases, services and staff at about three dozen schools, many hit hard by teacher layoffs. But the pact fails to deal with whether instructors should continue to be dismissed based on seniority.

The case of Reed vs. L.A. Unified, filed in 2010, was intended to protect a school from disproportionate layoffs during difficult economic times. Three campuses named in the suit had lost about half their faculty because teachers had less experience than those elsewhere in the system.

Although attorneys representing students had sued L.A. Unified, the negotiations pitted the teachers union on one side versus the district and the plaintiffs. The union was defending "last hired-first fired" rules; the other side sought to change them.

Under the three-year agreement, 37 schools will have more counselors, more administrators and more training for teachers. In addition, principals can receive a hiring bonus of $10,000, plus $7,500 after the first year and $10,000 after the second. Mentor teachers will be given extra pay and time to help less experienced colleagues.

"The youth in greatest peril at these schools will benefit tremendously from the additional administrative and teacher support," L.A. Unified Supt. John Deasy said in a statement.

The hope is that veteran teachers will be attracted to these campuses and that younger instructors will no longer choose to leave when jobs are available elsewhere. Over time, the schools would be less susceptible to seniority-based layoffs.

Also, the district could limit future dismissals of teachers who have received special training, under a provision in state law.

An earlier settlement, crafted in 2010, took a strikingly different approach. Under it, about 40 schools were protected entirely from layoffs. And dismissals across the system were distributed more evenly, even if that meant releasing veteran teachers.

But the teachers union appealed, arguing that because instructors' legal rights were affected, it had to be a party to any settlement. The court agreed and nullified that pact in 2012.

As a trial loomed, the parties negotiated. Meanwhile, the economy improved, contributing to increased funding for schools.

"We focused on surveying academic research, on why teachers leave schools," said Erin Darling, staff attorney at Public Counsel, a Los Angeles public-interest law firm that was involved in the case, along with the American Civil Liberties Union, Public Counsel and the firm Morrison & Foerster.

"These schools will now be regarded as a great place to teach," not to mention a good place for students, Darling said.

The effort to limit teacher job protections was "a total failure — and this new settlement is a final recognition of that," said Jesus Quinonez, an attorney representing United Teachers Los Angeles.

The case was launched after layoffs in 2009 at three Los Angeles middle schools — Gompers, Markham and Liechty. These campuses dismissed about half their teachers.

Gompers and Markham were run by the Partnership for Los Angeles Schools, a nonprofit under the control of then-Mayor Antonio Villaraigosa. The partnership appealed to district officials for relief, but none was forthcoming.

By then, Villaraigosa had approached public-interest firms that sued on behalf of students. And in May 2010, the court issued an injunction halting layoffs at the three campuses.

The battle over seniority and other teacher job protections is continuing in another Los Angeles County Superior Court case. In Vergara vs. California, plaintiffs seek to overturn layoff rules, the current teacher tenure process and other state laws that make it more difficult to dismiss ineffective teachers.

They contend that these laws violate the constitutional rights of students by making it more likely that they will be assigned to weak teachers.

The Reed settlement could be a "a tremendous victory" for students at affected schools, but seniority rules "will continue to harm low-income and minority students every time there is a layoff in California," said Ted Boutrous, who represents Vergara plaintiffs.

Jim Finberg, an attorney representing teacher unions, said the settlement "shows that under the existing law districts have the ability to protect teachers and stability of the school."

The Board of Education is expected to vote on the agreement at its April 22 meeting. The settlement also must be approved by the court.