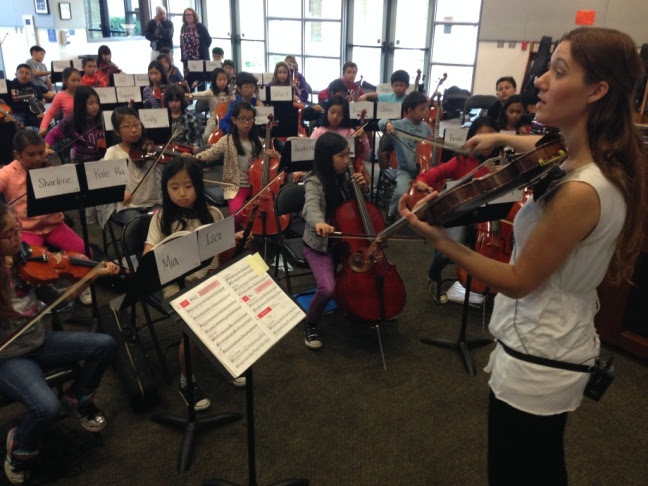 April 3rd, 2014, 5:30am  ::  The Irvine Public Schools Foundation raises money to pay for all K-3 music classes, and covers some of the costs of music classes for 4tn, 5th, and 6th graders in Irvine Unified schools.

Southern California researchers are finding that foundations, set up to raise money for public schools, are reintroducing funding inequality that was supposed to be eliminated back in the 1970's, when the California Supreme Court ruled on the Serrano vs. Priest case.

“The court said spending needs to be equitable between school districts, you can’t have Beverly Hills spending twice as much as the other guys, per pupil, because a child’s education should not be dependent on the wealth of the area in which they happen to live,” said Cal State Fullerton professor Sarah Hill.

She and two colleagues have compiled  information from about 1500 education foundations and other fundraising groups such as booster clubs and PTAs, along with Internal Revenue Service data, to create a database Hill said is the first of its kind.

“We’re doing more of a sophisticated analysis looking at how wealth matters for which school districts are able to raise money. How demographics matter,” she said.

Some Northern California public school foundations are raising additional funds of about $2,000 per student. Researchers say that figure is a significant addition to the roughly $8000 per student the state gives public schools each year. California's current level of per pupil spending is the second lowest in the country.

Seven of the 15 foundations that raised the most money in California are in Los Angeles and Orange counties. Manhattan Beach’s foundation, according to Hill’s data, raised $7.5 million in 2011 to boost instructional programs for roughly 6800 students in the district. Irvine Unified’s foundation is number three on Hill’s list, with $5.1 million raised in 2011.

Eaton said her group gives the 29,000 student Irvine Unified School District money to reduce class sizes and pay for the district’s kindergarten through 3rd grade music program. The foundation also helps to pay for music classes for all 4th, 5th, and 6th graders and pitches in for after-school and summer programs, open to kids from area districts. Irvine is a generally wealthy community, with a median household income of $92,000; but Eaton said there are pockets of the city with kids who qualify for free or reduced-price meals.

About 45 minutes north, Montebello is also turning to private fundraising efforts to help its area schools.  It has a one-year-old organization called the Friends of the Montebello Unified School District Foundation.

“They do fundraisers. I think they’ve raised about $30,000 in the past year,” said Montebello Unified Deputy Superintendent Art Revueltas.

Parents in his district, he said, want to do more and make things better for their kids, too.  But at $50,000, Montebello’s median household income falls far below that of Irvine. The school district’s Academic Performance Index, the 1000-point measure of achievement based on tests, is 200 points lower than Irvine Unified’s.

Researchers recognize there are many factors at play, but generally, the wealthier a community, the better its public schools.  Foundations based in wealthy communities are able to raise more in donations.

Hill and her fellow researchers studying the funding inequity titled their preliminary report “California Local Education Foundations: And the Rich Get Richer.”

“I wouldn’t say it’s the rich are getting richer, I think we’re providing equity for our student body and our student base,” Ralph Opasic said.

He's president of the Orange County High School of the Arts and heads its foundation. The non-profit is number four on Hill's list of total revenue raised by foundations set up to benefit one public school campus. The $19,000,000 it raised in 2011, according to Hill's analysis, added $3522 per pupil to the money it's getting from the state.

“Our demographic is across the board. It’s anything but just rich students. We have probably 15 to 20 percent of our students that qualify for federal free and reduced lunch, they’re benefitting from this education in Santa Ana,” he said.

“I can understand the concern that they have about inequities in school districts, but again I feel that if our community wants to, and is able to support it and to prevent some children from losing things that are absolutely critical to their development, we should be able to do that and frankly, to be able to do that without being judged for it,” she said.

“You don’t want to fault parents for being involved in their children’s schools. We know that’s important and nobody wants to say that parents shouldn’t be involved; but the question is still -what about the kids who are being left behind, the kids who aren’t getting the same resources - and they’re generally from lower income areas and are we OK with that.”

Some school administrators said the Local Control Funding Formula -  Governor Brown’s forthcoming funding increase for all public schools which grants additional funding for low-income and English Learner students – will do a lot to ease funding inequality.

Where does Dr. Deasy and Megan Chernin’s Los Angeles Fund for Public Education – with its Century City office and $200 million fundraising goal -  come into this?

-  from A Failure of Philanthropy: American charity shortchanges the poor, and public policy is partly to blame By Rob Reich Stanford Social Innovation Review Winter 2005