ELECTIONS 2014: In the race to replace the late Marguerite Poindexter LaMotte in District 1, he stands out as the kind of person the district needs right now.

by Times Editorial Board | http://lat.ms/1fpGrfn 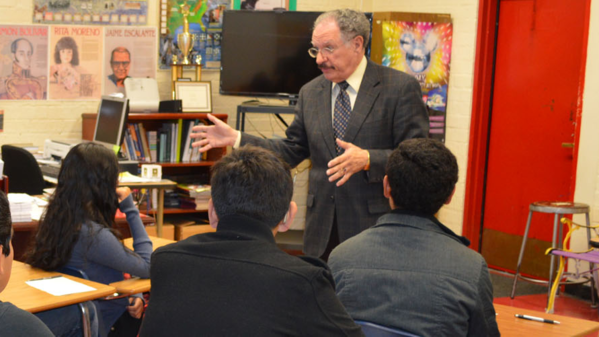 April 28, 2014  ::  The seven candidates for the District 1 seat on the Los Angeles Unified School Board include several teachers, a reality-show contestant and a former member of the board. The one who stands out, though, is former principal and district administrator George McKenna.

In 1985, years before "school reform" became a buzz phrase, McKenna was profiled in People magazine for refusing to accept the high truancy, campus crime and terrible academic performance at George Washington Preparatory High School in Westmont, where he was principal. He enlisted help to clean up the rundown, low-performing school physically, socially and academically. Students signed behavior contracts, teachers were required to submit lesson plans and assign daily homework, and truancy plummeted. A year later, his efforts became the subject of a made-for-TV movie.

Though there are several qualified candidates on the ballot to replace longtime board member Marguerite Poindexter LaMotte, who died in December, McKenna strikes us as the one who would put the needs of District 1's largely low-income and minority students above any particular ideology or political alliance. The victor in this election will serve out the last year of LaMotte's term, which ends in mid-2015.

What the board needs most is a sensible and thoughtful new member, neither reflexively pro-union nor a blow-up-the-system reformer. Most candidates lean one way or the other; what's most important is their ability to substantiate their opinions with facts, to consider the nuances of contentious issues and to exercise common sense. L.A. Unified's students would not be well served by a new board member who wants to fire Supt. John Deasy or remove him as soon as his contract is up. Though the superintendent's impatience sometimes translates as imprudence — the billion-dollar iPad purchase is proof enough of that — he has been a strong positive force for the district overall.

Another consideration for this particular election: The current board is too often combative, politicized and gridlocked. It would work more effectively with the addition of a consensus seeker. In other words, McKenna.

The race includes several qualified candidates, two of whom have raised more money than McKenna. Former board member Genethia Hudley-Hayes, who is endorsed by former Mayor Antonio Villaraigosa, has a number of good ideas for getting beyond the same old arguments over whether low academic performance is the fault of teachers or parents or poverty. But her style and angry attitude toward the school board come off as too rancorous and not what's needed now. Serious questions also have been raised about whether Hudley-Hayes padded her resume, and she has not adequately answered them. Alex Johnson, education aide to Supervisor Mark Ridley-Thomas, is a smart and engaging candidate but one who has not given adequate thought to what he can contribute to the board and how. He talks about the board being stuck — which is true enough — and says he would move it forward. But when asked how he would do this, he gave two examples of how he would have voted differently from LaMotte. In neither example had the board been stuck, and in neither case would his vote have changed the outcome.

One of McKenna's primary goals is to foster increased collaboration on the board, and with his thoughtful demeanor and the wide respect he commands as a longtime community and educational leader, he can accomplish that. His focus on reducing dropout rates is welcome, as is the priority he places on making sure that more vocational courses are made available to students. His stances on divisive topics are well reasoned; he's an independent thinker who doesn't reach for the simplistic soundbite. He knows, for example, that the existing teacher tenure laws make it too hard to fire truly bad teachers; he also thinks, and we agree, that the lawsuit to have tenure laws declared unconstitutional is an overreach. He would fight to ensure that new state money intended for low-income students actually reaches them.

Each candidate in this race has certain strengths, but McKenna's are the best fit for what Los Angeles Unified needs right now.