EX-LAWYER ON A MISSION TO KEEP SCHOOLS FAIR

Sally Smith knows California law and is challenging districts across the state that charge students for basic supplies and activities. One official calls her 'an irritant.' 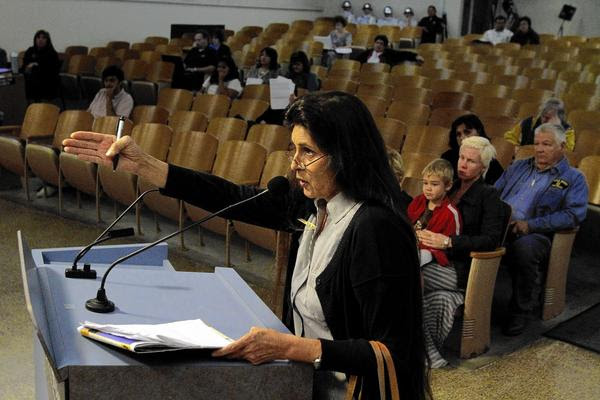 Sally Smith speaks at a San Diego Board of Education meeting in January. She focuses her attention on illegal school fees that districts pass on to students. More photos

April 23, 2014 / REPORTING FROM SAN DIEGO  ::  As Sally Smith strode to the lectern, a few people in the audience rolled their eyes. Behind their nameplates, members of the San Diego school board fiddled with a cellphone, stared at laptops and rustled papers.

They knew what she would say — she's said it dozens of times and repeats it at nearly every meeting.

"In this district," she said firmly, her eyes fixed squarely on the board members facing her, "…we have educators who exploit students to generate revenue."

"Taxpayers paid for this toothpick and noodles," she said, pointing to a brooch on her blouse that her daughter made in elementary school. "Just as we paid for that clay."

"It has to stop," she said, her words punctuated by a buzzer indicating that her speaking time was over.

With the persistence of a gadfly, the zeal of a civil rights activist and the know-how of a lawyer, Smith has made it her mission to challenge the San Diego public school system and many others across California that require students to foot the bill for basic school activities.

She bounces around the state meeting with administrators. She blasts off emails to reporters — often a hodgepodge of legal complaints, case law and bemusement at those who try to ignore her. In about a year, she's filed 200 formal complaints around the state, a huge number of appeals and countless California Public Record Act requests. 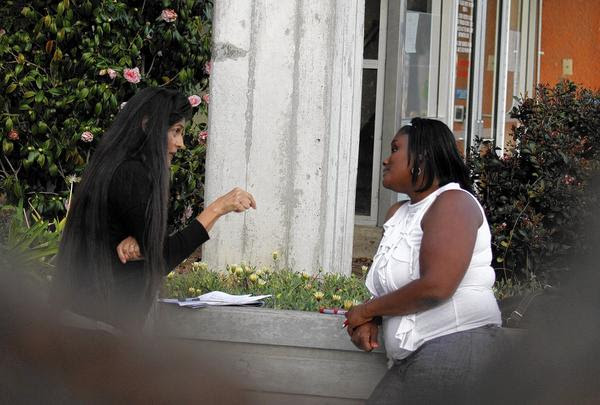 Sally Smith, left, speaks to parent Maegan Savage before the start of a San Diego school board meeting. Smith asked Savage what her troubles were, explained what services her children were eligible for and told her not to hesitate to call if she needed help. More photos

The San Diego Unified School District gets the brunt of her focus.

"There are times where I think you can say she can be considered an irritant," school board member Scott Barnett said. "Certainly, some of the legal staff — given the amount, the breadth and depth of her requests — I think are irritated at times, to say the least."

Smith's home, where her family frequently finds her typing complaints late into the night in the living room, is only a quick trip to the district offices, where most everyone knows her — or at least knows of her.

Some parents, however, are fierce critics, accusing her of ruining school activities for their children, she said. She said her car has been vandalized at district headquarters, and she quips that a brick through her window wouldn't surprise her.

"I'm not well liked," she said, her waist-length brown hair tucked behind her ears. Then again, she said, "I'm not in this battle to make friends. I'm in it to help those kids who can't pay."

A large number of school districts were quite brazenly ignoring the law.”

In 1879, California's Constitution granted "free school" for its citizens. The state Supreme Court would later find that fees charged for educational and extracurricular activities violated the state's guarantee of a free education.

"Access to public education is a right enjoyed by all — not a commodity for sale," the state Supreme Court said in a decision in 1984.

Smith's activism grew from her own frustration over what she saw as a trampling of that right.

One afternoon in 1997, her daughter, who was in seventh grade, arrived home from school excited about a class trip to a popular science camp near Big Bear.

Everyone in her grade was going, she said. But Smith found out that wasn't the case. Only those who could afford the $300 price tag could attend, and that left out six classmates.

Smith took a hard line: If other kids couldn't go, her daughter wouldn't either. Instead, she bought the class materials to hold their own science camp. They made papier-mache volcanoes that spewed baking-soda and vinegar lava.

"The kids that went on the trip were jealous of us," said Jessica Baris, Smith's daughter, now 27.

Smith, 55, knew then that this was an issue she couldn't let go of. Today, she can recite dozens of examples in which she believes districts are charging illegal fees: A high school in Orange County requires students to pay $30 for a spot in the school parking lot; marching band members in San Diego have to participate in fundraisers; and seniors up and down California are forced to shell out for graduation caps and gowns.

"I can't understand why adults have no empathy for children who are left out," Smith said.

Her name and her efforts have spread by word of mouth. Parents from around the state, often afraid of retribution if they take on their own schools, seek her out, asking her to fight against fees foisted on their children. "Thanks in advance, Sally," said a letter from an out-of-town parent. 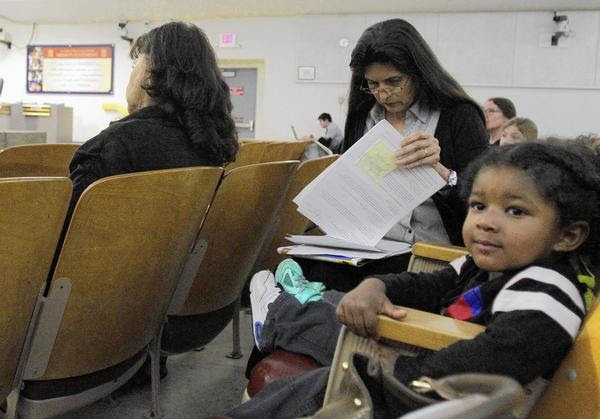 Sally Smith checks paperwork during a school board meeting. "I'm not well liked," she says. But "I'm not in this battle to make friends. I'm in it to help those kids who can't pay." More photos

"I've seen the faces of parents when they see the fees," Smith said. "They're devastated."

As Smith scanned the meeting agenda before speaking to the board on a recent evening, a woman she hadn't seen before approached her: "Are you Sally Smith?" the woman asked, like a fan approaching a star.

Maegan Savage, a mother of three, came to tell the board about her kindergartner, who had started to fall behind in class, and her other child who wasn't receiving the tutoring he desperately needed. She needed help, and someone had suggested she talk to Smith.

As Savage's children played in the grass nearby, Smith asked her what her troubles were, explained what services her kids were eligible for and told her not to hesitate to call if she needed help.

Before saying goodbye, Smith had one more question: "Were you ever required to buy pencils? Paper? Crayons? Anything like that?"

For years, Smith practiced family law, trudging unhappily through messy divorces. In her free time, however, she relished her pro bono work providing legal aid to the women who were victims of domestic violence. She eventually grew tired of the long hours and left law to raise her children full time.

Meanwhile, California schools faced years of devastating budget cuts. To cover shortfalls, officials often moved to cut personnel and programs. And some appeared to attempt to maintain programs and activities by passing the costs on to students.

The American Civil Liberties Union found that some California campuses charged students for such basic things as workbooks or lab fees for science classes. Others charged hundreds, even thousands, of dollars to participate in extracurricular activities.

"A large number of school districts were quite brazenly ignoring the law," said David Sapp, an ACLU attorney. "Sally has been a tremendous advocate for families."

The ACLU sued the state in 2010, dropping the case two years later after a law was passed requiring the California Department of Education to ensure that schools don't charge illegal fees. It also provided a path for families: a new complaint process.

“When they rule against me, they're ruling against the kids.”

This allowed a way for Smith to combine her legal skills and her advocacy. "I know how to rattle cages," she said.

San Diego school board member Barnett said that after awhile, it's "'Here comes Sally again.' But in most cases, she's right, and we need to make sure we're protecting the public and doing the right thing."

(San Diego schools Supt. Cindy Marten and four other board members did not respond to repeated requests for comment about Smith.)

At the same meeting recently, the school board agreed to prohibit all illegal fees. Board President Kevin Beiser seized upon the vote to make a statement to district families.

"Anywhere that children are being told that they must pay a fee," he said, "we will remedy that."

Smith was unimpressed. "Well, he's up for reelection," she said.

Most challenges are acrimonious, but others go smoothly.

Earlier this year, Smith filed a complaint with Principal John Dixon at Vista del Lago High School in Folsom after the school asked students to pay for art supplies and caps and gowns. Dixon said the fees weren't mandatory, and Smith was prepared for the typical back and forth. Instead, Dixon examined the issue and replied apologetically.

"I would like to thank you for bringing Vista's noncompliance to my attention," Dixon wrote. "In recent years, we have had a lot of discussion on this issue, and I was under the assumption that mandatory fees were no longer a part of our programs."

Victories, however, are rare for Smith. All but a dozen of her complaints have been denied. But she contends that it's not because her opponents are in the right but because they know the right legal loopholes.

"When they rule against me," Smith said, "they're ruling against the kids."