April 18, 2014 :: Apparently the way to fund a school bond campaign to relieve overcrowded conditions and fix aging facilities is to pack too-many like-minded potential donors into a too-small room, give them wine and cheese and canapés (and diet Coke) – tell stories about the glory days of yesteryear and shake ‘em down for checks.

So it was Thursday night in when School board President Lara Calvert-York and Superintendent Jim Morris of Fremont Unified tightened the screws in an Echo Park restaurant …in a room across the hall from the bar and 349 miles from Fremont.

Say: Wait a minute, board president whom and superintendent who from where? …in Echo Park?

Here’s the story: Dr. Morris in another life was an LAUSD teacher and administrator – focused on teaching kids to read – and later a local superintendent – and ultimately chief of staff and chief operating officer to three superintendents before he left Beaudry for Fremont Unified in 2010.

Fremont serves 33,000 students in a bedroom community between San Jose and Oakland and has increasing enrollment …its older schools are bursting at the seams and the district is faced with passing a large school bond – or busing kids or going onto a year ‘round calendar.

Sound familiar? It did to Dr. Morris – who thought of his mentor and asked himself: “What would Roy Romer do?”

He didn’t just think it; he picked up the phone and called Governor Romer. And then he got together with his school board and they put Measure E - a $650 million school bond on the ballot for June 3rd. 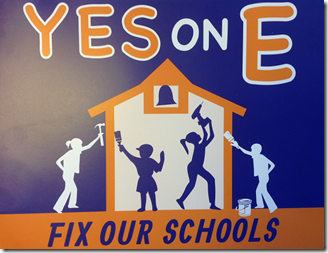 As Dr. Morris said on Thursday: “Not for iPads, but to upgrade and renovate facilities.”

"All 42 of our campuses are aging, out-of-date and need significant repairs," board President Lara Calvert-York said in a news release. "Upgrading our schools and classrooms will protect the quality of academic instruction in core subjects."

Fremont’s Measure E is the largest school bond in California this year; the $650 million is the maximum FUSD can ask. Keeping schools up-to-date is worth the cost, Morris said.

"Any Fremont resident knows the reason our property values are what they are is because of our schools," he said. "Our kids deserve to have a safe place where they can be educated and prepare to be the leaders of tomorrow."

All of that is press release talk.

Dr. Morris came back to Los Angeles and passed the hat in Echo Park with the human story: About kids in schools where the HVAC and elevators don’t work, the science labs are old, how five comprehensive high schools must share a athletic stadium,  and how the facilities are just plain tired.

And Jim brought Roy Romer and former LAUSD Boardmembers Marline Canter and David Tokofsky and literally dozens of us who fought the fight with Prop BB and Measures K, R, and Y  to build the schools L.A. needed.

And we were a team again, telling stories of how it was and how it should be – pulling together instead of apart. Sharing a vision and a goal – not for the brief shining moment that was, but for the once and future Camelot.

And test scores went up …more than they have since he left.

We listened to Roy Romer, man in the arena. At once teacher, captain, coach and cheerleader - always the most intellectually curious and enthusiastic and engaged scholar; always in the moment. He shared with us the book he’s reading and what he learned in the past week about the neuropsychology/neurophysiology of the act of reading and Socratic v. Platonic dialog and the difference between knowledge acquired from a page as opposed to a screen - and how he broke a rib in a ATV tumble (He’s 85 years old going on 19) …and how that didn’t keep him from this gathering of the clan that could and did and will again.

“I hadn’t had time to see that before.”

No one more than Romer deserved to have school named for him, a middle school with a marvelous and well stocked library. I don’t think I go too far to say he agrees with me that the library is the most important classroom in any school.

It’s too bad the library at Roy Romer Middle School is locked up because the school doesn’t have a librarian. 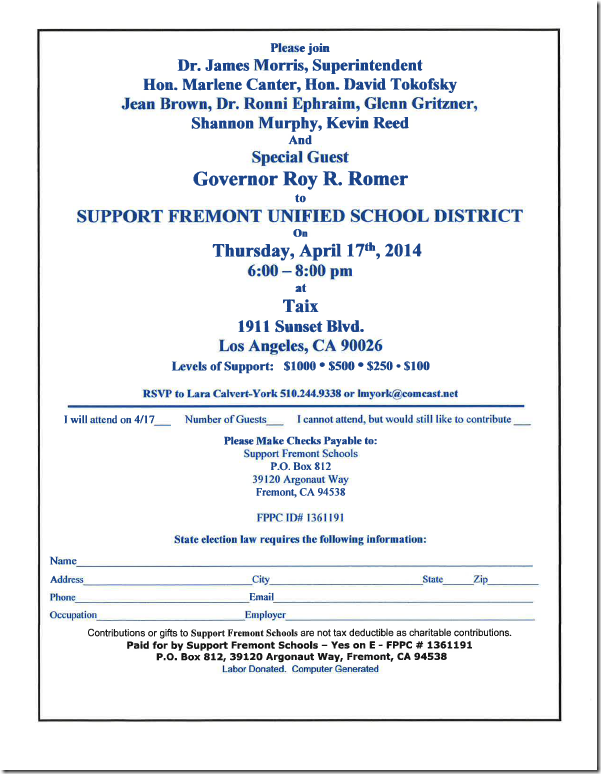 Measure E, is not fair to Seniors on fixed Incomes.
I have been paying for school bonds, parcel taxex since 1959, now that I am retired it is cruel to raise the house payments on seniors.
If this passes some seniors will lose there homes are go hungary.
This is a cruel thing to do to seniors