A state appellate court panel tentatively finds a stronger public interest in keeping the names confidential than in publicly releasing them. 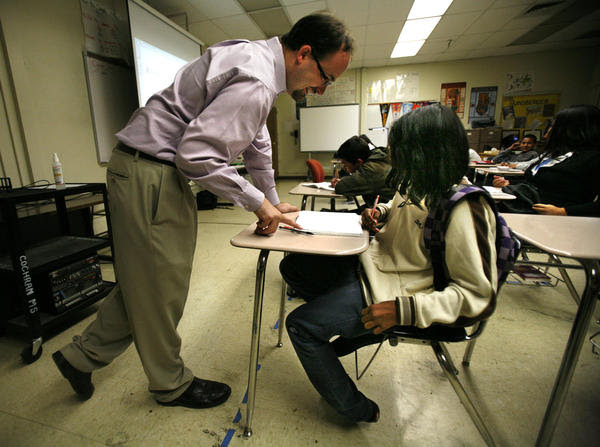 April 24, 2014, 8:16 p.m.  ::  The Los Angeles Unified School District does not need to release the names of teachers in connection with their performance ratings, according to a tentative court ruling issued Thursday.

A three-judge state appellate court panel tentatively found a stronger public interest in keeping the names confidential than in publicly releasing them. Disclosure would not serve the public interest in monitoring the district's performance as much as it would affect the recruitment and retention of good instructors and other issues, the ruling said.

The Times, in suing for access to the names, had argued that parents and others had a strong public interest in learning the performance ratings of identifiable public school teachers under the California Public Records Act.

But the tentative ruling rejected that argument and would overturn a lower court decision last year that ordered the teacher names and ratings be released to the newspaper.

"The disclosure of the names of teachers tied to their scores adds little, if anything, to illuminate how the district itself is performing its duty," the provisional ruling said.

Rochelle Wilcox, an attorney representing The Times, called the tentative ruling disappointing. She had argued that without knowing the names of teachers, the public could not monitor their performance to learn from good practices and strengthen ineffective ones.

"We believe that parents and the public have a profound interest in learning about individual teachers," she said.

Attorneys for the school district and the teachers union declined to comment on the tentative ruling.

The Times sought three years of district data, from 2009 through 2012, that show whether individual teachers helped — or hurt — students' academic achievement, as measured by state standardized test scores.

Using a complex mathematical formula, the district aims to isolate a teacher's effect on student growth by controlling for such outside factors as poverty, race, English ability and prior test scores. The district sought to use that type of analysis, known in L.A. Unified as Academic Growth Over Time, in teacher evaluations but was fiercely resisted by the teachers union, which argues that it is unreliable.

The district has given performance ratings of individual teachers and their grade levels to The Times but not their names or schools. Both Presiding Judge Tricia A. Bigelow and Judge Russell Kussman said that disclosure of teacher names would seem to serve the personal interest of parents trying to get the best for their child rather than a broad public interest. The Times argued, however, that parental interests are public interests.

But both judges indicated that they might support the release of location data to see, for instance, whether particular campuses were disproportionately staffed by weak or strong teachers.

Los Angeles County Superior Court Judge James C. Chalfant ruled last year that the ratings must be released to The Times because public interest in them outweighed any teacher privacy rights. He rejected arguments by the district and United Teachers Los Angeles that the performance ratings were confidential personnel information that, if released, would create discord, stigma, embarrassment, difficulty in recruiting teachers and other harm. He said the public had an interest in the ratings because they indicated student achievement and district choices in allocating resources.