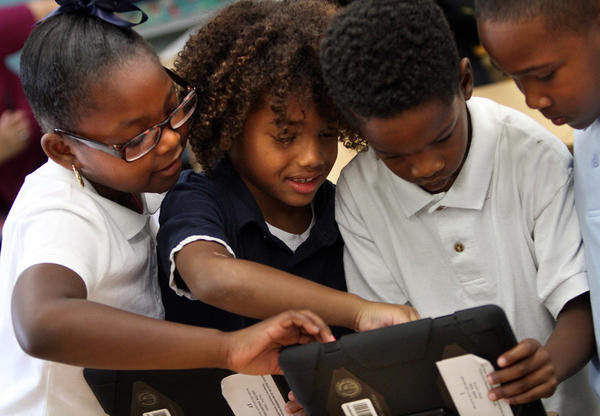 April 21, 2014, 2:27 p.m.  ::  The Los Angeles County District Attorney’s Office has reviewed an internal L.A. school district report on its iPad contract and concluded that criminal charges are not warranted.

The report, which has not been released publicly, raises issues about the handling of the bidding process, according to L.A. Unified School District officials who spoke anonymously because they are not authorized to discuss the review. Apple’s iPad was selected as the device to be provided to every student, teacher and campus administrator in the nation’s second-largest school system.

The findings of the internal inquiry, conducted by the inspector general for L.A. Unified, were reviewed in March by the district attorney, said Jane Robison, a spokeswoman for that agency.

Prosecutors from the Public Integrity Division focused on whether there was a criminal conflict of interest, said Robison. “We closed it out in March,” she said. “No charges will be filed.”

For one, scoring sheets used to rate different vendors competing for the contract had been lost, somewhat hampering the investigation, they said.

The initial contract, awarded last June, was worth about $30 million, but the cost of the initiative will exceed $1 billion. About half of that would go to the provider of the device and the curriculum software. So far, Pearson has provided the curriculum.

After winning the bidding competition, the iPad was considered locked in for the entire multi-year effort, but officials now are considering other devices and other providers.

Another matter raised in the L.A. Unified probe was that one of those on the review panel evaluating the bids owned a moderate amount of Apple stock, officials said. That individual may have not disclosed this conflict early enough, they said, and remained on the panel.

Supt. John Deasy, who has acknowledged owning some Apple stock, was not involved in evaluating the bidders. He later sold his holdings.

Unfortunately the line “The LA County District Attorney’s Office declined to file charges in the  allegations because….” has been so frequently repeated in cases involving LAUSD, other LA County school districts and the Department of Family and Children’s Services that it has become a a mantra of stasis, an excuse for the status quo and the paralysis of progress.

It was the sad history L.A. D.A. refusing to prosecute because they couldn’t guarantee a conviction that returned serial abuser Steven Rooney to schools …where he could molest middle schoolers instead of high school students.

The good news is that children will not be abused this time; I worry that the taxpayers will not be so lucky.

Once again "Not Change We Can Believe In." On Belmont they got rid of the top investigator to whitewash this. Here is their big mistake. They forgot that it is illegal to buy them with school construction bonds anyway. In 2004 former A.G. Bill Lockyear wrote and Attorney General's Opinion on this subject and on page 2, item A, in italics it says no purchases of general fund items with school construction bond money. iPads and other electronic devices are stated to replace textbooks which are general fund items. I have gone to the A.G. and they do nothing. I saw two of them coming into a board meeting one week after CORE-CA wrote the A.G. on this issue and suddenly they did not know who they were. Is this the head in the sand for the D.A.'s office now with supposed new management? Or is it really the same old gang running the show there still? Soon we will find out. Right Jackey Lacey. You need to come out and explain yourself as to why no one is doing anything about the illegal purchases of iPads and the illegal replacement of Marguerite LaMotte.

Should anyone be a practicing attorney if they cannot find two U.S. Supreme Court Decisions? Two California A.G. Opinions and pages of state law, rules and regulations which are being broken. 100% of the time people say "NO WAY!!!"