L.A. Times editorialist: “WHY MY FAMILY IS OPTING OUT OF THE COMMON CORE TESTING” + smf’s 2¢ 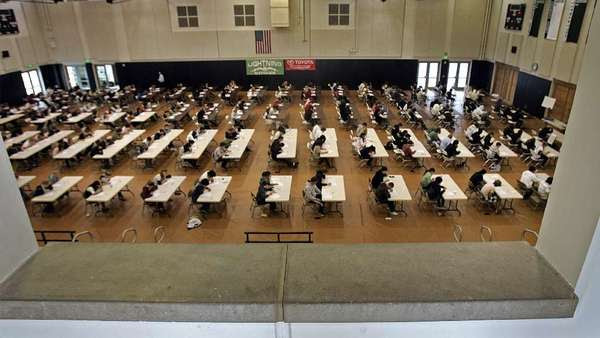 April 8, 2014, 11:47 a.m.  ::  Sixteen consecutive years of the state's standardized testing are now under my belt, all of them spent covering the accountability program as a journalist, as well as having one or more of my three children filling in bubbles in public school for the annual assessments. And on the 17th year, the last spring that I have a student scheduled for testing, it's time for a rest.

My 16-year-old daughter is in standardized-test burnout mode, and to a lesser extent, so am I. Juniors are the only ones taking the test in high school this year in California; they start this week at her school. Eleventh grade also happens to be a big year for all kinds of tests. The PSAT. The SAT. The SAT 2 subject tests: three of them. There was a brief winter flirtation with the ACT. And next month, four Advanced Placement tests.

The California standards tests were never useful for my kids; of course, they're not designed for use at such a granular level. After one of the earlier versions gave a low score to my eldest on reading comprehension, my husband and I shrugged and knew there had to be something wrong with the test. That's the daughter who is now finishing off her dissertation for a doctorate in literature. (And yes, I know the chances are slim that she will be supporting me in my old age in the manner to which I would like to become accustomed.)

As a journalist, reviewing an early state test that had been leaked to the paper by a teacher, I saw how thin and fault-riddled it could be. One question asked students to mark what they thought would be the best title for a certain reading passage. The answer the test sought was obvious; the title was direct and on topic, though flat and uninteresting. There was another choice, a better one, it seemed to me. It wasn't as obvious an answer; it struck me as the one that a director would pick for a movie rather than the one a test creator would pick. The difference, if you will, between “Star Wars” and “Luke Travels in Space and Shoots Down a Big Weapon.”

The schools in Laguna Beach, where I live, don't go into testing high-alert each spring, for which I'm grateful. A couple of math classes gave a retroactive grade bonus to students who scored proficient or advanced. There are teachers who prep heavily for the spring test and those who don't. One year, my younger daughter's history teacher gave the class three weeks of straight practice tests. Later, my daughter noted with surprise how many of the questions in those practice tests had appeared on the official one, quite possibly because the state, to save money, repeated so many questions on the tests from year to year. Her English teacher that year -- the inspiring, engaging one -- surprised the students just as much by announcing she would do no test prep. She had given them her best all year, she said, and it was time for them to go forth and do their best. Her students got three more weeks of learning that year. I could tell you how my daughter fared on the tests, but an experimental universe of one doesn't yield meaningful results.

Opting out has occurred to me before, but that seemed selfish. The idea of the tests is to look at the larger picture of how much progress the schools, the districts and the state are making. Participation was the socially responsible thing to do.

The scores have risen impressively in our district, but I can't honestly say that I have noticed an improvement in actual learning over the years. What has been noticeable: more teachers who don't feel they have time to do the creative projects with their students that they used to do. There was one elementary school teacher I particularly wanted my youngest to be taught by; she conducted poetry tea parties with her students, nurturing a love of writing, listening to writing and some good old-fashioned manners. But by the time my daughter was lucky enough to be assigned to that teacher, the poetry teas had disappeared in favor of covering everything in the curriculum that would be on the test.

I'm hoping the Common Core curriculum standards will help, and several teachers have told me that they already do. The related curriculum covers fewer topics, allowing more time to delve into each.

I envy the home-schoolers, who take their children on exciting field trips, cover the curriculum quickly and efficiently, tackle more interesting projects, minimize the testing, maximize the learning and still have time to head for the beach during uncrowded weekdays. They seek out a local Audubon wilderness preserve that offers hands-on science lessons, at nominal cost, for all school-aged children. The public schools aren't allowed to bring their classes, the preserve's manager told me, because the lessons are adapted to the skills needed in the natural sciences rather than being aligned with the California curriculum as the state requires of field trips.

When I attended a talk in Los Angeles by Erica Jong a few months ago, I drove home wishing that my 16-year-old, who loves creative writing and has an over-tendency to perfectionism, had heard this strong, articulate woman talk about her first failure while writing “Fear of Flying,” and the anxieties about writing that never really disappear. I had an extra ticket, but Aviva had far too much homework that night.

My guilty sense was that I had gone along with the mind-numbing academic program for far too long; done too much to prep her for a life of tests and not enough to prep her for the pursuit of great and original adventures.

I'm not one for whining about standardized tests. (Not until now, anyway.) They have certain, limited uses. At their best, the state tests could be used to guide better teaching; at their worst, they are used as the main measure of educational quality. They're an imperfect fact of life, and one of the important lessons students get out of public schools is that life is not perfect. We deal with it.

But this year, knowing how much Aviva dreaded yet another bubble test, the words just came out: “We are allowed to opt out, you know.” (Actually, the field test is administered by computer, not a fill-in-the-bubble form.) She perked up so markedly, I had to write the waiver note to the school. The decisions we make as parents sometimes have to be different from those we make as a member of the larger society.

Her test results could, in an immeasurably small way, have helped the state draw up better exams in the future. Right now, I think the small, joyous rebellion of saying no, during the last year we have the chance, is more important for both of us. Take that, world of Scantron.

Karin Klein is an editorial writer covering education, environment, religion and culture. She occasionally contributes columns to the op-ed page. She is the 2006-07 winner of the Eugene C. Pulliam Fellowship for Editorial Writers, under which she spent a year studying and writing about the first wave of children diagnosed with attention deficit disorder, now that they have reached adulthood.
Klein was previously an assignment editor with The Times, and also has worked at the Orange County Register, San Jose Mercury News and Sacramento Bee. She attended Wellesley College, did her graduate work in journalism at UC Berkeley, and is currently an adjunct professor of journalism at Chapman University in Orange. She lives in Laguna Beach, where she is a volunteer naturalist.

California has been passé/blasé about the Common Core – and the No Child Left Behind testiness.

No more. Now we have the so called “Common Core State Standards” – called that because “National Standards” would be

And having two flavors of national tests (PARCC and Smarter Balanced) doesn’t exactly make them “national” either.

But isn’t Smarter Balanced a brand of margarine? What if some of us want want butter?

The Alderney
Said sleepily:
“You’﻿d better tell
His Majesty
That many people nowadays
Like marmalade
Instead.”

The Common Core State Standards were dreamt up by the National Governor’s Association,  completely independent of the hundreds of millions of dollars invested in them by the Bill and Melinda Gates Foundation and the political efforts by the Arne Duncan Department of Education – because governors by their very nature are inherently disinterested in money and politics.  But in the end if the CCSS and their tests aren’t accepted by parents like Ms Klein – or if they don’t pass muster with the good citizens of Indiana and Oklahoma and the other states of the union they are doomed. Federal law says that the results of tests only count if 95% of students take them. If only 5% of parents take the route espoused by Ms. Klein the whole program is as doomed as the contents of a vegetable cart in the first shot of a chase scene in a car chase movie.