PARENTS MUST GIVE OK BEFORE LAUSD iPADS SENT HOME WITH STUDENTS 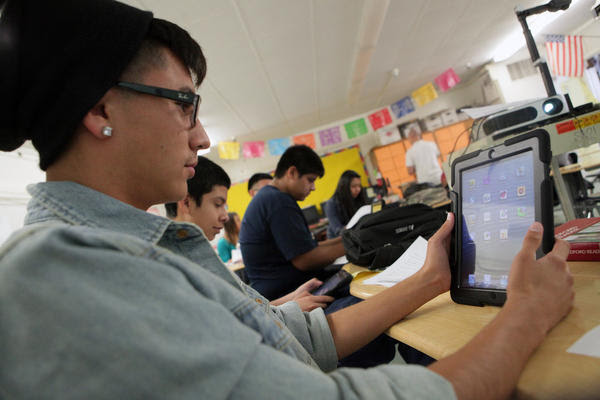 April 25, 2014, 4:55 p.m.  ::  The Los Angeles Unified School District will seek the approval of parents before sending iPads home with students, under an updated policy.

"That is a wonderful development," said school board member Monica Ratliff. "Parents need to be clearly notified that the device is going home, and that it will go home only if they agree to it.”

Officials chose this approach in response to families who objected to earlier plans, which would have distributed tablets for home use among all students.

The new policy clears away one more uncertainty from a $1-billion-plus effort to provide a device to every student, teacher and campus administrator in the nation's second-largest school system.

For the moment, no devices are going home with students, but that is expected to change by the start of the next school year if parents sign consent forms.

Last fall, students at some schools briefly took iPads off campus, but administrators called them back after some students deleted security filters so they could surf the Internet freely. The devices were stored at some campuses; at others, students used them only during the school day. Forty-seven schools took part in the initial rollout of the iPad project.

Parents also have expressed other concerns. Some said they do not want to be responsible for the expensive tablets, which cost more than $750 apiece. The district says it does not intend to make families financially liable unless the computers are handled irresponsibly.

Parents also said they feared their children would be targets for assaults if the devices were in their backpacks on the way to and from school.

Officials countered that the iPads would have no value for thieves. The district can permanently disable any lost device, technical specialist Marlon Shears told the district technology committee Thursday.

L.A. Unified is looking at ways to publicize the message that thieves might as well leave students alone. At the meeting, the district showed off a sample public-service video that could air on local television and the district website. School police also have told local pawnbrokers that the tablets have no commercial value.

Ratliff chairs the technology panel, which was scheduled to shut down earlier this year. Ratliff said she intends to hold one more meeting because she is still waiting for answers to some of her questions about the project.