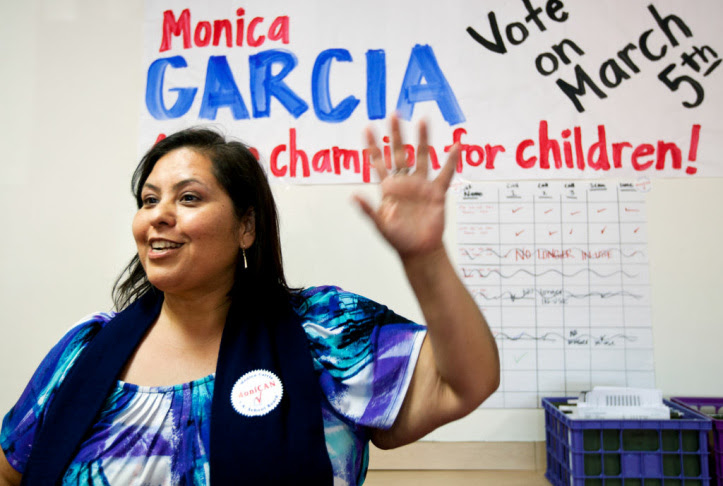 July 2nd, 2013 Update 1:08 p.m  ::  Los Angeles Unified’s Board of Education elected Richard Vladovic — the board’s San Pedro-area representative — to be its next board president on Tuesday

“I’m humbled. When I began as a playground worker many years ago, I never saw the stars, and I’m seeing stars now,” he said after the 5-2 vote was tallied.

“I am the only parent on the board,” said board member Tamar Galatzan, the only other nominee before the vote.

“Sometimes we differ, sometimes we argue. But Monica Garcia has shown leadership when we were down on our knees and being beaten up for the last few years. And she saved this district in terms of keeping us together and always giving us hope,” Vladovic said in praise of Garcia.

Vladovic began his lifelong education career in L.A. Unified. He started as a teacher in Carson. He served as principal of Locke High School and two other campuses.

He then oversaw a teacher training academy and was appointed administrator of an L.A. Unified area district that included 72 schools. Vladovic served as superintendent of the West Covina Unified School District before being elected to the L.A. Unified school board in 2007.

He won that race with the endorsement of then-L.A. Mayor Antonio Villaraigosa and won re-election in 2011 with the financial help of philanthropist Eli Broad and the union that represents L.A. Unified principals.

Previously: The L.A. Unified School Board on Tuesday elected Richard Vladovic as its new president in a 4-3 vote.

The position has no special privileges or additional pay, but that doesn’t mean it’s not an important job, according to UCLA education researcher John Rogers.

“People look to one individual as the head of the board, as the key spokesperson for the direction of the board and as the person who has the strongest relationship with the superintendent in developing a working plan on how the district should move forward,” Rogers said.

Prior to the vote, newly-elected board member Monica Ratliff took the oath of office.

The new president will play a key role on a variety of important issues.

For the last six years that leader has been board member Monica Garcia. A new rule written by her critics on the board keeps her from running for president again.

Garcia wouldn't say ahead of the vote whom she would support as next president.

In her time as board president, Garcia successfully pushed plans to overhaul teacher evaluations, increase the number of charter schools and other non-traditional schools, and to hire John Deasy as superintendent.

Many policies were approved on split votes between supporters of Garcia’s agenda and board members who sided with the teachers’ union in criticizing that agenda.

That split isn’t as clear-cut with the new board. UCLA’s Rogers said there’s a four to three majority of teachers, but two of them aren’t considered automatic pro-union votes.

“What we may see now is that there’s a more independent board, a board that is neither following a powerful mayor’s voice nor following the teachers union voice,” he said.

In the race for president, board members Richard Vladovic and Steve Zimmer were said to be the candidates with the most support. Vladovic did not respond to requests for comment. Zimmer sounded indifferent.

“If my colleagues ask me or think that I’m the best person to serve, I would certainly serve but it’s not something I’m campaigning for or coveting,” Zimmer said.

It’s unclear how a new board president will affect relations with Superintendent Deasy. Garcia has been a strong ally of the superintendent. Zimmer said Deasy’s the best person to be superintendent, but added that he would question his policies in the spirit of checks and balances.

Deasy downplayed the role of the board president.

“The leadership is a person. It’s how the board as a team will work together to support students’ rights. I’m really looking forward to working with the new board,” he said.

Deasy’s going to have a front row seat for the election of the board president. He’ll be chairing the meeting during the nominations and the vote.