Pasi Sahlberg was Finland's chief inspector of schools … until it was decided teachers did not need value-added assessment and surveillance. Now his job is global spokesman for the Finnish message. 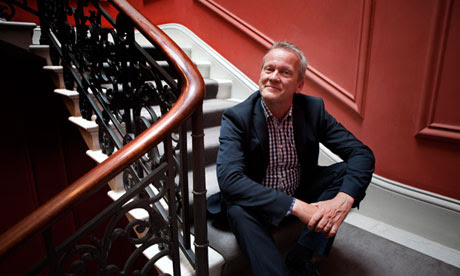 Monday 1 July 2013 20.00 BST  ::  Imagine a country where children do nothing but play until they start compulsory schooling at age seven. Then, without exception, they attend comprehensives until the age of 16. Charging school fees is illegal, and so is sorting pupils into ability groups by streaming or setting. There are no inspectors, no exams until the age of 18, no school league tables, no private tuition industry, no school uniforms. Children address teachers by their first names. Even 15-year-olds do no more than 30 minutes' homework a night.

The national curriculum is confined to broad outlines. All teachers take five-year degree courses (there are no fast tracks) and, if they intend to work in primary schools, are thoroughly immersed in educational theory. They teach only four lessons daily, and their professional autonomy is sacrosanct. So attractive (some might say cushy) is a teacher's life that there are 10 applicants for every place on a primary education course, and only 10-15% drop out of a teaching career.

It sounds like Michael Gove's worst nightmare, a country where some combination of teachers' union leaders and trendy academics, "valuing Marxism, revering jargon and fighting excellence" (to use the education secretary's words), have taken over the asylum.

Yet since 2000, this same country, Finland, has consistently featured at or near the top of international league tables for educational performance, whether children are tested on literacy, numeracy or science. More than 60% of its young people enrol in higher education, roughly evenly divided between universities and polytechnics.

Even the management consultancy McKinsey, which has spearheaded the global movement for testing, "accountability" and marketisation, acknowledges that Finland is top. The country's defiance of current political orthodoxies appears to do little economic harm.

According to the World Economic Forum, Finland ranks third in the world for competitiveness thanks to the strength of its schooling, which overcomes the nation's drawbacks, in the forum's view, such as restrictive labour market regulations and high tax rates.

The story, at least for Guardian readers, sounds too good to be true. Is it possible to pick holes in it? I met Pasi Sahlberg, a rather dour (though not, I am told, by Finnish standards) 53-year-old former maths teacher and education academic, during his recent visit to London.

Sahlberg, who now heads an international centre at the education ministry, was Finland's last chief inspector of schools in the early 1990s before politicians decided that teachers could be trusted to do their jobs without Ofsted-style* surveillance. "I only ever inspected one school," he says.

*[Ofsted is the British system of school and teacher accountability, based on student test scores and inspection …like NCLB and WASC accreditation combined.]

Now he has emerged as the global spokesman for Finnish schooling. His book, Finnish Lessons, has been translated into 15 languages, including Chinese, Russian and Arabic, and each day he receives two or three invitations from across the planet to give talks or lectures.

I met him the day after Gove had announced his plans to transform GCSEs*, restoring traditional three-hour exams to their former glory. He's never met Gove, but what would he say to him if he did? "I would say: 'I am afraid, Mr Secretary, that the evidence is clear. If you rely on prescription, testing and external control over schools, they are not likely to improve. The GCSE proposals are a step backwards'."

*[The General Certificate of Secondary Education (GCSE) is an academic qualification awarded in a specified subject, generally taken in a number of subjects by students aged 14–16 in secondary education in England, Wales and Northern Ireland.]

He is similarly dismissive about Gove's enthusiasm for academies and free schools, largely modelled on those in Finland's neighbour, Sweden. "In Sweden," Sahlberg says, "everybody now agrees free schools were a mistake. The quality has not improved and equity has disappeared. If that is what Mr Gove wants, that is what he will get."

Finland hasn't always been an educational superstar. Before the 1970s, fewer than 10% continued their education until the age of 18. The schools were similar to those of England in the 1950s, only worse. After taking tests at the age of 11, children whose results were in the top 25% went mostly to private grammar schools – if their parents could afford the fees. Sahlberg himself, initially educated in a tiny village primary in northern Finland, where both his parents were teachers, was one of the last to go through this system.

By the time he left school in the mid-1970s, the move towards peruskoulu (or comprehensives), had begun, heavily influenced by British thinking. Mixed-ability teaching, teacher education reforms, abolition of the national curriculum (once 700 pages), and devolution of schooling to local authorities followed later.

While England began to dilute its comprehensive system almost as soon as it was established – in the early 1980s, the Tories introduced "parental choice" and offered subsidised places in elite private schools – Finland was further extending its ideal of the common school.

Like England, it had a vociferous lobby demanding a return to selection as well as Swedish-style free schools. Business leaders and rightwing politicians argued that comprehensives held back the gifted and talented and jeopardised the country's economic future.

But the critics were silenced early this century when the first results from the Programme for International Student Assessment (Pisa) emerged. All of a sudden, politicians and educators flocked to Finland in their hundreds, seeking the secret of its success. Finnish education became almost as big a global brand as Nokia. "Pisa stopped the arguments for privatisation and national testing," says Sahlberg. "Many say it saved the Finnish school system."

Sahlberg is reluctant to attribute Finland's economic success to its schools. "Some would say it's the other way round: we have educational success because we have economic success." To him and other Finns, equity is the schools' greatest achievement: the gap between high and low achievers is the smallest in the world and nobody talks of failing schools because there isn't that much difference between schools' results.

Sahlberg insists: "Pisa is not what we are about. League tables are not a good measure of a school system. We never aimed to be the best in education, only to have good schools for all. Equity came before a 'race to the top' mentality." Like many other educational researchers, he argues that most pupil achievement is explained by factors outside of school authorities' control and that, if politicians wish to elevate children out of poverty, they should look to other public policy areas.

Which leaves the question of whether Finnish schooling is exportable. Finland is an unusually homogeneous society: child poverty is low, and the ratio of income share between the richest 20% of the population and the poorest 20% is only a little over four-to-one, against nine-to-one in the UK. Its proportion of foreign-born citizens, moreover, is under 5%, and was much lower a decade ago.

All this, critics argue, makes it easy for Finland to put all children through comprehensives without social or educational strain. Other critics point to the Finnish language which, like Korean (South Korea is also near the top of the Pisa tables), is written almost exactly as it is pronounced. Young Finns and Koreans have little trouble with spelling, which not only makes reading and writing easier, but leaves more time for other subjects.

Sahlberg doesn't wholly dismiss either of these arguments, but suggests that other influences outside the schools are more important. Finnish adults, he says, are the world's most active readers. They take out more library books, own more books and read more newspapers than any other nation.

"Reading is part of our culture. At one time, you couldn't marry unless you could read. If you belonged to the Lutheran state church, you had to go a camp for two weeks before confirmation, as I did. I had to read the Bible and other religious books to the priest and answer questions to show I understood them. Only then could I be confirmed and only if I was confirmed could I get a licence to marry in church. That is still the case. Now, of course, you can get married anywhere, but 50 years ago there were very few options other than marrying in church and, 100 years ago, none at all."

There is another issue. Finnish education isn't quite what it seems. Exams and competitive pressures may have been eradicated from schools, leaving teachers and pupils free for the co-operative pursuit of cultural, creative and moral improvement. But this educational idyll eventually comes to an abrupt end.

Pupils who stay beyond 16, as more than 90% do, move into separate (allegedly self-selected) streams: "general" and "vocational" upper secondary schools. Though there is some crossover between the two, the vocational school students usually go to polytechnics or directly into jobs.

Only the general school – catering for what, in effect, is the academic stream – offers the 155-year-old national matriculation exam, a minimum requirement for university entry. Wholly financed from student fees (in a system in which everything else, including school meals, is completely free until university graduation), the exam comprises traditional essay-based external tests covering at least four subject areas. To study a particular subject at a particular institution, students must take yet more exams set by the universities themselves.

As Sahlberg acknowledges, Finland hasn't abolished competition; it has just moved it to a different part of the system. "It is getting tougher and tougher to reach the end points," he says. "It is the Finnish compromise."

In other words, although Finland unarguably achieves better results for more of its children than almost any other country in the world, success may (and I emphasise "may") be attributable less to its laid-back school regime than to the children's expectations of later competitive pressures. Exporting what appear to be educational success stories is a dubious enterprise, because it is so easy to misread how another country's system works and to discount its cultural background.

Sahlberg, I think, would agree. He is an odd, diffident sort of ambassador, spreading the message about "the Finnish miracle" but not really believing in the data that supposedly proves that it works. His fear now is that Finland's educational success is breeding complacency.

"Ask Finns about how our system will look in 2030, and they will say it will look like it does now. We don't have many ideas about how to renew our system. We need less formal, class-based teaching, more personalised learning, more focus on developing social and team skills. We are not talking about these things at all."