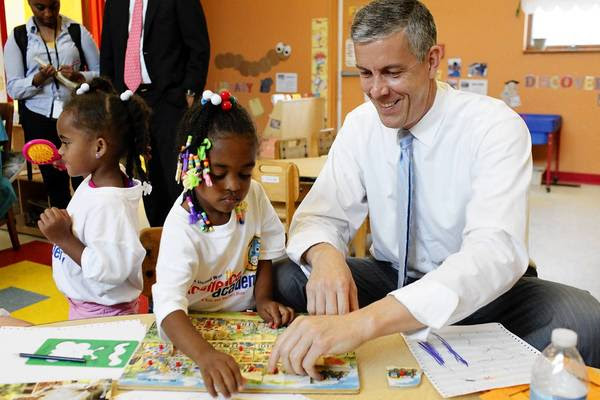 Education Secretary Arne Duncan visits a Louisville, Ky., school last month. "I actually use the California model, and not in a good way, as I travel the country," he said. (Angela Shoemaker / Courier-Journal / June 20, 2013)

July 15, 2013, 6:00 a.m.  ::  WASHINGTON — California is almost always there to boost President Obama's policy agenda as he fights fierce headwinds in Congress, working with the executive branch to carry out the administration's vision on healthcare, renewable energy and clean air.

But when the topic shifts to overhauling education, the state has become one of the administration's biggest headaches.

California has defiantly refused to follow the administration's lead in grading the performance of teachers and using those measurements to reward the best teachers and punish the worst. The state is one of very few that have told Washington that under no conditions will it put in place the type of teacher evaluation system Obama has championed.

As a result, the administration has not given California a waiver from the requirements of the federal No Child Left Behind law, leaving thousands of local schools exposed to expensive federal sanctions.

California is one of the last holdouts in the country; the administration has succeeded in persuading reluctant officials in Illinois and Texas to come aboard. State officials say they are resolved to stand firm, regardless of the consequences.

The obstinacy has frustrated the Education Department, where Secretary Arne Duncan and his top aides have been trying to create a uniform system that can be used to reward the best teachers and move the worst out of the profession. Now they see that drive stalling in the nation's most populous state. That has made for awkward politics; the administration is not accustomed to California aggressively throwing sand in the gears.

The standoff reflects the enduring influence of the California Teachers Assn., which long ago established the state as a bulwark against the national movement to base teacher evaluations more heavily on standardized tests. The CTA, the most generous campaign donor to state officials, maintains a tight grip on Sacramento politics.

The union's position has been embraced by Gov. Jerry Brown and State Supt. of Public Instruction Tom Torlakson, two old-guard Democrats who are loath to antagonize labor. Their aides speak about the president's teacher accountability plans with language a Texas official might use to describe Obama's healthcare plan: intrusion on local control, unnecessary layer of bureaucracy, costly, unwarranted federal mandate.

"We think the federal government is foolish to keep insisting on this," said Richard Zeiger, Torlakson's chief deputy. "It just doesn't fit with the style of reform we are pursuing in California."

Duncan, on a visit to California a few weeks ago, expressed bewilderment that the state could find the plan objectionable.

"I actually use the California model, and not in a good way, as I travel the country," he said. "There are about 300,000 teachers in California. The top 10% arguably are among the best in the world. The bottom 10% maybe shouldn't be teaching. No one in California that I have met can tell me who is in that top 10% and that bottom 10%."

But the head of the union, whose parent organization recently anointed Brown as "education governor of the year," says California won't be bullied into "jumping on the bandwagon."

"Why is California standing out there alone?" said CTA President Dean Vogel. "We have a governor with some vision. We have a state superintendent of public instruction who understands the dynamics of teachers and learning."

Unable to find a way forward with the state, the administration has agreed to allow nine California districts, including Los Angeles, Long Beach and Santa Ana, to submit their own applications for a waiver from the No Child Left Behind law. If successful, the districts will have made a rare end run around the CTA and will have shifted power away from state bureaucrats heavily influenced by the union to a new, independent panel that they would jointly create.

"It may be inspirational for the whole state to see these districts coming together," said Rep. George Miller (D-Martinez), the senior Democrat on the House Education Committee. "They are going to be the architects of the system."

The law, signed by President George W. Bush in 2001, requires schools to hit benchmarks by 2014 that are proving impossible in many districts around the country. Among the goals are having 100% of students attain grade-level reading and math skills, which almost no California school is on track to achieve.

Districts that fail to achieve those goals face having to spend millions of dollars on private tutoring firms and the busing of students to better-performing schools. Eventually, schools that repeatedly fail to meet the law's goals could be forced to restructure their staffs and cede control to private management companies or the state.

With Congress stalemated on revising the law, the administration has leveraged the desire of school districts to get out from under those threats into partnerships. It has given waivers to states that embrace parts of Obama's education vision, particularly the uniform teacher evaluation system.

The CTA worked to get Obama into the White House, but has tangled repeatedly with the administration since. Vogel criticizes the administration's policy as the product of a "reform" movement led by "hedge fund managers and bankers" who don't understand the ways of the classroom.

California officials appear to be gambling that the administration will yield on No Child Left Behind whether the state meets its conditions or not, noting that lawmakers of both parties believe the federal law is flawed.

Washington officials say the state's position is delusional. Now that so many other states have met the administration's demands, they say, the Education Department can't start carving out exceptions for California.

Miller, one of the original authors of No Child Left Behind, has implored fellow Democrats in Sacramento to work with the administration, to no avail.

"There are elements in the California educational establishment that don't want any accountability," he said, and he warned there would be a price to pay.

"The administration is trying to provide relief for districts who want to move to the future," Miller said. "For districts who don't want to do anything, they will have to live with the consequences."