NEW MEMBER RATLIFF IS KEY VOTE FOR VLADOVIC AS L.A. BOARD PRESIDENT 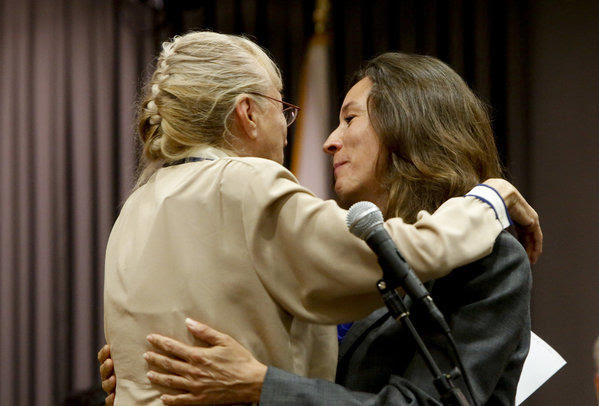 July 2, 2013, 4:42 p.m.  ::  The Los Angeles Board of Education on Tuesday ushered in newly elected Monica Ratliff, who immediately played a key role. She was the swing vote to elect Richard Vladovic as president of the seven-member body.

The annual meeting to select a president was part ritual, part political foreshadowing. Vladovic's ascendancy symbolized the waning influence of the city's mayor over education -- and the board majority's increasing willingness to exert more control over L.A. schools Supt. John Deasy.

But the assertiveness of former teacher Ratliff at her first board meeting also was noteworthy. Ratliff's first role was to calm her mother, who cried with joy as she handled the honor of swearing in her daughter -- first in Spanish, then in English. In her acceptance speech, Ratliff, citing her upset win, said the impossible could be achieved. And she called for unity in accomplishing the tall task of providing all district students with the education they need to succeed.

At Tuesday's meeting, as the board prepared to choose its leader, Ratliff executed two striking parliamentary maneuvers, just after colleagues had nominated Vladovic and Tamar Galatzan for the post of president.

First, she moved that each candidate explain what he or she would do with the job. That motion passed without opposition. Then, she asked each to announce an intended pick for the role of board vice president. That motion also passed.

The motions forced Vladovic and Galatzan, in effect, to give campaign speeches. Vladovic focused more on big-picture issues -- his passion for doing the best for every child and the imperative to treat parents and employees with respect and to hear their voices in affairs of the nation's second-largest school system. Galatzan focused on specific proposals that would make meetings more effective and also more representative of groups with a stake in the outcome.

The board president has no greater legal authority than other members but runs the meetings and frequently represents L.A. Unified. And, sometimes, the president is able to command greater resources and authority within the bureaucracy.

Vladovic said he would choose Steve Zimmer as his vice president -- a move that may have helped secure Zimmer's vote. Galatzan said she would ask Ratliff to fill that role.

The board voted first on Vladovic's nomination because his name had been put in first. Marguerite Poindexter LaMotte saw to that. She nominated Vladovic before Supt. Deasy, who was presiding over the election, could finish his first sentence introducing the item for action.

The first two yes votes for Vladovic were LaMotte and Bennett Kayser. Ratliff was polled next by board parliamentarian Jefferson Crain. Ratliff hesitated, then cast her vote for Vladovic.

Vladovic voted next for himself, and his election was sealed.

With the outcome settled, Zimmer then also voted for Vladovic, making the finally tally 5-2. The no votes were Garcia and Galatzan.

Ratliff's support for Vladovic ended any chance for Zimmer to jump in with a bid to become president. Before the meeting, Zimmer had been widely considered the alternative to Vladovic.

Vladovic and Deasy have become adversaries behind the scenes, even though Vladovic was elected twice as part of a bloc endorsed by Villaraigosa, a Deasy enthusiast. As usual, the interaction between Vladovic and Deasy in public Tuesday was courteous and deferential.

LaMotte had been a critic of recent board president elections that extended the six-year run of Garcia as the leader. She had angrily accused board colleagues of backroom deals and trade-offs.

On Tuesday, she was reserved through much of the meeting, but she spoke up in response to Ratliff's eye-catching maneuvers.

LaMotte offered that "only new people" were able to make motions that changed the usual election process.

"I have a feeling not in the future," Ratliff answered, laughing.

LaMotte then laughed as well.

After the meeting, LaMotte said there remained a problem with trust among board members and between the board and the superintendent. But she said the openness of the proceedings, including Ratliff's motions, were a step in the right direction.

She also was happier with the outcome. LaMotte has been a critic of Garcia and has strong ties to Vladovic.