An L.A. family's dramatic shift toward healthful eating follows the unexpected death of a family member. Now, a daughter's recipe will be served in L.A. schools. 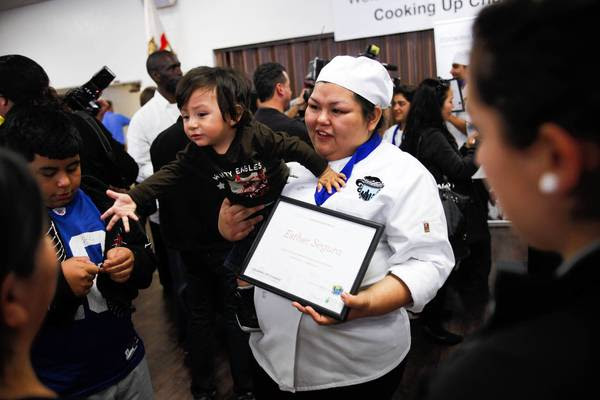 Esther Segura, center, holds her nephew, Andy Martinez, as she greets her family after winning a cooking competition in January. She has helped her family shift toward healthier eating after the unexpected death of her younger sister in 2008 and her parents developed diabetes and high blood pressure. (Bethany Mollenkof, Los Angeles Times / March 11, 2010)

July 7, 2013, 7:49 p.m.  ::  The savory smells of Sunday brunch wafted through the Los Angeles apartment where Manuel Segura, his wife and their close-knit brood gathered for their weekly highlight of food and family time.

But that wasn't menudo cooking on the stove. Segura's wife, Norma, no longer simmers tripe and pig's feet overnight for the rich stew she once served with fresh tortillas. Nor does she fry pork spareribs with tomatillos, serrano peppers, cilantro and onions. Those dishes — family favorites from Segura's hometown of Jalisco, Mexico — have been banished from the table.

Instead, the day's entree is sauteed tilapia with garlic and lime juice, a dish without the whopping sodium content and less than half the cholesterol of menudo. Daughter Esther, 17, who won an L.A. Unified cooking contest this year and has helped her family make the switch, sliced tomatoes, cucumbers and radishes for a colorful salad.

The family's dramatic shift toward more healthful eating is rooted in tragedy: the death of the Seguras' youngest daughter five years ago. During a family barbecue, 11-year-old Xiomara had told her mother that her head felt "strange." Moments after she went inside to rest, a blood vessel in her brain ruptured.

Her unexpected death plunged the close-knit family of eight into depression. Health and weight problems soon followed. Manuel Segura, now 60, said he could hardly eat or sleep even as he continued to work long hours as a delivery man for an auto parts store. Eight months after his daughter's death, he woke up one morning gasping for breath. His eldest son, Jose, rushed him to the emergency room, where he was found to have diabetes and high blood pressure.

The Seguras don't know whether the stress from Xiomara's 2008 death affected their health — Norma Segura has a family history of diabetes, Manuel Segura does not — or whether lifestyle and genetics destined them to suffer from diseases that disproportionately plague Latinos.

According to the U.S. Department of Health and Human Services, Latino adults are 1.7 times more likely to have diabetes than non-Latino whites. Three in four Mexican American women are overweight or obese.

But the cause hardly mattered. There was no real choice but to make radical changes.

"If we weren't here for our younger children, what would become of them?" Norma Segura said.

Today, red meat is out — and with it carnitas, chorizo, carne asada and other quintessential Mexican food. Brown rice and whole grain tortillas are now standard fare. Water has replaced soda. Substituting for salt: garlic powder, pepper, lemon, achiote and coriander. And the refrigerator is now filled with fresh produce that the children had never eaten much — tomatoes, limes, carrots, green peppers, green beans.

The change hasn't been easy. Norma Segura said she gets tired of cooking chicken and misses her old diet. "I wasn't used to lean meats and hardly ever cooked vegetables because the kids didn't like them," she said. "But I've adapted."

Over time, however, the family's altered diet has produced striking results.

Daughter Diana, 23, said she has lost nearly 100 pounds. She also is making sure her 1-year-old, Andy, eats vegetables. During the recent Sunday brunch, he happily chomped on steamed broccoli.

Jose, 31, began walking two miles a day, three times a week, and has cut out nachos, soda, candy, hot dogs, burgers and fries. For lunch, he eats half a tuna sandwich on whole wheat bread, along with fruit. In the beginning, Jose said, he got hungry and moody. But he has been buoyed by his progress, losing more than 40 pounds and dropping 10 inches off his waistline.

Manuel Segura has lost 35 pounds along with his pot belly after cutting out his daily beer. And although he happily eats whatever Norma cooks, Manuel said, some of the children still struggle.

"Chicken today, chicken tomorrow," sighed 11-year-old Levi, who doesn't much like vegetables or his mother's decision to drop their visits to McDonald's for after-school burgers.

Jesus, 15, limits his lettuce. Levi stops her steamed broccoli at a floret or two. But Esther has made great strides. She said she now eats fresh produce she disliked before, including cactus and avocado, but is "still getting the hang of tomatoes." She has dropped two pant sizes.

The credit for her broader palate, Esther said, goes to lessons learned at home and in school. As a senior at West Adams Preparatory High School, she studied healthful cooking in a culinary arts class taught by Anna Redd, a chef.

"Before, I didn't eat vegetables, but now I do because I know how to chop them," Esther said, explaining that she has learned how to grip a knife with her thumb pressed on the base of the blade and to slice with a rocking motion.

In June, she and two West Adams classmates — Jose Landaverde and Maribel Sandoval — competed in a national healthful cooking contest in Washington, D.C., after winning L.A. Unified's competition this year. The contest required the students' dishes to meet prescribed nutritional standards, including no added sugar or salt.

The team's winning entree, "Tex Mex Corn Bread and Black Bean Mountain," featured spiced turkey and black beans over corn bread, topped with lettuce and salsa. Esther prepared the side dish of cucumber rounds and diced tomatoes drizzled with a balsamic vinaigrette. The dessert was cinnamon-spiced warm pears and raisins.

Esther and her team lost the national competition to Valley High School in Santa Ana, which won its second consecutive championship with a turkey and veggie sandwich, "Pita-Packs-a-Punch."

But, Esther said, she still feels like a winner: Beginning this fall, her team's dish will be served in L.A. Unified cafeterias.