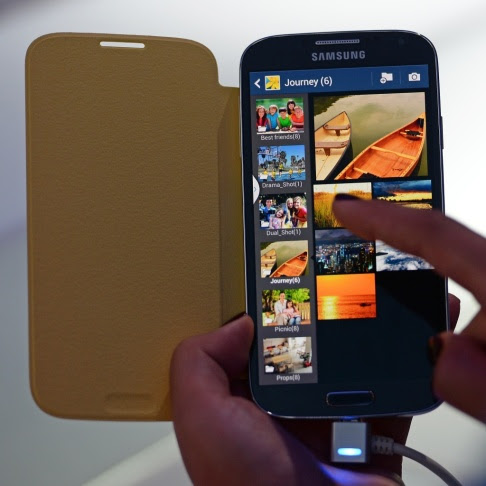 Greg Wood/AFP/Getty Images | The Samsung Galaxy S4 smartphone. Studies show that today's teens regularly use more than one screen at a time to stay connected.

July 30th, 2013, 6:30am  ::  A new report by The Wallace Foundation argues students are increasingly finding valuable arts education exposure via technology they access outside of the classroom - and teachers should use that to their advantage.

The extensive, 104-page report pushes for educators and policy makers to take advantage of what she calls "arts learning opportunities," many of which are happening outside of normal school hours as kids spend several hours a day using tablets, computers and other devices.

Rather than look down her nose at the increasing amount of time students are spending on their electronics, the report's author, Indiana University professor Kylie Peppler, said those habits are "full of promise for engaging young people in artistic activity."

She said this is especially critical now, after years of cuts to arts budgets at public schools across the country.

"Kids listen to music all day on an iPod, but they aren't producing it," Peppler said in an interview with Education Week. "Why is this happening? Maybe it's because the artists our kids love are Disney and Pixar filmmakers, but in school they are still using clay in art class—if an art class is even offered."

Do your students spend a lot of time using digital technology outside of the classroom? Does the technology in your classroom feel out of touch with what K-12 students are using in their own time?