Maybe the 3rd time will be the charm? LA ARTS HIGH SCHOOL GETS THE PRINCIPAL IT ALWAYS WANTED …if “it” = Beaudry

July 30, 2013   ::  The beleaguered Ramon C. Cortines School for the Visual and Performing Arts has a new principal. As Los Angeles Downtown News reports, the $232 million school will be helmed by Kim Bruno, the former principal of New York City’s LaGuardia High School of Music, Art and Performing Arts, which provided the inspiration for the musical Fame.

As the Downtown News’ Ryan Vaillancourt writes, this is “not the first time Bruno has been offered the job. She was originally courted in 2009, though after verbally committing, she cancelled plans to take the job, citing ‘professional reasons.’ She was targeted again in 2011, though she again declined the district’s offer.”

Bruno will be the Cortines School’s fifth principal since it opened in 2009. When he left two weeks ago*, the most recent principal, Norman Isaacs, told the LA Times, “No one has found a way to fund any of the programs that are ongoing… We have a $65-million theater and no money to run it.” 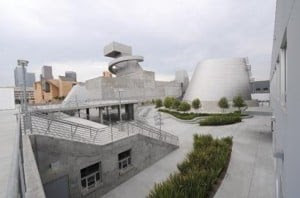 photo by Gary Leonard |Arts High School to Get New Principal...Again | The $232 million Ramon C. Cortines School of Visual and Performing Arts opened in 2009. It was designed by Wolf Prix

As the former principal of the lauded LaGuardia High School of Music, Art and Performing Arts in New York City, Bruno represents the kind of high-profile arts administrator that local officials have sought but failed to lure to the school since it opened in 2009.

The school has cycled through four principals in its first four years (not including an interim administrator who helmed the school for part of fall 2011).

This is also not the first time Bruno has been offered the job. She was originally courted in 2009, though after verbally committing, she cancelled plans to take the job, citing “professional reasons.” She was targeted again in 2011, though she again declined the district’s offer.

While it is uncertain what prompted Bruno finally to agree to take over the $232 million school, in a July 30 letter to LaGuardia High community members she likened the decision to a “new adventure.”

“It is with heavy heart that I am writing to you to announce that I will not be returning to LaGuardia in September,” Bruno wrote in the letter, a copy of which was obtained by Los Angeles Downtown News. “I have accepted a position with the Los Angeles school system and will be leaving NYC before the new school year begins. This was a very difficult decision for me to make considering the fact that LaGuardia has been my home for the last eleven years.”

Bruno replaces Norman Isaacs, who resigned after leading the school for two years. In an interview with the Los Angeles Times, Isaacs said he resigned because the district was not providing the resources he considered necessary to run a premier arts education institution.