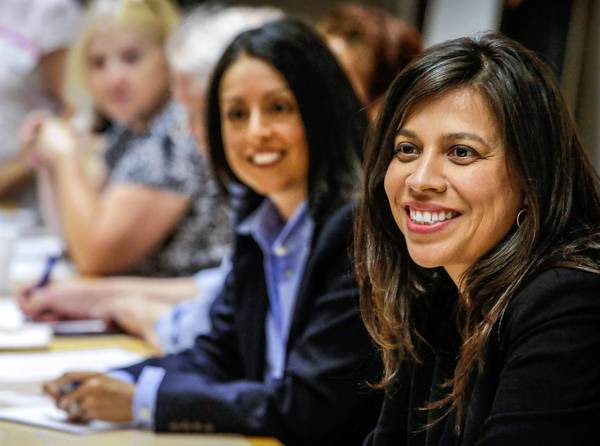 Los Angeles City Council candidate Nury Martinez said she was coming forward with allegations that a man sexually abused her as a child because her rival for the 6th District council seat, Cindy Montanez, last week sent out attack ads accusing Martinez of not doing enough to protect students during a series of teacher abuse scandals that unfolded last year. Above, Montanez, right, and Martinez at a forum last week in Sherman Oaks. (Ricardo DeAratanha / Los Angeles Times / July 11, 2013)

July 15, 2013, 10:28 p.m.  ::  Los Angeles City Council candidate and former school board member Nury Martinez on Monday said she was repeatedly sexually abused as a child, an allegation she's making public now to counter attack ads being circulated by her opponent in a July 23 special election to fill an open council seat.

Martinez, 40, said she's never publicly acknowledged that starting when she was "3 or 4," she was touched inappropriately over more than a year by a man in her Van Nuys neighborhood.

Feeling ashamed, Martinez said, she never told anyone about the encounters until she alerted her parents in her 20s. She also never reported the contact to police.

She said she was coming forward now because her rival for the 6th District council seat, Cindy Montanez, last week sent out attack ads accusing Martinez of not doing enough to protect students during a series of teacher abuse scandals that unfolded last year. Martinez's four-year term on the school board ended June 30.

One of the ads hitting mailboxes last week features a large photograph of Martinez with a quote from Lisa Carrahelios, identified as a former teacher at Verdugo Hills High School. The quote reads: "Nury Martinez and the LAUSD hid the existence and arrest of a teacher at Telfair Elementary School."

Text in the ad goes on to say, "Who would put our children at risk just to further her own political career?"

Martinez denied that the school board hid any abuse and called the Montanez ads "hurtful." She said she decided to go public because the ads "attack me on the record." Martinez never revealed her past to her fellow school board trustees or her former colleagues on the San Fernando City Council.

"She is accusing me of covering these things up,'' Martinez said. "That's where I draw the line."

Martinez said she didn't know of Telfair teacher Paul William Chapel's arrest in October 2011 on suspicion of child abuse until about four months later, when a Daily News reporter called to tell her a story was running the next day, Feb. 5, 2012. Chapel subsequently pleaded no contest to 13 molestation charges.

She spent the day at Telfair talking to and comforting parents, Martinez said. Then she pushed the district to disclose to parents any suspected wrongdoing by teachers as soon as possible. She said she also backed state legislation that would have allowed districts to get rid of teachers suspected of child abuse, violence or drug use in quicker fashion.

The bill, SB 1530, died in an Assembly education committee.

"These attack ads are an absolute lie," Martinez said. "Cindy Montanez is completely taking advantage of these victims for political purposes, and that's not OK."

Montanez defended the ads as factual. "She was on the school board when all of this happened and it was her responsibility to make sure that the district was acting properly to protect children," Montanez said.

As for Martinez's disclosure, Montanez said she is sympathetic: "My heart goes out to all victims of abuse."

Martinez and Montanez were the top two vote-getters in a six-way primary to replace former Councilman Tony Cardenas, now in Congress. The seat represents a swath of the East Valley, including the communities of Arleta, Pacoima and Van Nuys.

Montanez led Martinez by 19 percentage points in the May 21 primary election results and has raised far more money than her rival, city election records show.