Pearson & McGraw-Hill: AFTER 70 YEARS AS A NONPROFIT, GED TEST SWITCHING TO FOR-PROFIT VENTURE + a second opinion from the NY State Dept of Ed 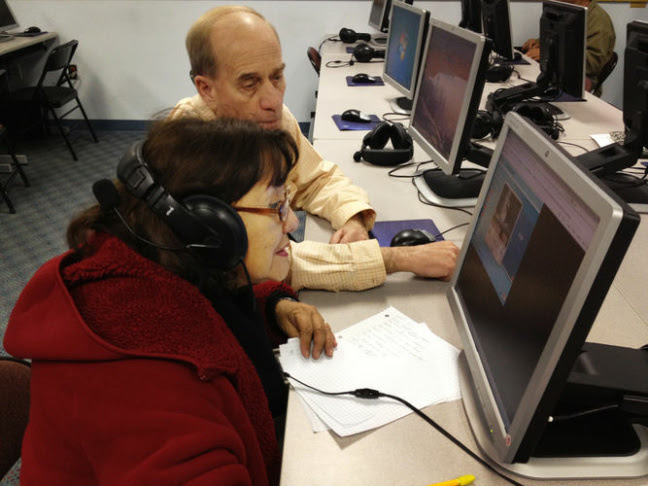 Diane Orson/WNPR | Donald Desmond teaches Abdesa Bustina to use a computer at the New Haven Adult and Continuing Education Center. The new GED will be offered only on computer.

July 24th, 2013, 6:00am  ::  For more than 70 years, a nonprofit organization — the  American Council on Education — has administered the GED tests to high school dropouts who want to go on to college or just get a job that requires a high school diploma.

But in January, the General Educational Development test is going for-profit, part of a trend of privatization in education.

The group has partnered with Pearson — considered the largest for-profit education business in the world — to form the new GED Testing Service, a for-profit company to run the test.

The Council’s leadership said the partnership came because they wanted to revamp the test because they felt the GED wasn’t adequately preparing test takers for the job market.

“For this program to remain relevant — to really have an impact on economic development and, a bottom line, to really give adult learners a chance at earning a sustainable living wage — we had to not just measure high school equivalency," said CT Turner, a spokesperson for the GED Testing Service. "We also needed to give feedback, and we need to measure people’s readiness for these college and career training programs that the majority have to go on to after a GED.”

Accomplishing that required a lot of money and expertise they didn’t have. Turner said the council approached nonprofit testing companies, but none was interested.

There have always been for-profit companies involved in educating kids: textbook publishers, for instance. But experts said the trend is growing.

“We’ve heard about outsourcing in the manufacturing world. Well, there’s a lot of outsourcing going on within education institutions, too," said Guilbert Hentschke, a professor at the Rossier School of Education at the University of Southern California. "It’s not new. It’s part of bigger things going on.”

Hentschke said 30 percent of the world’s education industry is run by private organizations. They can provide an injection of capital and some services that nonprofits don’t have. He points to his own university, which uses a paid service called Blackboard to manage class materials online.

“We would be dead trying to do our own learning management system without using Blackboard. And Blackboard’s for profit,” Hentschke said.

In 2012, London-based Pearson — a enormous company that also owns the Financial Times, Prentice Hall and half of Penguin Random House — reported a nearly $1 billion profit from its education business in North America alone.

Hentschke said it’s hard to know how much profit the GED can add to that bottom line.

“I’m sure they would like to have it make money. How much it will make is not totally clear to me. The natural market is there,” Hentschke said.

But it’s not a captive market. Many states have objected to the new test because the price has gone up, and they don’t have a lot of time to prepare. The new test will be administered in January. Students who have been working on the old one are scrambling to take it before the switch.

About a dozen states are weighing whether to switch to other tests.

In California, the GED is the only option right now: It’s written into state law.

Diane Hernandez, the state GED administrator, said the state is working on a bill that would allow for other tests.

“At least currently, there is no plan to step away from the GED test," said Hernandez. "We still plan to administer the GED in California. We’re just adding an option.”

New York State Education Department (SED) Commissioner John B. King, Jr. announced today that SED intends to execute a contract with CTB/McGraw-Hill to develop a new New York State High School Equivalency Diploma assessment to replace the General Educational Development (GED) test.  GEDTS, a new for-profit entity created by the American Council on Education and Pearson Incorporated, has announced plans that will double the cost of the exam in 2014. The Governor and Legislature must include an appropriation for the development of the new assessment in the State Budget. King said that, in the long run, CTB/McGraw-Hill’s new assessment will save the State money compared to the new pricing structure announced by Pearson.

"The members of the Board of Regents are concerned with two things: accessibility and rigor," New York State Board of Regents Chancellor Merryl H. Tisch said. "While the GED was run by a not-for-profit, the system worked fairly well.  But a Pearson GED monopoly would put our students at the mercy of Pearson’s pricing.  We can’t let price deny anyone the opportunity for success.  That’s why, rather than pay Pearson twice the current cost or limit the number of students who can take the exam, the Regents approved a competitive process to develop a new assessment."

King noted that New York’s shift to the Common Core Standards (adopted by New York State along with 44 other states) requires a change in the pathway to a New York State High School Equivalency (HSE) Diploma.

"We need a more rigorous exam that reflects the change in the standards," King said.  "A New York State equivalency test will help ensure access and rigor.  And we’re going to look at other pathways to high school equivalency.  The Regents’ goal is to ensure everyone has the opportunity to earn a high school diploma that reflects the skills and knowledge necessary to succeed in college and a career."

New York State law prohibits charging individuals to take HSE exams.  The State budget traditionally includes an appropriation to cover the cost of administering the tests.  The announcement by GEDTS that the new GED test, beginning in January 2014, will cost each candidate $120 effectively doubles the cost that New York State currently pays to administer the GED test. In response to the increased cost and changes in the administration and content of the GED test beginning in January 2014, the Board of Regents approved a competitive RFP to identify an appropriately rigorous assessment for a HSE Diploma at the most reasonable price.

CTB/McGraw-Hill’s new HSE assessment, Test Assessing Secondary Completion (TASC), will be a secure, reliable and valid assessment that meets the directions and specifications in the RFP and will be operational by January 2, 2014. The TASC will be aligned to New York’s P-12 Common Core Standards as quickly as possible.

The TASC will be administered on CTB/McGraw-Hill’s Online Assessment System (OAS). CBT/McGraw-Hill will use a phased-in approach for TASC computer-based testing over three years.  The cost per test over the three-year contract, including phased-in computer based testing, is $54 (not including reimbursement for test centers).

Final approval of the contract is subject to approval by the Office of the State Comptroller.

New York State Board of Regents

The State Education Department / The University of the State of New York / Albany, NY 12234