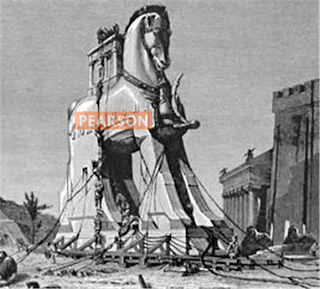 The measure passed unanimously in spite of opponents arguing that the money would be better spent on staff or to pilot both Windows and Apple systems and saying facility bond money should not be used for relatively short-lived teaching tools.

But, IMHO, they missed the key point -- the machines are Trojan Horses for textbook giant Pearson.

The LAUSD received 13 proposals and the top three called for different hardware -- Apple, Dell and HP -- but all three included an app to deliver the Pearson Common Core System of Courses along with other third-party educational apps.

I've seen nothing about the financial arrangement between Pearson and LAUSD.  I wonder what part, if any, of the $678 the schools are paying for the tablets will go to Pearson and what revenue, if any, Pearson will receive from adoption of their curriculum.

I do not mean to criticize Pearson's offerings -- I've not even seen them. (One must have a Pearson School account to see samples). This bundling of Pearson's material will give them a significant advantage, nipping competition in the bud.

Consider, for example, the Common Core math curriculum of the Khan Academy. Will a teacher or school be as likely to select that as the Pearson curriculum? I suspect not, and once they commit to one instruction/assessment platform, they will be locked in.

This situation reminds me of the introduction of the IBM PC in 1981. IBM's entering the PC market was a watershed event, legitimatizing the personal computer as a business and professional tool. IBM offered three operating systems, Microsoft PC-DOS, Digital Research CP/M and the UCSD P-System. Prior to the introduction of the PC, CP/M was the dominant operating system for business and professional applications, but it died almost over night because, although you could get it on an IBM PC, it cost more. Digital Research faded away and Microsoft became ... Microsoft.

After twenty years of serving up "pdf textbooks," we are starting to see innovation in Internet-based teaching material and systems -- will the new market be dominated by the same big-three textbook companies?