WHAT DID ARNE DUNCAN DO FOR CALIFORNIA SCHOOLS? 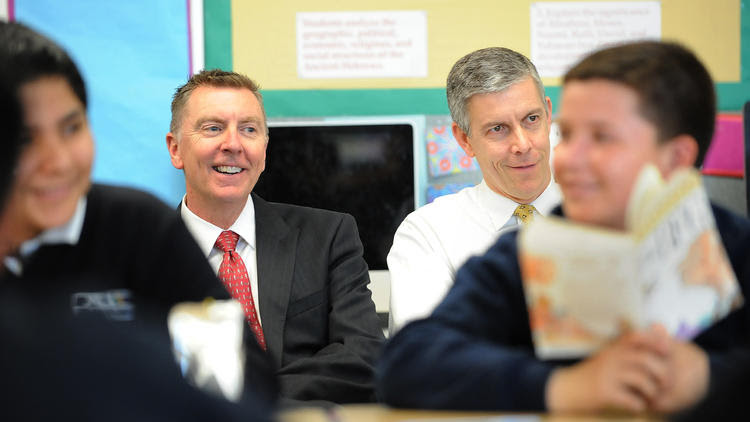 WHY ARE THESE MEN SMILING?: Former L.A. Unified schools Supt. John Deasy, left, and U.S. Secretary of Education Arne Duncan listen to a reading class at Dr. Julian Nava Learning Academy in Los Angeles in 2014. Duncan is stepping down from his post in December.  (Wally Skalij / Los Angeles Times)

Oct 2, 2015  6:59 PM  ::  Arne Duncan, who on Friday announced he will step down as U.S. Secretary of Education in December, had a sometimes stormy relationship with California, despite its status as a stronghold of support for Democrats and the Obama administration.

An early conflict was the state’s effort to secure grants through Duncan’s signature Race to the Top effort. States competed for the funds based on their willingness to pursue reforms favored by the U.S. Department of Education. The sticking point for California was that states had to agree to a teacher evaluation system based, in part, on measures such as student standardized test scores. In addition, state teachers unions had to sign on to a state’s application.

Then-Gov. Arnold Schwarzenegger, a moderate Republican, supported the requirements but could not secure agreement from teachers unions. The state’s application was downgraded as a result and other states got the money.

Other elements of Duncan’s push for major policy change included increasing the number of charter schools. Charters are independently managed and exempt from some rules that govern traditional public campuses. Duncan also promoted aggressive school “turnarounds,” which in many places meant replacing the entire staff at a school or closing a traditional school, with its union-represented workforce, and replacing it with a non-union charter school.

Duncan’s department had a huge influence in shaping education policy because it used grants to fill a vacuum left by Congress, whose members could not agree on education policies. 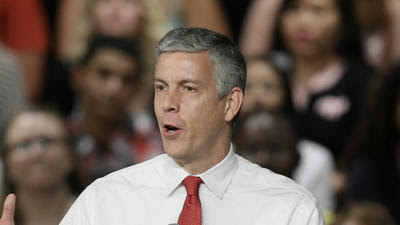 U.S. Secretary of Education Arne Duncan will step down in December >

California Gov. Jerry Brown came into office as an ally of teachers unions and a skeptic of many reforms he regarded as faddish and unproven. His administration resisted federal conditions for certain grants and refused to bend when Duncan wanted the state to continue using old state standardized tests until new ones were ready. In that resistance, Brown was joined by majorities in the state Legislature and by Supt. of Public Instruction Tom Torlakson, who also had political support from teachers unions.

California’s issues with Duncan were related not only to test scores and teacher evaluations, said Michael W. Kirst, president of the state Board of Education. Duncan wanted states to exert more authority over local school systems at a time when the state was trying to be less heavy-handed, to promote creative solutions at the local level, Kirst said.

Allies of Duncan, meanwhile, were concerned that local control in California would equate to tolerating poor academic achievement.

In contrast to California — and in exchange for federal money — many states quickly embraced Duncan’s reform agenda, which also had support from major philanthropies, including the Bill & Melinda Gates Foundation, the Walton Family Foundation and the Eli and Edythe Broad Foundation.

Unable to move state government in Sacramento, advocates in California sometimes turned to the courts instead. In 2014, they won a ruling that overturned traditional teacher job protections such as tenure rights and layoffs based on seniority. At the time, Duncan said the court’s decision represented an opportunity “to build a new framework for the teaching profession that protects students’ rights ... while providing teachers the support, respect and rewarding careers they deserve.”

The group that brought the case, Vergara vs. California, lauded Duncan on Friday.

“Secretary Duncan refused to turn a blind eye to broken systems that chronically fail the students in our country already struggling through poverty and violence outside of school,” said Manny Rivera, a spokesman for the advocacy group Students Matter. “Secretary Duncan spurred states to take action to elevate the quality and equity of America’s public schools.”

Brown is appealing the Vergara ruling, in conjunction with the state’s two largest teachers unions.

Praise for Duncan also came from the Broad Foundation, which has circulated a plan to enroll half the students from L.A. Unified in charters over the next eight years.

"Secretary Duncan has done a remarkable job,” said Paul Pastorek, co-executive director of the foundation. Duncan, he said, “was relentless in focusing on reducing the number of chronically low-achieving schools.”

On some matters, California political leaders proved to be welcome allies for Duncan and vice versa.

And California, in turn, proved fertile ground for the new learning goals called the Common Core, which were developed with substantial federal assistance. California also agreed to take part in new standardized tests that are based on the Common Core learning targets.

The tests, and even the learning goals themselves, have been increasingly debated. Texas and seven other states never approved, or backed away from, the Common Core. In New York, about 20% of parents refused to let their children take the new tests, which could compromise their statistical validity.

"Some of his policies were not a good fit for California and some were,” Kirst said.

In Los Angeles, Duncan was cautiously allied with opponents of the teachers union on policy. He repeatedly praised former Supt. John Deasy as one of the nation’s top superintendents. But Duncan also tried to avoid picking fights -- he also praised current Supt. Ramon C. Cortines, who has a better rapport with employee unions.

Duncan also gave L.A. Unified valuable relief from the outdated federal No Child Left Behind Law. That law imposed penalties on districts that could not reach unrealistic achievement targets. The administration only relaxed these punitive measures when states agreed to meet certain federal conditions. Duncan could not agree on terms with California, and he began to work instead with a group of California districts that included L.A. Unified. Duncan ultimately granted these districts a waiver from No Child Left Behind, which returned control of millions of dollars annually to these schools systems.

Both for L.A. Unified and the nation as a whole, Duncan was an enormously positive force, said Deasy, who called Duncan the "most consequential secretary of education ever."

"He had a huge imprint on the education landscape, especially for youth in poverty," Deasy said. "He was unflinching on high expectations for all."

"No better person to follow and lead the department," Deasy said. "Between his own personal story and leadership experiences, the department and the youth of the country are in very, very good hands."

King previously was commissioner of New York's state education department and also co-founded a charter school. His time in New York was marked by controversy over the pace at which he moved the state to the Common Core. Critics also faulted him for immediately linking teacher evaluations to tests based on the new learning standards.

"New York wanted to be first to show that high-stakes testing was the policy of the country, and John King wanted to make sure that New York was first," said Randi Weingarten, president of the American Federation of Teachers. "It had a terrible polarizing effect.”

She said she also worried that King would continue along Duncan’s ideological path, including his preference for spurring the growth of charters, which she said has become a dangerous “magic bullet” strategy in Los Angeles and elsewhere.

Alex Caputo-Pearl, leader of L.A.'s teachers union, had a negative appraisal of Duncan, including the secretary's support for charter schools. Caputo-Pearl sides with those who say that many charters try to exclude students who are more difficult and expensive to educate.

"He expanded the number of schools that don’t play by the same rules in terms of serving students," Caputo-Pearl said. "He also increased the amount of time spent on testing rather than learning. And he contributed to the philosophy that you should run schools like a business, and the idea that test scores are the bottom line."

In recent years, as a backlash developed against some of Duncan’s favored reform strategies, he eased his insistence on some of them. He began speaking more about gauging student achievement through measures other than test scores or, at least, through measures in addition to test scores.

“His position really evolved over time,” said Dale Russakoff, who has written a book on how these favored reforms were pursued in the Newark, N.J., school system. “He came in with this idea of Race to the Top, that had very prescriptive changes that every state would make. But he moderated his viewpoint. It says something about the whole reform movement: There was an attitude of, ‘We know what works’ that has evolved to incorporating more of the perspective of teachers, parents and community groups.”