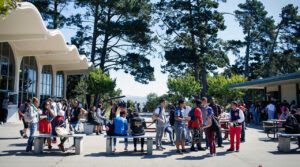 Oct 1, 2015 | Sexual health education will become mandatory on Jan. 1, 2016 for California public school students in grades 7 through 12 under a bill signed into law by Gov. Jerry Brown on Thursday.

The new law seeks to remedy the uneven instruction in sexual health in public schools in the state, as documented in a study by researchers at UC San Francisco and in a lawsuit against the Clovis Unified School District brought by two parents and several advocacy groups that alleged inaccurate and biased information about sexual health was being taught. The parents alleged that a textbook on HIV prevention did not mention condoms and a video on sexual health featured a man on his wedding night comparing a woman to a dirty shoe because she was not a virgin.

“The previous law was important, but there were districts that were out of compliance with it,” said Phyllida Burlingame of the ACLU of Northern California. “This takes us to a new level.”

According to Phyllida Burlingame, reproductive justice policy director of the American Civil Liberties Union of Northern California, more than 90 percent of high schools in California already offer some form of sexual health education.

But because instruction was not mandated, the districts were “picking and choosing” what they wanted to teach, she said. In some cases, lesbian, gay, bisexual and transgender students have been “made to feel invisible – or worse, stigmatized – in health classes,” Burlingame said.

“The previous law was important, but there were districts that were out of compliance with it,” Burlingame said. “This takes us to a new level.”

Among the new areas required, the curriculum will include information about “sexual harassment, sexual assault, adolescent relationship abuse, intimate partner violence, and sex trafficking.” Schools must provide “comprehensive, accurate and unbiased” information on sexual health and HIV prevention and provide students with “the knowledge and skills they need to develop healthy attitudes concerning adolescent growth and development, body image, gender, sexual orientation, relationships, marriage, and family,” according to the text of the law.

In addition, the governor signed legislation on Thursday requiring curriculum on affirmative consent, known as “yes means yes,” in school districts where high school students must take a health class before graduation, such as Los Angeles Unified and Elk Grove Unified. That law, known as Senate Bill 695, was authored by Sen. Kevin de León, D-Los Angeles.

Edward Trimis, principal of Verdugo Hills High School in the Los Angeles Unified district, said in a statement that he welcomed the curriculum. “We can and will make it a regular part of our health curriculum to ensure all students are getting the same message, that not only does ‘no mean no,’ but ‘yes’ must be affirmed to mean a clear ‘yes,'” Trimis said. “It’s the right thing to do and the right thing to teach.”