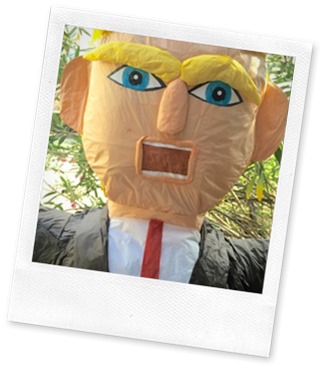 By Allie Grasgreen Ciaramella in Politco’s Morning Ed  | by email

10/19/2015 10:04 AM EDT    ED DEPARTMENT IN TRUMP'S SIGHTS: Donald Trump might want to eliminate the Education Department. Chris Wallace challenged the leading GOP candidate on "Fox News Sunday," on whether he would "blow a hole in the deficit." Trump first said he would cut waste and abuse. When Wallace asked if he would cut departments, Trump said he'd consider the Education Department.

<Donald Trump Piñata, courtesy of someone who photographs such things.

"I believe Common Core is a very bad thing. I believe that we should be ... educating our children from Iowa, from New Hampshire, from South Carolina, from California, from New York. I think that it should be local education."

Trump did not mention that whether to use Common Core standards is up to states.

"If you look at a Jeb Bush and some of these others, they want them to be educated by - by Washington, D.C. bureaucrats," Trump said. Regarding the department, Trump told the South Carolina Tea Party Convention in January that, "You could cut that way, way, way down."

- Trump may have more to say soon. He plans to unveil "little policy segments" that will address his budget-cutting plans in three weeks: http://fxn.ws/1LYniAZ.