IS ELI BROAD’S HOSTILE TAKEOVER OF LAUSD COMING FROM THE OUTSIDE …OR IN? +smf’s 2¢ +more!

October 12, 2015  ::  LAUSD was making a clean break from a past that included the iPad scandal (still under federal  investigation) and the “don’t let the door hit you on the way out” resignation of John Deasy. Board President Steve Zimmer launched LAUSD’s community engagement campaign for the superintendent search last week.

“The public will be involved in helping to shape the conversation...Your voice as a stakeholder is very important to the Board of Education,” Zimmer wrote. This is a welcome change, considering Deasy was Eli Broad’s handpicked superintendent for the public schools, and is now his private superintendent at the unaccredited Broad Academy.

Input will be gathered at community outreach sessions. The LAUSD community is accustomed to such meetings, facilitated by a team of experts who have built trusting relationships with parents, faculty and neighbors, in sometimes difficult circumstances. We know them by name: Lorena, Fortunato, Holly, Judy and others.

However, rather than a Human or Community Relations facilitator, the person at the center of the outreach for the supe search is a lobbyist who has spent her career advancing an agenda closely aligned with Eli Broad’s.

Biography of a Zealot
Gibbons’ entire resume reads like the biography of a Broad zealot. To familiarize yourself with the organizations in Broad’s favor (or who you should not let bring free cookies into the teachers lounge), read on.

Let's start at the beginning.

Gibbons is an alumni of Teach For America (TFA), or Temps for America, as critics call it. TFA places elite college graduates in two-year teaching internships after five weeks of training. The departure of most of them after two years, when they move onto careers in other fields--sometimes to positions shaping public policy--destabilizes schools and undermines the teaching profession. Education policy scholar Dr. Julian Vasquez Heilig of Cal State Sacramento has researched TFA extensively. He recently called for a policy debate about TFA when public outcries led two Southern California school districts to reject contracts with the organization. TFA is a foundational element of Broad’s plan.

After her two years was up, Gibbons spent a few months teaching at Harlem Success Academy, one of the schools in Eva Moskowitz’s New York charter chain. The chain is so closely aligned with Eli Broad's goals that he donated $5 million to help it expand from 20 to 100 schools. Sound familiar? Diane Ravitch's blog has the most complete log of the numerous published reports of the shenanigans of Success Academy charters over the years (draconian discipline policies, astonishingly high suspension rates, which Moscowitz defended as a way to promote “order and civility in the classroom,” closing the school for one day a year to have families lobby in support of charters).

After a semester at Harlem Success Academy, Gibbons worked for Educators for Excellence (E4E), a Gates-funded organization whose mission aligns perfectly with Broad’s plan. According to the education blog, Edushyster, E4E members sign a pledge to support school choice, the statistically invalid value-added measurements in teacher evaluations, and merit pay among other core values. These are major tenets of the Broad Academy.

Gibbons’ close ties to Broad’s agenda aren’t just guilt-by-association either. She claims credit for StudentsFirst’s lobbying campaign for California Senate Bill 441. Introduced by then Senator Ron Calderon, before he was indicted in a separate pay-for-play scheme, the bill was based on rightwing ALEC model legislation. It would have increased the frequency of teacher evaluations and eliminated teacher input into the process. Here is a short promo video starring Gibbons pushing for Calderon’s bill in the Capitol and urging the public to contact their legislators to vote ‘yes’. Disgraced Mayor Kevin Johnson (Rhee's husband) is represented, too.

It was defeated, but Gibbons’ actions in the video are enough to scare anyone who is rooting for LAUSD against Broad’s hostile takeover. Now she represents LAUSD in those same halls of the State Capitol?

Now at LAUSD
Since January, 2015, Gibbons has been an external affairs and legislative liaison in LAUSD’s Office of Government Relations, according to her LinkedIn profile. That’s before the new board convened; certainly before new board member Scott Schmerelson vowed not to let Eli Broad bully the school board, before Steve Zimmer was board president, and before he said that Broad’s plan was a “gross perversion” of charters in an NBC television interview.

So has Gibbons turned over a new leaf since joining the largest school district in the country with a democratically elected school board? Not likely. She sent out an “invitation only” announcement for a “Community Briefing and Superintendent Search Meeting” to a select few. Who received this? Why is the rest of the community left out?

She also appears to be continuing to promote the corporate privatization agenda that Broad pursues even while the school board publicly reassures us that they are fighting against it.

Her twitter feed includes a lament to the nation's chief antagonist of public school parents and teachers:
“@arneduncan - You’ve been a true champion for kids and a bold systems innovator. You’re going to be sorely missed.”

And shouts out to her charter friends:
“...these KIPPsters and educators totally deserve it. Congrats! @KIPPLASchools”.

Can parents and community members trust that Gibbons will somehow fairly facilitate the outreach process for superintendent when she has built a resume lobbying a very specific agenda for schools?

Facilitating the Parent Advisory Committee for LAUSD, Gibbons has shown some responsiveness to parents, according to minutes. She “acknowledged the frustrations in the room and stated a willingness from her department to help make this process more meaningful.” However, when the LA School Board voted to approve the Local Control Accountability Plan (LCAP) based on the Parent Committee's input, six months after Gibbons arrived, a parent from new board member George McKenna’s districtcried foul. She testified with complaints that parents had not been meaningfully involved.

There is also evidence that Gibbons might have collaborated with outside groups driving a specific agenda. One of the LCAP sessions was even hosted by the United Way, a civic group now pushing Broad’s charter plan and demanding a central role in  the superintendent selection process. 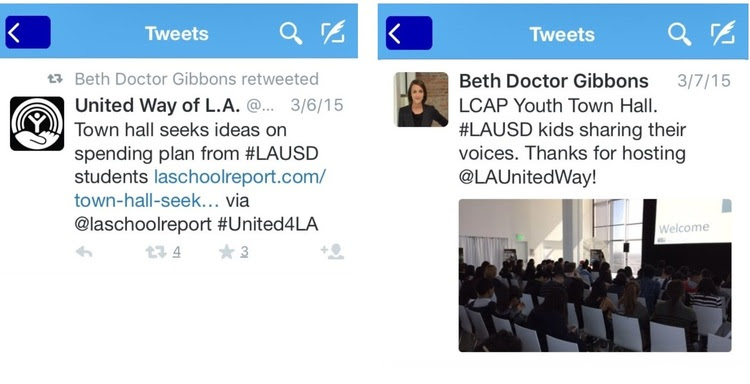 They assert that only a committee outside of LAUSD will have legitimacy. If they convene such a committee to drive their reform agenda, Gibbons might make a good facilitator--for them.

A New Beginning
Since the new Board convened in July, 2015, most of its members have taken seriously their responsibility to repair the damage to the district--including the public perception--by the scandalous past. They have supported the Interim Superintendent Ramon Cortines, who has put a district back together that appears to have been dismantled from the inside. Now, the threats of “disruptive innovation” are coming from the outside.

At least we thought they were.

The School District will not win public confidence in the next superintendent by turning over the important community engagement process to a cheerleader for the very agenda they claim to be fighting against. Why is a lobbyist responsible for parent outreach in the first place?

The District needs to take immediate, definitive action to ensure an honest and transparent process that restores the trust of community members. That means Gibbons should not even be allowed in the room.

Then, if they’re serious about defending the district against Eli Broad’s attack, they can ask themselves what in the world anyone with Gibbons’ resume is doing representing LAUSD in any room at all.

One would hope the powers that be search further/deeper/broader for leadership – beyond  Ms. Gibbons!

Eli Broad already announced his intention to privatize the schools of half the children in the Los Angeles public schools. He will gather $490 million from his billionaire friends to open 260 new charters. Some of these will presumably be housed in empty public schools.

The Broad coalition of Broad-funded organizations has already demanded a role in vetting the new superintendent.

The elected school board has made clear that it wants to hear from many communities, not just the Broad coalition.

But who do you think is in charge of community outreach for the school board? A certified insider in the corporate reform movement!

As Karen Wolfe, a parent activist, details here, Beth Doctor Gibbons has a sparkling "reformster" resume. She was a lobbyist for Michelle Rhee's anti-teacher, anti-union StudentsFirst for three years; she is an alumna of TFA; she taught in Eva Moskowitz's Success Academy chain; she worked for Educators for Excellence (E4E), the Gates-funded group that opposes due process rights for teachers. What a resume!

"Now at LAUSD
Since January, 2015, Gibbons has been an external affairs and legislative liaison in LAUSD’s Office of Government Relations, according to her LinkedIn profile. That’s before the new board convened; certainly before new board member Scott Schmerelson vowed not to let Eli Broad bully the school board, before Steve Zimmer was board president, and before he said that Broad’s plan was a “gross perversion” of charters in an NBC television interview."

This is the person who will lead community discussions of Eli Broad's hostile takeover and privatization of LA schools. What a clever man he is!

Will the board go along with Eli's silent coup or will they choose someone to represent the public interest?

Steve Zimmer? Time to stand up and be counted.