Why are we not surprised?: CHARTER ADVOCATES RELEASE POLL THAT SHOWS SUPPORT FOR L.A. EXPANSION! 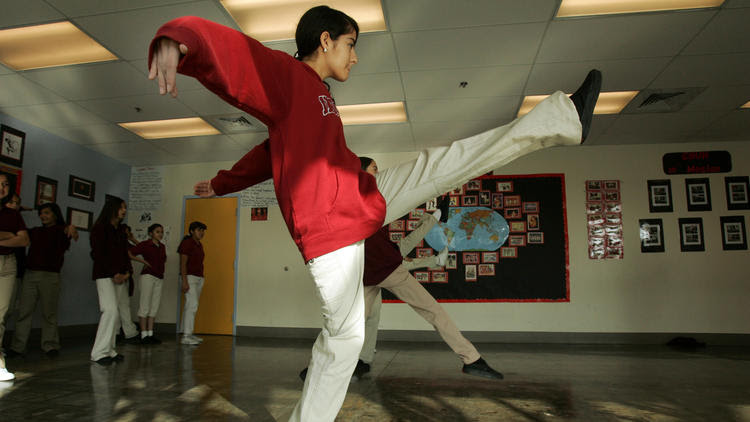 12 Oct 2015  ::  The public relations battle over a $490-million privately funded proposal to expand charter schools in Los Angeles is officially in full swing.

California’s charter schools association and the Eli and Edythe Broad Foundation on Monday will release the results of a poll commissioned by the pair of organizations that shows about 70% of registered voters surveyed support an expansion of charters.

These are publicly funded but privately managed schools. Most are nonunion.

Release of the poll comes a day before a scheduled protest by the teachers union of the charter expansion plan spearheaded by the Broad Foundation. United Teachers Los Angeles has been a vocal opponent of the proposal.

In a city where charter schools have flourished, often pulling students and funding away from traditional public schools, the stakes are high. L.A. Unified leaders and charter advocates have been at odds since a copy of the proposal was obtained and published by The Times.

The Great Public Schools Now proposal calls for 260 new charters in eight years, an effort that would more than double the number of students enrolled in these schools.

Gregory McGinity, co-executive director of the Broad Foundation, said the proposal is merely a draft that could develop with input from the community. He said that’s why the foundation commissioned the poll of 1,150 registered voters who live within L.A. Unified’s boundaries. Most did not have children in the public schools.

Board of Education President Steve Zimmer said there is no dispute that people support charters, but he said the expansion plan is focused on the growth of those schools at the expense of children served by L.A. Unified. Zimmer said he has not been approached to discuss ideas for expanding charters while also investing in traditional public schools.

“I am someone who will work with everyone, who is interested in transforming public education outcomes for all children,” Zimmer said. “I don’t think that window for substantive conversation, if it’s about all and not just some kids, has closed.”

Many questions focused on charter school expansion. Voters were given positions from opponents and supporters of charter schools and asked if any of those arguments made them more or less likely to support expansion.

The poll also showed that voters favor traditional neighborhood schools and charters about the same, and that 88% of those surveyed also support investing in existing public schools to create more successful programs like magnets.

In recent weeks, L.A. Unified and charter advocates brandished different state testing results to show areas of success with students. Charter supporters pointed to data that have those schools outperforming traditional public campuses, while the district offered its own analysis that highlighted magnet programs as higher performers than charters.

McGinity said one focus of the poll was to determine whether the plan should be expanded to potentially include partnerships with L.A. Unified to build on successful programs.

“Maybe there is a way that we can replicate high-quality magnets and other high-quality schools that are doing a great job serving large numbers of kids in poverty,” he said.

A Los Angeles Times poll released in April found nearly half of voters surveyed believed that charter schools offered a higher-quality education than traditional public campuses. Still, a majority of voters thought the state should invest in improving existing schools instead of spending additional money to create more charters.

United Teachers Los Angeles President Alex Caputo-Pearl said instead of focusing on developing new charter schools, the Broad Foundation should invest in programs that would help students at all public schools.

“The effort to provide early education to all students within the L.A. boundaries, the effort to have wrap-around social services at as many schools as we can, the effort to have lots of books in libraries -- those efforts can be very substantially moved forward by having a half billion dollars,” said Caputo-Pearl.