Oct 7, 2015 |A new report comparing school systems in 50 cities nationwide – including nine in California – found that inequities persist, but some cities provide better overall opportunities for all students than others. 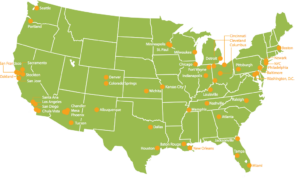 The report, called “Measuring Up: Educational Improvement and Opportunity in 50 Cities,” was released Wednesday by the University of Washington’s Center on Reinventing Public Education. It looked at test scores, suspension and graduation rates and the percentages of students taking ACT/SAT and advanced math classes from 2011-2013, before California schools began administering Smarter Balanced tests based on more recently implemented Common Core standards.

“It’s kind of a problem-framing report,” said lead author Michael DeArmond. “Nobody looks good on everything. There’s no one sure path to success. The enormity of the challenges we face is at least reason for cities to double down on urgency and get away from sector-to-sector horse races to discuss, ‘How can we use the resources we do have in the city to try to do good things for kids?”

• Academic performance didn’t improve in most cities, with some proficiency gains in cities including Los Angeles, while large numbers of schools were “stuck in the bottom 5 percent of schools in their state” in some cities, including Oakland.

• Low-income students and students of color had limited access to high-performing schools, with Hispanic students in Los Angeles nearly seven times as likely as white students to be in an elementary or middle school that scored low in math.

• White students were more likely than black and Hispanic students to be enrolled in a top-scoring elementary or middle school.  In California the disparities were smallest in Santa Anta, Chula Vista, Sacramento and Stockton, and largest in Los Angeles, San Francisco, Oakland and San Diego.

• Less than 19 percent of all students in the nine California cities took advanced math classes in 2011-12, with Oakland enrolling the largest percentage overall, but also having the biggest gap between white and black students.

“I hope this will serve as a catalyst for city leaders to take a look at where they might be falling short and identify other cities they might learn from,” DeArmond said.