THE ‘REANIMATION’ OF JOHN DEASY, WILL THE NEXT SUPERINTENDENT BE A NATIVE? Includes UTLA video + AALA Update article “It’s California’s Turn!”

October 2, 2015 2:39 pm  ::  UTLA President Alex Caputo-Pearl released a 12-minute video on YouTube today in which he asks members to vote for a dues increase.

According to Caputo-Pearl, the union has not updated its dues structure since its inception 45 years ago, which now “literally threatens the future of UTLA.”

The video also includes a humorous reference to former LA Unified Superintendent John Deasy, who resigned a year ago. Deasy and Caputo-Pearl locked horns frequently, but now Deasy is working at the Broad Center, and its affiliated Broad Foundation is currently developing a plan to expand charter schools in the district to include half of all students.

Caputo-Pearl claims in the video that UTLA has confirmed that Deasy is, in fact, the architect of the plan, which was outlined in a 48-page draft report. Caputo-Pearl calls this the “reanimation” of Deasy. Reanimation? Is that a reference to the 80s cult classic film, “Re-Animator“?

The film is about a doctor who discovers how to bring corpses back from the dead. Using the film as a metaphor, it certainly shows the ironic position Caputo-Pearl finds himself in. He helped chase Deasy out of the district, which he hailed as a “victory” for UTLA. But now Deasy is arguably in a much more powerful position as he allegedly orchestrates a plan that would wipe out half of the jobs of UTLA members.

As the trailer for the film says, “Once you wake up the dead, you’ve got a real mess on your hands.”

Check out the full UTLA video below.

A Call for a Californian

LA Unified is currently in a hot search for a new superintendent and is already receiving applications and putting together a list of potential candidates. As the district contemplates what kind of superintendent it wants, the union that represents its principals, the Associated Administrators of Los Angeles (AALA), has an interesting request: make sure he or she is from California.

The opening of AALA’s latest newsletter reads: “The time has come for the District’s next superintendent to be from California! The previous superintendents from Florida, Colorado, Virginia, and Prince George’s County [MD] have produced a mixed-bag of results for the District at best! Besides, the proof is in the pudding with Superintendent Cortines. This is his third tour of duty with the Los Angeles Unified School District and, by all accounts and Google searches, he is a Californian!” (follows)

Just simply finding any qualified candidate, let alone one with as specific a credential as where they grew up, has proven to be a challenge for LAUSD in the past. As one district staffer told LA School Report a year ago when Deasy stepped down, “The truth is there aren’t a lot of superintendents out there who have run any government agency of this size. That leaves LAUSD with a very short list of candidates with actual experience.”

Then there is Kate Walsh, president of the National Council on Teacher Quality, who said back then: “I don’t know a single person on earth who would want that terrible job. It won’t be a change agent. It will be a status quo candidate who will make life pleasant for himself by enjoying all the wrapping of the superintendency and being smart enough not to try and change a thing.”

Certainly there must be at least one Californian out there fitting that criteria. 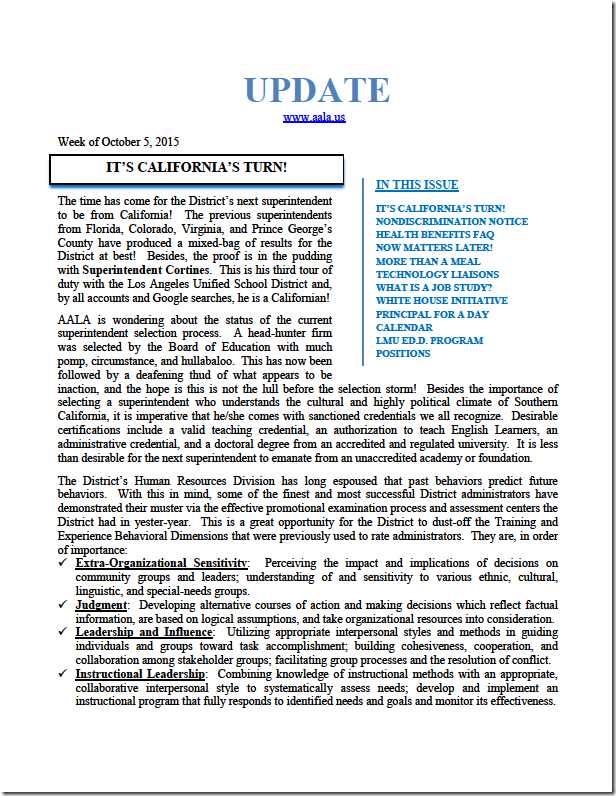 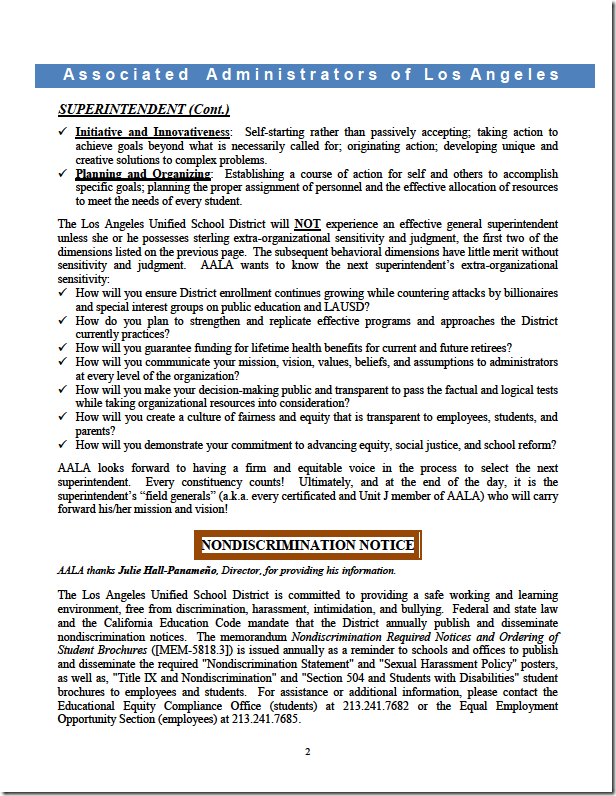