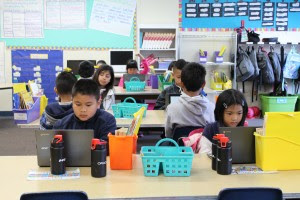 Oct 2, 2015 | Although parents were originally supposed to receive their children’s scores on new Smarter Balanced tests over the summer, most school districts received reports to send to parents much later than anticipated.

Some educators say they are frustrated that parents had not received the reports earlier so they could discuss them at back-to-school and other beginning of the year events.

Pam Slater, spokeswoman for the California Department of Education, said the delays were due in part to a desire to ship all the reports at once, instead of piecemeal.

“Additionally, the deployment of the new and complex reporting system required quality control measures be added that resulted in the delay of the reports,” she said. On Oct. 2, Slater said all reports had been shipped to districts by that day.

Districts had received the scores electronically earlier, but not the more detailed printed reports which explain to parents what the scores mean. The reports were prepared and mailed to districts by the Education Testing Service, which administered the new Common Core-aligned tests. Once they receive them, districts have the responsibility to mail them to parents.

Districts must send the reports to parents within 20 days of receiving them and were initially supposed to send them no “later than the first 20 working days” of the next school year, according to the state’s education code.

The delay frustrated some district officials because they say it has hampered their ability to discuss the scores with parents. Some, such as Garden Grove in Orange County – which just received its reports last week – are preparing their own letters to parents explaining the results and are planning special parent meetings to discuss the scores.

“The report the state has provided for parents is not the easiest to comprehend,” said Garden Grove Superintendent Gabriela Mafi.

Statewide, average scores were lower than parents were used to seeing on the previous paper and pencil California Standards Tests in math and English language arts, which schools last administered for about 15 years until the spring of 2013. Thirty-three percent of students in grades 3-8 and 11 met or exceeded standards in math, as defined by the Smarter Balanced consortium that drew up the tests, and 44 percent met or exceeded English language arts standards on the new tests.

The Smarter Balanced tests – which are part of the California Assessment of Student Performance and Progress, or CAASPP – were administered online and assessed critical thinking and problem-solving skills, and required more writing than previous tests.

The newness of the tests, and results presented in unfamiliar formats, has prompted some schools in the Aspire charter school network to make presentations to parents about how to how to interpret the scores, said Elise Darwish, Aspire’s chief academic officer.

Aspire’s letter to parents stresses that the tests assessed students on new, more rigorous academic standards — and that the scores reflected those higher standards.

“If your student receives low scores, it does not mean that students have fallen behind, learned less or will be held back from moving to the next grade,” the letter from Aspire Bay Area Superintendent Kimi Kean states. “It means that we raised expectations for our scholars to ensure that (they) are more prepared for college.”

Like those in Aspire, average student scores in  Visalia Unified in the Central Valley district were lower than statewide averages.   The district received its student reports earlier this week and plans to send them out by Monday, said Superintendent Craig Wheaton.

It also plans to train its teachers to discuss the results during parent-teacher conferences in November.

“I was surprised they’ve taken so long to get here,” Wheaton said last month. “I’m sure that teachers will need to be prepared to give information and answer questions, when you start talking about, ‘How’s my child doing?’ I can just imagine some parents saying, ‘What’s this? My child’s not at grade level?’ We’re going to have to educate our educators about this.”

The reports include overall scores in English language arts/literacy and math that fall into four achievement levels: standard exceeded, standard met, standard nearly met or standard not met. They also show achievement levels in subcategories such as reading, writing, listening and research/inquiry in English, and communicating reasoning, concepts and procedures, and problem solving and modeling/data analysis in math.

But there are only three achievement levels listed for the subcategories and they don’t include any scores or show how students compared to others statewide. These levels are above standard, at or near standard, or below standard.

Mafi said the “at or near standard” level is so broad that it’s difficult to interpret.

“As a parent, it’s very challenging,” she said. “We’re doing a cover letter to our parents to explain that this is a new test. We don’t know a lot about it yet. In the interim, we’re still doing classroom assessments and district-wide assessments.”

However, these documents merely explain the contents of the report, without going into details about the tests themselves. To give parents a better idea of the kinds of questions their children were asked, the state Department of Education teamed up with the California PTA to create parent guides in English that explain elementary, middle and high school results.

The GreatSchools organization has also created an interactive online tool called the GreatKids California State Test Guide for Parents at CaliforniaTestGuide.org that explains the Common Core standards assessed on the tests for grades 3-8, available in English or Spanish. Bill Jackson, chief executive officer for GreatSchools, said his organization created guides for every state that is administering Common Core-aligned tests to help parents understand what the scores mean and how they can help their children improve.

“You can see the kinds of questions the test used to assess your kid,” he said, adding that parents can help build their children’s skills and knowledge in everyday interactions with them.

For example, if children didn’t meet 8th grade reading standards, the guide advises parents to have discussions with them about books, films or magazines and to work on building their academic vocabularies. It also recommends talking about students’ skills with teachers to identify strengths and weaknesses and to ask about how to help.

But in some districts, such as Fresno Unified, parents may not receive their reports in time to discuss them at parent teacher conferences. The first quarter ends Oct. 9 and elementary parent conferences will take place from Oct. 12-23.

Fresno Unified spokesman Jedidiah Chernabaeff  said the district plans to send the reports out sometime this month, but he could not confirm whether parents would receive them before the conferences. Students in the district scored well below the state average, with fewer than 30 percent meeting or exceeding goals in math and English language arts.

Superintendent Michael Hanson said last month that the state’s delay in sending out the reports hindered the district’s ability to effectively explain scores to parents before their children started the new school year.

“The primary use should be so we can help a student understand where they are and to help a teacher understand that,” Hanson said, after the state released district and school results Sept. 9. “For us not to be able to communicate that – that’s a problem.”

I can understand the frustration.  Part of the Smarter Balanced/CAASPP promise was that these scores would be timely and usable by teachers+schools  during the school year …not after-the-fact as the STAR test scores were.

“Districts had received the scores electronically earlier, but not the more detailed printed reports which explain to parents what the scores mean. The reports were prepared and mailed to districts by the Education Testing Service, which administered the new Common Core-aligned tests. Once they receive them, districts have the responsibility to mail them to parents.”  There are multiple levels of muddle/middlemen inserted here – including  ETS, Aspire Charter Schools and GreatSchools.org - that add delay and cost and confusion to the process. The intent to mail results all at once is laudible but totally unimportant. CDE should mail to parents+schools direct when the scores are available.

Finally, this year’s scores – the article itself says it was “a practice test” - were benchmark scores – used to calibrate the tests and detect anomalies, outliers and testing+process error. Because of this the actual tests themselves were substantially different from the real tests which roll out next year.

Hopefully with results delivered  in a timely manner.