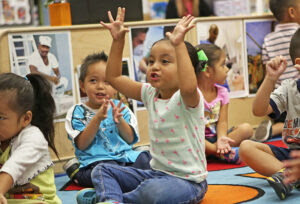 FERMIN LEAL/EDSOURCE TODAY | Preschool students at Land School in Westminster follow a teacher's directions during a lesson as part of a state preschool program.

Oct 9, 2015 | To the disappointment of many child care advocates, Gov. Jerry Brown vetoed a bill Friday that would have set a timetable for providing state subsidized preschool for all low-income 4-year-olds.

Assembly Bill 47, authored by Assemblyman Kevin McCarty, D-Sacramento, would have set a target of June 2018 to provide access to state subsidized preschool to all low-income 4-year-olds who are not already enrolled in transitional kindergarten or state preschool. Whether that timetable would be met would have been contingent “upon the appropriation of sufficient funding in the annual Budget Act for this purpose.”

In his veto message, Brown said that the state already had indicated its intent in last year’s budget bill (SB 858) to “make preschool and other full day, full year early education and care opportunities available to all low-income children.” He said expanding state preschool “should be considered in the budget process, as it is every year.”

A bill that he said “sets an arbitrary deadline, contingent on a sufficient appropriation, is unnecessary.”

Early education advocates, however, wanted to firm up that commitment to provide more preschool spaces and lobbied heavily to accomplish that goal. While the bill did not have any funding attached, the bill would have given lawmakers a deadline, instead of a soft goal of eventually providing the slots.

Deborah Kong, president of Early Edge, said she was disappointed about the veto, saying it was a “missed opportunity.”

“We’re glad to see that the governor recognizes the promise made last year and look forward to engaging with his administration in the coming budget process,” Kong said in a statement. “There remains a significant unmet need for preschool in California, with tens of thousands of low-income children who do not have access to preschool. To them and their families, this is very necessary.”

McCarty, too, said he plans to again focus on expanding preschool access in the next budget.

“I’m disappointed in the Governor’s veto of  AB 47, the Preschool for All Act of 2015,” McCarty said in a statement. “Quality early childhood education has been proven to help close the achievement gap, fight poverty, and prevent kids from entering the juvenile justice system.”

Between 32,000 and 35,000 low-income 4-year-olds lack access to state preschool, transitional kindergarten or federal Head Start programs. The cost estimates for the bill varied greatly, depending on how many children would have been placed in full-day vs. half-day programs, ranging from $147 million and $240 million.

Since the Legislature passed the bill Sept. 11, early education advocates, led by Early Edge, have heavily pushed for Brown to sign the bill. More than 40 organizations lent their support to the bill. McCarty held a rally at a Sacramento preschool and advocates led a Twitter storm to generate discussion about the need for the bill on social media.

Moira Kenney, executive director of the First 5 Association of California, wrote in an EdSource commentary that “early learning advocates will continue to work together to answer California’s families call for relief.”  For now, she said, “we will take the governor at his word that the budget process will result in clear and continual progress towards the goal of full access.”

Over the last two years, the Legislature has added pre-kindergarten slots, but has so far fallen short in providing spaces for all low-income 4 year olds.

In 2014, then Senate President Pro-Tem Darrell Steinberg introduced a bill to expand transitional kindergarten to all 4-year-olds. But the Legislature instead added 11,500 additional child care slots.  As part of the budget process, SB 858 declared that it was the intent of the state to eventually provide “quality preschool opportunities” for all low-income children whose parents wanted to enroll them.  In 2015-16, the Legislature again added thousands of full-day and part-day child care slots when it approved its annual budget.

What is Already State Law

What AB 47 Would Have Done

An excerpt from AB 47 states the following:

On or before June 30, 2018, all eligible children, pursuant to subdivision (a) of Section 8263, who are not enrolled in transitional kindergarten shall have access to the state preschool program the year before they enter kindergarten, if their parents wish to enroll them, contingent upon the appropriation of sufficient funding in the annual Budget Act for this purpose.

Last week Governor Brown vetoed AB 47 (McCarty) – the Preschool for All Act of 2015, which set a clear marker in statute for a prudent timeline for the state to fulfill its commitment to provide access to quality preschool to all our low-income 4 year olds. In his veto message, the governor recognizes the state’s intent to make preschool opportunities available to all low-income children, and states that the discussion on expanding state preschool should be considered in the budget process. I consider that an invitation to come back stronger than ever. Please join Early Edge California in telling Gov. Brown that you now turn to him to ensure progress in expanding preschool for all low-income 4 year olds, and investing in affordability and quality in the next budget!

In the face of decades of research demonstrating that high-quality early learning has a profound impact on the trajectory of a child’s life, this is a missed opportunity to put in statute a meaningful timeframe to meet the promise of preschool. While disappointed, we’re so thankful to Assembly Member Kevin McCarty for his leadership on behalf of children and for his commitment to continue the fight for early learning in the Legislature to get this done.

I am proud of how far we’ve come with legislative and stakeholder support this year. We are grateful to AB 47 co-authors Assembly Members Bonta, Chávez, Garcia, and Rendon for their leadership on the bill; legislators across the board for the strong bipartisan support; and the broad coalition of education, health, women, parent, law enforcement, business, faith-based, local and county electeds, military stakeholders, and over 3,700 individual Californians who stood up for preschool. Let’s also not forget that earlier this year we secured more than $300 million for child development in the budget, including funding for 9,500 new preschool spaces for kids. We will carry this momentum into the budget process.

With state revenues currently exceeding the Department of Finance’s initial budget forecast, now is the time to right this wrong to our young learners. We owe it to the tens of thousands of children who still do not have access to preschool to redouble our efforts in the next year. Early Edge is committed to keeping the promise to our preschoolers, and we look forward to working with the Administration to establish a path forward that ensures all children birth to age 5 have the experiences they need to succeed in school and in life.

Early Edge California works to ensure all children have the early experiences necessary to be successful learners by the end of 3rd grade, setting them on a path to college and career readiness. www.earlyedgecalifornia.org