“CONNECT ENTHUSIASTICALLY + LEAD BRAVELY.” How To Change the Story About Community-Based Public Education

by Sarah Lahm in The Progressive | http://bit.ly/1GwRWdf 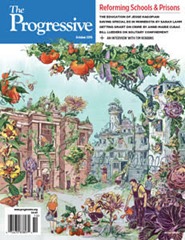 Posted: October 1, 2015  ::  Just as the Progressive launched its new "Education Fellows" project, as a way to refocus education policy on democratic, child-centered principles, one of those fellows--California professor Julian Vasquez Heilig--came to Minnesota to talk about community-based education reform.

Vasquez Heilig spoke at the University of Minnesota on September 24 to a late afternoon crowd of around 100 people. Outside the elegant, refurbished halls of the University's historic Northrup Auditorium, rain clouds threatened to explode, but inside, Vasquez Heilig warmed the audience with his insistence that they, too, can help determine what happens in our nation's public schools.

University of Minnesota professors Mary Vavrus and Roozbeh Shirazi introduced Heilig. Vavrus and Shirazi have been studying how the mainstream media helps push a negative story about public schools--that they are failing because of union policies and bad teachers.

"Our emotions are being weaponized," Shirazi said, describing pro-charter school films Waiting for Superman and Won't Back Down. Both films--the former non-fiction and the latter fiction--have a school choice lottery scene as their climax. Each has a storyline about a fed-up, downtrodden parent whose child attends a miserable, failing public school. The child's only hope is to get a seat in a stellar, "high-performing" (according to standardized test scores) charter school, which is painted as every child's educational salvation.

These films are part of a massive attempt to win our "hearts and minds," Shirazi pointed out, by depicting an overflowing, unmet demand for charter schools. Left out of the picture is the information that charters exclude students who need extra services like special ed, and results are mixed. Some schools serve some kids exceptionally well. Others have been mired in fraud and abuse. None can replace a democratically controlled, universal public school system.

Vavrus noted that the media have been complicit in promoting charter schools, high stakes testing, and anti-union policies as the best solutions for everything that ails our public school systems.

But if the dominant narrative about public schools is just a manipulative storyline pushing false solutions, what should we be advocating for instead?

Vasquez Heilig stepped to the podium to condemn what he called an "aristocratic" approach to education reform. Aristocratic reform is controlled by elites, where opportunities for profit and privatization override any thought of giving communities greater democratic control over their schools.

These elites--such as former New York City mayor Michael Bloomberg, current Chicago mayor Rahm Emanuel, and infamous reform poster child Michelle Rhee, along with the political action committee, Democrats for Education Reform—get more support from hedge fund managers than they do from local communities. Their strategies are rooted in the interests of the 1% but cloaked in the language of the civil rights movement.

The school choice movement, Vasquez Heilig pointed out, pits schools against one another based on test scores, promotes mayoral control of districts versus democratically elected school boards, and uses Teach for America recruits in high poverty schools, at the expense of investing in a well trained, diverse pool of career educators.

But for every top-down, outsider's approach, Vasquez Heilig insisted there is a community-based alternative to boosting school quality. Twenty or thirty years ago, he pointed out, assessment measures for school kids were primarily local. Then, No Child Left Behind became law in 2002.

"No Child Left Behind privatized assessment" by making it top-down and turning it over to for-profit companies such as the testing and publishing giant Pearson. Suddenly, there were "similar stakes and similar consequences" for the very different school communities across the United States.

But people who care about public schools should not give up. Vasquez Heilig, who teaches at the University of California Sacramento, spoke about the "local accountability" movement going on in California, where community groups are working with school districts on prioritizing what should be measured in their schools. Instead of measuring school quality with only a one-off test score, these schools also include other measures, such as discipline and college attendance rates, in their assessments of school quality.

Near the end of his talk, Vasquez Heilig also returned to Teach for America as a case study. While calling out TFA for its role in promoting aristocratic reform, as he does regularly on his blog, Cloaking Inequity, Vasquez Heilig acknowledged the organization's "unparalleled local and national ecology."

TFA took New Orleans by storm in the wake of Hurricane Katrina, helping push through the controversial transformation of that city's school system, where virtually no local public, non-charter schools remain. And, Vasquez Heilig pointed out, San Jose billionaire Arthur Rock--a private individual--has paid for TFA alums to be placed as education policy staffers on Capitol Hill, thereby cementing the group’s web of influence on the national reform scene. (Politico reporter Stephanie Simon covered this in an important 2013 piece, “TFA rises as a political powerhouse.”)

Instead of being defeated by the school privatizers and their lobbyists, Vasquez Heilig recommended that defenders of democratic public schools help create an “alternative media ecology.” Social media, he reminded everyone, is a “platform without gatekeepers,” and thus a ripe field for sharing the kinds of ideas that are often shut out of typical media channels. To help make this possible, Vasquez Heilig walked the crowd through the various forms of social media he uses.

Contradicting the power of the 1%, with its tightly knit, massively funded ecosystem of policymakers and profit seekers, will not be easy, Vasquez Heilig warned. Highlighting the stories of the people on the receiving end of pro-privatization education policy will lead to conflict, he acknowledged, telling the audience that they “will be challenged by powerful structures.”

Still, he offered this call to action: “I challenge you to connect enthusiastically, and lead bravely.”

Sarah Lahm is the Northcentral Regional Fellow of The Progressive Fellows