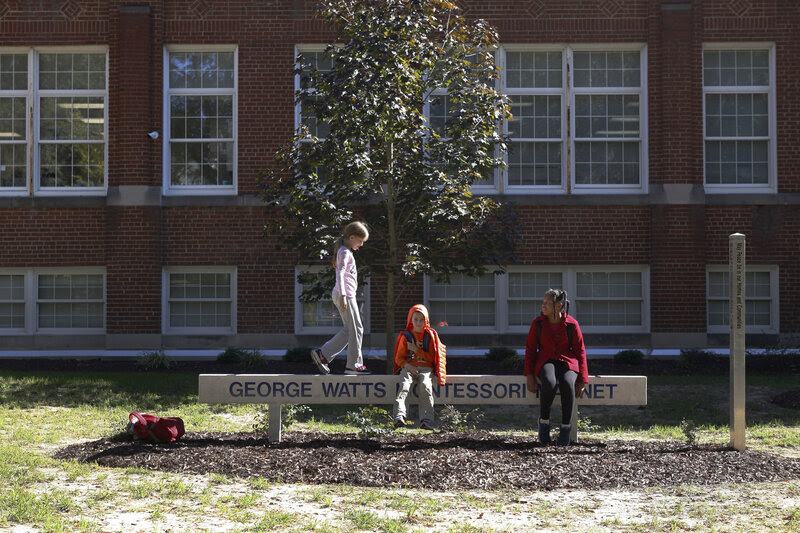 On the outside, little has changed at George Watts Elementary School over the years — except for the sign, which hints at the radical changes that have happened inside.

October 27, 2015 | 11:03 AM ET  ::  George Watts Montessori Magnet sits just north of downtown Durham, N.C., along the eastern edge of Duke University. Its sprawling, red-brick campus is nearly a century old and surrounded by gorgeously restored family homes that once housed Duke fraternities, before the university sold them off.

Each morning, the sidewalk bustles with parents walking their children to school. Dozens of families make their way to Watts' side doors, where principal Patti Crum greets everyone by name. Every one. Parents are allowed to walk right in — no security guard, no signing in. The drop-off ritual here feels, to an outsider, like the warm habit of a family dinner. 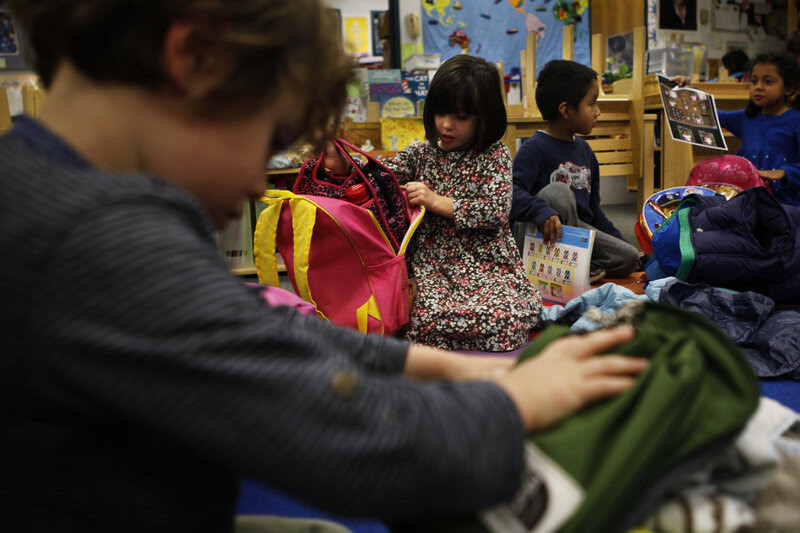 Inside, teacher Amanda Watson presides over one of the school's unusual, mixed-age classrooms, this one a preschool-kindergarten combination. Watson leads the children in a Montessori-inspired pledge:

"I am a peacekeeper," she says in a voice soft as cotton, the kids repeating after her. "I will do my best today."

Watts was named a 2015 National Magnet School of Distinction, and it is outperforming other schools nearby. This year, it had more than 900 applicants — for just 65 slots.

"We are kind of a little isolated gem," says Crum. "You know, there are signs in front yards saying, 'This is George Watts.' I mean, the Realtors are using that to sell homes."

It wasn't always this way. In 2002, Watts Elementary was in trouble.

The school was already under state review for poor performance when President George W. Bush signed the massive education bill known as No Child Left Behind, which fast-tracked a reckoning at Watts.

Now that Congress is trying to rewrite NCLB, Watts serves as an important case study for anyone trying to understand what the law got right — and wrong — in its efforts to fix or reset struggling schools. 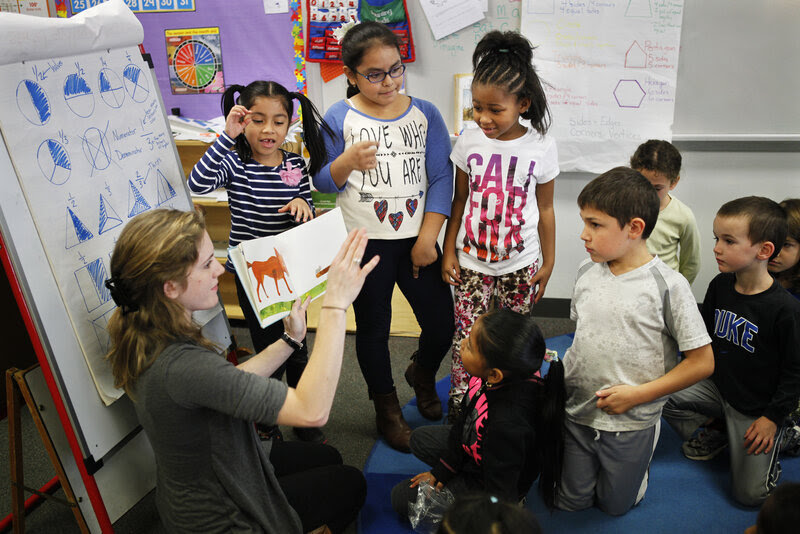 Teacher Elizabeth Carinder helps a group of her students present a book to their class.

Carol Marshall was principal of Watts the year NCLB was written.

"The minute that legislation was passed," she says, "we knew that our grade was not gonna be passing at all."

Most of its students were bused in from low-income Durham neighborhoods. Ninety percent qualified for free or reduced-price lunch. Watts was exactly the kind of school President Lyndon Johnson had hoped to help when he signed the original Elementary and Secondary Education Act in 1965 — 50 years ago.

The ESEA pours billions of federal dollars each year into schools that serve low-income kids, Johnson's best effort at leveling the playing field for poor students. "As the son of a tenant farmer," he said at the signing, "I know that education is the only valid passport from poverty." 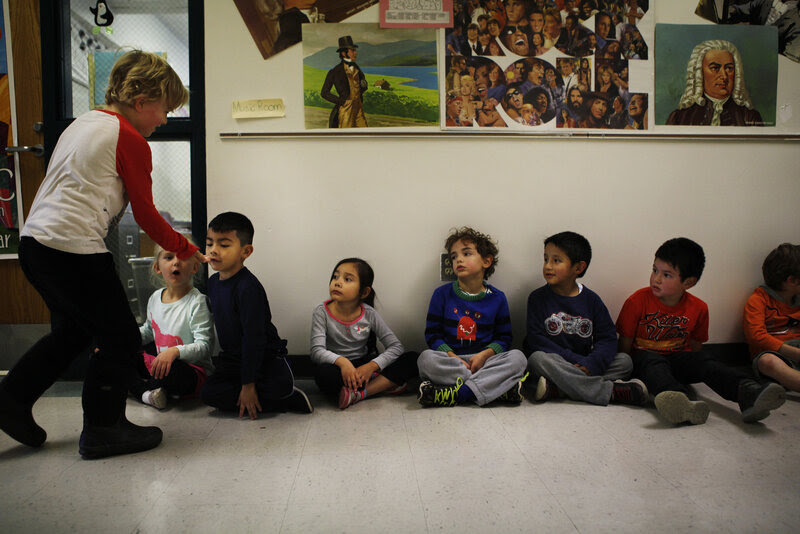 A student shows off his lost tooth to his classmates.

It was a civil rights bill for the nation's schools. In 2001, the ESEA was updated and renamed No Child Left Behind, and the law vastly expanded the federal government's role in education. NCLB forced schools to test kids annually and to meet ambitious goals. Those that failed to meet them faced tough sanctions.

Watts was one of those schools, though Marshall had worked tirelessly to improve student scores. It wasn't enough. And Marshall says being considered a failure was demoralizing. "You have to protect your teachers from that feeling — despite the fact the TV channels call you and ask you how it feels."

In 2003, after a difficult back surgery, Marshall retired early. Again, it was clear the school was in for a reckoning under NCLB, so the district planned an early intervention before the law could force one.

This is where the research of Tom Ahn comes in, with the district debating who should lead the Watts makeover.

Ahn teaches economics at the University of Kentucky. A few years ago, he co-wrote a paper about NCLB that many in Congress should be reading right now, as they attempt to update the nation's most important education law.

Ahn studied NCLB's effect on struggling schools in North Carolina — because he was working at Duke at the time. He found that, in schools where lots of kids were behind, just one thing consistently improved test scores ... 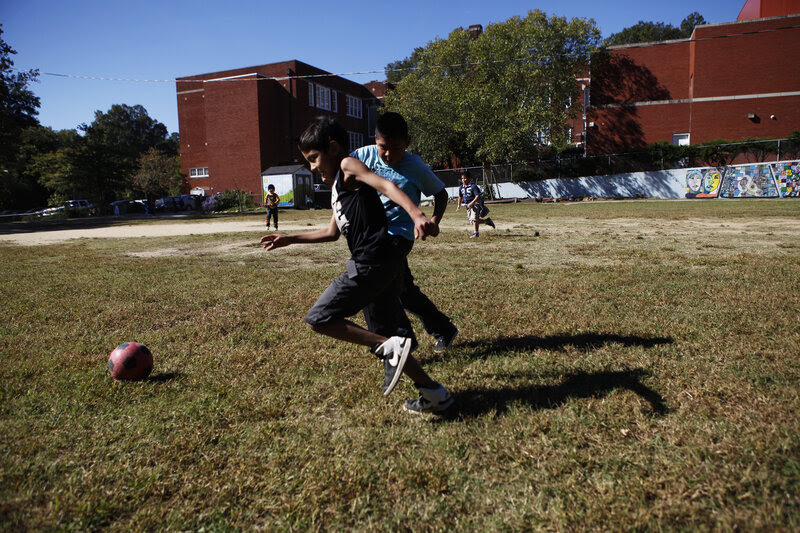 Recess means soccer on the sprawling field behind Watts. Also within the school fenceline is a walking track and a student garden.

Under No Child Left Behind, the federal government played Tough Guy. Schools had to get a certain percentage of students to grade-level in reading and math each year or take a beating. Low-performing schools could be forced to pay for tutoring, allow students to transfer, change their curriculum — even lengthen the school day.

There's just one problem, Ahn says. "These sanctions start stacking up and, at the end of the day, they don't help the schools to improve."

That is, until you get to the last, most-feared sanction — the policy equivalent of a jackhammer. Restructuring is the official term. Ahn prefers his own metaphor: "a lobotomy," he calls it.

In North Carolina, restructuring most often meant replacing the principal. And Ahn found that, more than anything else, this raised student scores as well as teacher morale. Why?

When Marshall announced her retirement from Watts, Durham tapped Nancy Barbour to replace her. Barbour was then principal at a high-performing, nearby school. When her phone rang, she was understandably reluctant.

"I think I'm good," Barbour remembers thinking. "You know, 'I'll just stay here and ride out my time.' Then you quickly realize that, this wasn't a call to ask you. This was a call letting you know that this was going to be happening."

What Barbour did was so dramatic, she doesn't think "restructuring" quite captures it. "We called it a transformation because we were transforming into something totally different," Barbour says.

Barbour did two things, both radical. Let's take them one at a time. 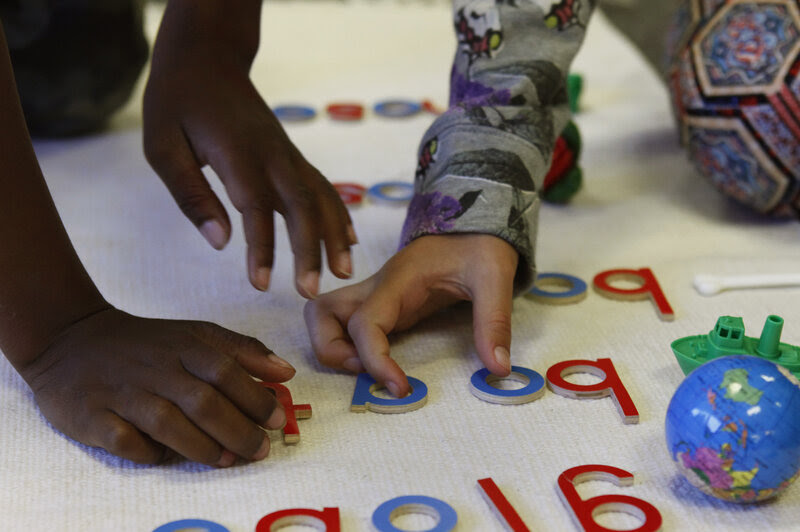 These white floor mats are one hallmark of a Montessori classroom.

First, Barbour kicked off a massive — and expensive — teacher retraining program and converted Watts into a Montessori school.

"You don't walk in and see desks," Barbour says, "and you don't have textbooks. It's just a whole different way of thinking about school."

The classrooms are also multi-age. That means kindergartners share space and teachers with preschoolers. First-graders now sit with second- and third-graders, fourth-graders with fifth-graders. 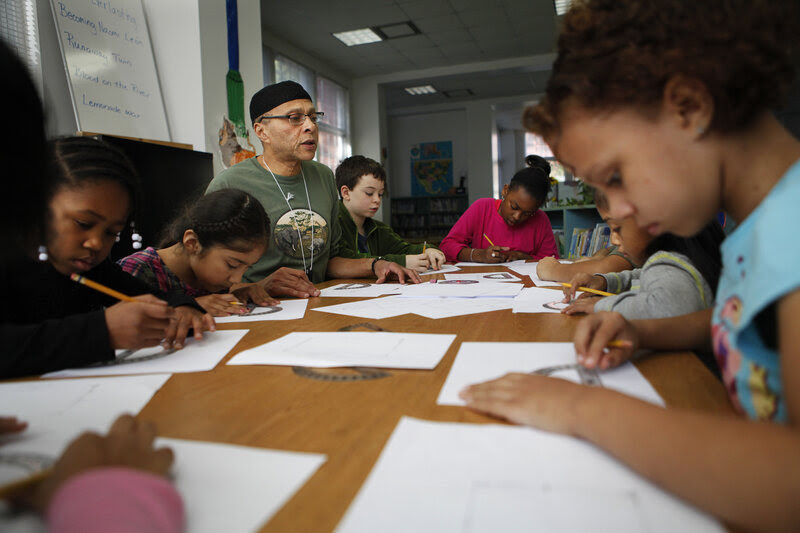 Barbour says the multi-age model puts struggling students at ease because they're in classes where kids are supposed to have varying skill levels.

The work itself is different, too, in a Montessori classroom — or, at least, how the work gets done. Students have more time to themselves, for self-directed work and play, than they do in many traditional classrooms.

Melissa Blalock, the school's Montessori coordinator, points to one more big advantage: Kids get to stick with the same teacher for more than one year.

It would be easy to credit the turnaround at Watts to this Montessori makeover. But the school also underwent a second profound change. 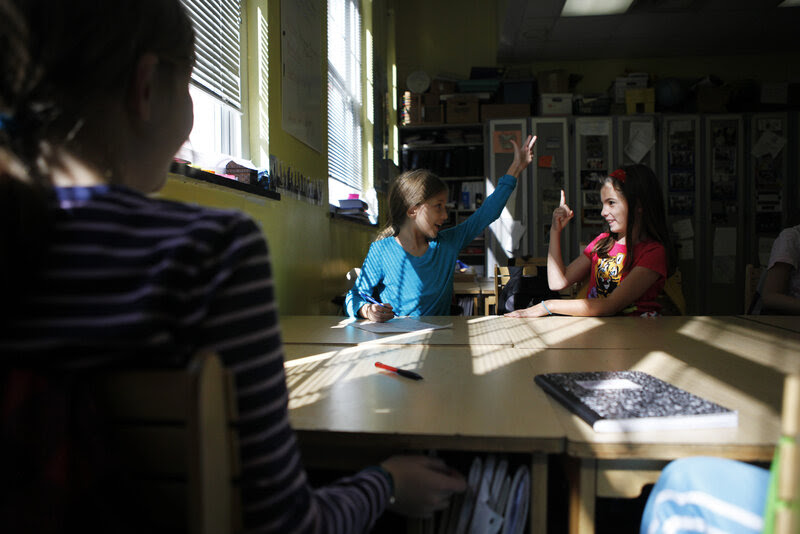 When Nancy Barbour took over Watts, she didn't just throw out the desks and mix up the classrooms. She also erased the boundaries of its attendance zone by turning Watts into a magnet school.

Today, anyone in Durham can apply to attend Watts. Emphasis, though, on "apply" because they'll need more than a little luck in the school's lottery to get in. That's because there's a built-in catch to Watts' newfound magnetism.

If families live within the roughly 1-mile area around the school, they're given priority over kids who don't. That's why real estate agents are using proximity to the school to sell houses in this gentrifying neighborhood.

It's a stark contrast to the old days, when most students were bused in and Watts was — essentially — a high-poverty, segregated school.

No Longer 'That' School

Teacher Cathy Carinder is one of the few Watts teachers who remains from those tumultuous restructuring days. She worried, back then, that the shift to a magnet school would benefit some kids at the expense of others.

"When we go and we just try to shuffle those kids other places so it becomes not our problem, we're not helping anybody, and I think too much of No Child Left Behind did that," Carinder says.

Technically, the law didn't tell Durham to turn Watts into a magnet or a Montessori. It simply said: Fix this school or else. The end of the day at Watts feels like a party in front of the school. Some students rush to board buses while parents and teachers mingle.

While much of the cost of that fix, especially the expensive teacher retraining (roughly $7,000 per teacher), was covered by the district, Barbour worries that, without the Feds playing Tough Guy, "George Watts would have just continued to have been seen as an unsuccessful 'That' school. And that's not fair."

It's also not fair to use one case study — the story of one school — to judge a law as big as No Child Left Behind. But it is instructive.

As Ahn found, restructuring can change a school for the better — and often did. Today, Watts is a vibrant, beloved neighborhood school. It's also more diverse. Segregated, high-poverty schools aren't just bad policy; they're wrong.

But the story of Watts also reveals a blind spot in the law.

NCLB forced districts to triage low-performing schools on a case-by-case basis. Looking at Watts in isolation, it's a success story. But what about the families that no longer have access to it? According to the state's own ratings, many of the schools around Watts aren't much better (if not worse) than the old Watts.

The law helped create a pocket of progress in Durham, bound within Watts' century-old brick walls. Beyond them, though, 2015 still looks a lot like 2005. Which helps explain a small wooden sign hanging in principal Patti Crum's office. It says:

"Focus on the good."