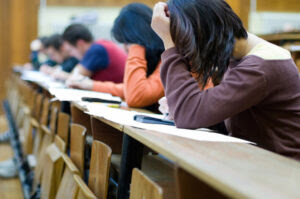 Oct 26, 2015 | The California Department of Education is recommending that the state dock the Educational Testing Service, the company administering the state’s standardized testing program, $3.1 million for delivering the scores and reports on the new Smarter Balanced tests late. The penalty would equal about 4 percent of the $83 million contract that the state signed with ETS for 2014-15.

The State Board of Education will decide whether to penalize ETS for a breach of contract at its meeting on Nov. 4. ETS, which has handled the state’s assessments for more than a decade, could ask the state board to reconsider the penalty.

Last spring, ETS oversaw the new online tests aligned to the Common Core State Standards in math and English language arts for about 3 million students in grades 3 through 8 and grade 11. Districts reported that the administration overall went well, with few serious technical glitches among more than 1,000 districts and charter schools.

However, ETS was late in reporting the results on the completed tests to school districts under the terms of the contract, according to a report in the November state board agenda. Districts were to receive paper copies of individual student reports for mailing home to parents within eight weeks of the completion of testing, which occurred in most districts in mid-June. The delay also postponed delivery of the final data file of the statewide results to the Department of Education.

The department had planned to release the statewide results in early August. That deadline was pushed back a month. Reports to parents weren’t mailed out until well into September, in some cases too late for discussions in meetings with parents on Back to School nights.

ETS’ contract for next year calls for submitting the students’ scores to districts within four weeks, so that teachers can review the results before the start of school.

Under the terms of the contract, the state was obligated to pay 90 percent of ETS’ charges as they are billed, but could withhold 10 percent – $8.3 million – until the work was completed. Then the department would verify that ETS met the conditions of the contract. The Department of Education proposes to pay $5.2 million of the remaining money but not $3.1 million because of the contract violations.

“It’s been standard operating procedure for 40 years in the industry to penalize a contractor for not making deadlines for returning results,” said Doug McRae, a retired executive from Monterey who oversaw K-12 standardized tests and has closely watched rollout of the Smarter Balanced tests. “It would be unusual for California to let them off the hook.”

ETS did not respond to a request for comment.