The L.A. Times Editorial Board (bought+paid-for by Eli Broad) whine: “IT’S TIME TO STOP THE WHINING ABOUT CHARTER SCHOOLS”

Editorial  by The Times Editorial Board | http://lat.ms/1kn11kA 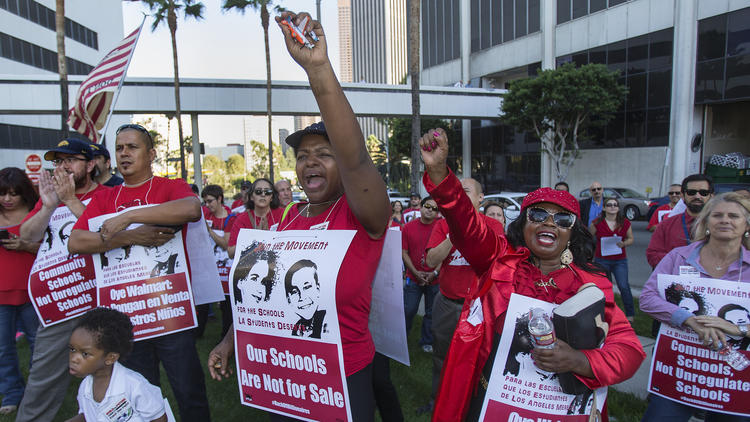 Protesters cheer during a rally to take a stand against Eli Broad's charter expansion plan outside the LAUSD School Board meeting on October 13. (Los Angeles Times)

Yet Los Angeles Unified board member Scott Schmerelson is proposing the equivalent of that with a resolution that comes before the board Tuesday taking a symbolic position against a plan to roughly double the number of charter schools in the district. Under the plan Schmerelson opposes, close to half of all students in the district would attend publicly-funded but privately-operated schools.

Concerns about the charter push aren't without foundation. The loss of more students to charters would reduce funding for the district's public schools and its programs. But many parents have embraced charter schools, which, by and large, have been well run in L.A. Unified. The expansion could be a good thing for L.A. students, providing them with more chances to attend excellent new schools.

CAVEAT: The charter expansion plan is being spearheaded by the Eli and Edythe Broad Foundation, which has also given money to the California Community Foundation and the United Way of Greater Los Angeles to support Education Matters, a Times digital initiative.

Schmerelson's resolution is a blunt instrument, yet one without real force. It would create division without action, and could backfire by making any future votes against individual charter school applications appear biased. The board is required by state law to approve all sound applications for charter schools.

The resolution declares the board's opposition to any efforts to serve some and not all students. The wording refers to concerns that some charter schools might be discouraging low-achieving students from enrolling, or pushing those who do enroll to return to their traditional public schools. Under this definition, though, the board would have to oppose many of its own programs — magnet schools, programs to teach students fluency in English and alternative schools for students with chronic behavioral problems.

A more useful proposal on the agenda, by board member Monica Ratliff, would require charter schools to disclose information to parents and staffs about their special-education offerings and curriculums, and any time the school has been served with a notice that its charter might be revoked. But the proposal would go overboard by requiring schools to reveal their teacher pay scales, calorie contents of their meals and the square footage of their play areas. Important information should be revealed to parents, but this proposal reaches beyond what's useful.

Here is the charter school resolution that L.A. Unified needs: It's time to end the conjecture about whether charter schools enroll students selectively or whether they make the achievements of their students look better by pushing out low performers. L.A. Unified should research the issue. If charters are doing that, go after them; if not, stop complaining about them.

Here's an idea: allow the LAUSD to break up into smaller districts (yes, this has to be vetted by Sacramento, but let's face, the LAUSD is way too big to effectively serve all of its students).

IMO, there are many forces working from within the LAUSD (some members on the BOE) and from externally (the Broadies and the biased LA Times) that are trying to make regular public schools look bad. And it's well known that many charter schools forced out lower achieving students to make sure their state tests are higher.

So if these millionaires and corporations want to truly help the educational system, they should stop being so passive aggressive by trying to start up "corporate" charters and simply give the money to public school systems through technology that's allocated among all public schools or donate funds to renovate libraries.