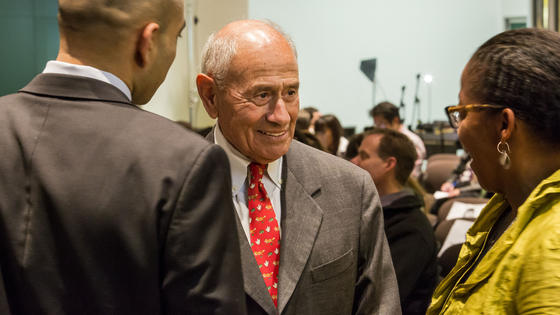 Los Angeles Unified School District Supt. Ramon C. Cortines has said he wants to retire by the end of the year.

19 Nov. 2105  ::  The Los Angeles Board of Education on Tuesday fine-tuned the list of qualities it is seeking in the next schools leader but not before quibbling over specific words and phrases.

The list of characteristics was culled from surveys and public meetings with teachers, parents, community members and others. It will be given to applicants and guide the search firm as it vets candidates to run the Los Angeles Unified School District.

Among the desired characteristics is a leader who is "politically savvy," can develop "productive working relationships with all LAUSD labor unions" and has "experience as a teacher and a principal working in an urban environment."

A candidate would not be eliminated for not meeting all the desired qualities.

The school board is looking to replace Supt. Ramon C. Cortines, 83, who has said he wants to retire by the end of the year. Cortines took charge John Deasy resigned under pressure after a series of missteps including a failed effort to provide iPads to all students that became the target of a FBI investigation.

Board President Steve Zimmer said the list of characteristics is meant to guide, not limit the search.

"These characteristics are meant to be our aspirations … and where we'd like the district to move for all children," Zimmer said.

The panel weighed whether the word "bold" was a good fit for its list of superintendent characteristics or if it was imprecise and could allow a leader to be reckless.

"I think bold is good, but I think follow-through and infrastructure is even more important," said board member Richard Vladovic. "We're in a mess right now with the iPads and I can name other things with great bold ideas that didn't have the infrastructure to follow-through."

The board also debated whether seeking candidates with experience working in an urban community would cut off worthy prospects.

"We can spend a lot of time on this, wordsmithing it, but it's been vetted and the community gave input," said board member George McKenna.

The district's next superintendent will have to take charge of a system that has long struggled to improve student achievement. That leader will also contend with a plan spearheaded by the Broad Foundation that seeks to lure more than half the district's students to charter schools over the next eight years.

District leaders are looking for ways to stem declining student enrollment from a range of factors, including charter school growth.

Critics of the projected $490-million charter expansion plan argue that it threatens the sustainability of the district and could hurt its ability to serve students. Supporters say the plan seeks to improve options for parents who are not satisfied with traditional public schools.

At a separate meeting Tuesday, a board committee reviewed a report that outlines the process for becoming an entirely charter school district. Board members said the goal was primarily to identify how the district could benefit from the same flexibility provided to charters.

Charters are publicly funded, independently operated and free from some regulations that govern traditional schools. Most are nonunion.

Board member Monica Ratliff said she did not believe that "a majority of board members want this district to go all-charter." Instead, Ratliff said the committee was simply trying to learn how it could seek more autonomy from the state.

"It's not fair that the current system provides autonomies to the charter schools and not to traditional public schools," Ratliff said.

Any decision on whether to begin the process for becoming a charter district would require a board vote.

The school district then would need more than 50% of its teachers to sign a petition favoring the change. It also would have to find alternative options for students who don't want to attend a charter school, according to the report.

State Supt. of Public Instruction Tom Torlakson and the state Board of Education must separately approve petitions for all-charter districts.

California has seven charter school districts that serve between 100 and 1,500 students. The state board has oversight of those districts.

Board member Ref Rodriguez said the conversation about all-charter districts is important even if L.A. Unified does not intend to pursue such a change.

"What it might lead us to is an application for waivers," Rodriguez said.