By The Editorial Board of Bloomberg View | http://bv.ms/1NhAV96 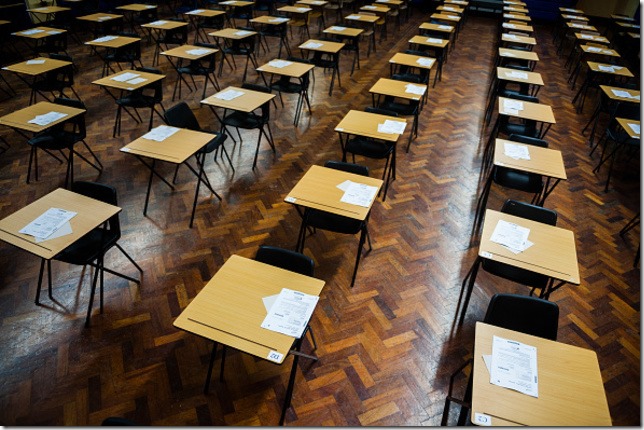 Oct 29, 2015 8:00 AM EDT  ::  Five years after dozens of states adopted the Common Core standards for public education, many are now receiving their first significant assessment results. So, has Common Core passed the test?

Contrary to the negative reactions from dismayed parents, frightened teachers' unions and conservatives wary of big government, Common Core is off to a promising start. The important thing now is that detractors not be allowed to twist the narrative to push states to drop the standards or to make it easier for parents and districts to opt out of testing. President Barack Obama didn't help matters by saying last weekend that students spend too much time preparing for standardized tests.

Nationwide, students largely scored lower on the Common Core assessments than they had on the hodgepodge of state and national tests they took previously. But this isn't a bad thing. Far too many states and districts used to game their testing results to falsely indicate that students were thriving. In Georgia, for instance, the percentage of fourth graders deemed proficient in reading dropped from nearly 100 percent in 2013 to less than 40 percent in 2015. In New Jersey, the number of high school students passing in English dropped from 93 percent to 41 percent.

The most reliable previous nationwide standard, the National Assessment of Educational Progress, has long made clear just how poorly American schools serve children. In 2013, the NAEP indicated that just 26 percent of 12th graders were proficient in math, and 38 percent in reading. Yet many states obscured that reality with their own watered-down assessments. More than half reported state test results that were more than 30 percentage points higher than their NAEP scores.

The sad consequence is that only 39 percent of American ACT test-takers are college-ready in three or more subjects, and more than half of students entering junior college and nearly 20 percent entering four-year college need remediation.

Unfortunately, some states are up to their old tricks with the Common Core results. Ohio improbably declared that roughly two-thirds of its students were proficient in reading and math -- about twice as many as in some other states. Such whitewashing undermines the standards and extends the illusion that children are learning at high levels.

Unfortunately, confusion and political wrangling is undermining the state-to-state cooperation on which Common Core was founded. Some states are now wavering in their commitment. Five have already dropped out of the program or are in the process of doing so. Others have made it far too easy for parents to keep their kids from taking the exams -- this year, one in five New York students in grades three to eight opted out. Republican-sponsored legislation in Congress would grant parents nationwide the right to do so -- an odd instance of conservatives wanting to limit states' freedom, not to mention making common cause with teachers' unions.

Instead, lawmakers and parents alike should view these results for what they are: not an indictment of U.S. schools and children, but a baseline. And a sobering but useful reminder that U.S. public education still needs improvement.

MORE OF THE SAME:

A train wreck for US reading and math scores

Administered to a sample of fourth- and eighth-grade students in every state, the National Assessment of Educational Progress has come to serve as the gold standard for gauging the performance of US students. The 2015 results were dismal. The Obama administration, which has bragged about the efficacy of its federally fueled school-reform agenda, immediately moved to aggressive damage control.

For one, focusing on national progress in average test scores obscures the fact that disadvantaged students in the U.S. have made big gains on the Program for International Student Assessment, EPI says. Some of those gains are larger than those made by similarly disadvantaged students in other countries, the paper says. It suggests that it would be more beneficial to look at what states are doing, rather than making international comparisons.

The EPI report:  "Bringing it back home:  Why state comparisons are more useful than international comparisons for improving U.S. education policy"