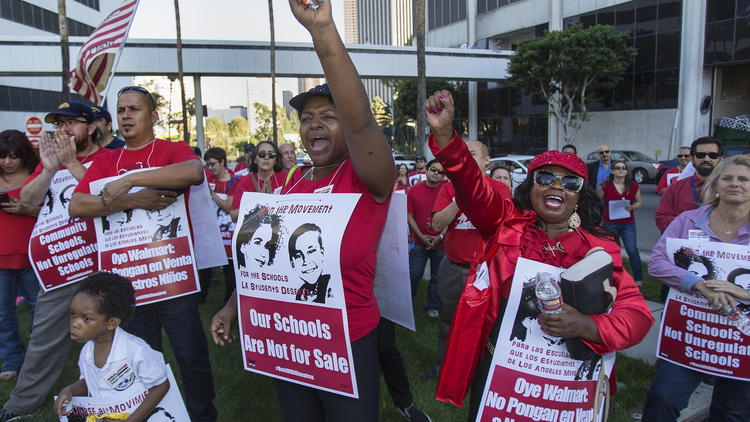 Protesters Carma Love, middle, with her son Massiah Garnett,3, and Linda Cardwell,right, cheer during a rally to take a stand against Eli Broad's charter expansion plan outside the LAUSD School Board meeting on October 13, 2015 in Los Angeles, California (Gina Ferazzi / Los Angeles Times)

18 Nov. 2015 12;08 AM  ::  Backers of a plan to greatly expand successful charters and other high-quality public schools in the Los Angeles area have formed a nonprofit organization to move the effort forward, The Times has learned.

The new organization, called Great Public Schools Now, is based in Los Angeles and will take the next steps in a plan that initially was spearheaded by the Eli and Edythe Broad Foundation. A draft of that proposal, dated in June, called for raising $490 million to enroll half the students in the L.A. Unified School District over the next eight years.

The nonprofit will be run by two executives from ExED, a local company that specializes in helping charter schools manage their business operations. Former banker William E.B. Siart will chair the governing board; Anita Landecker will serve as interim executive director. No other individuals or foundations are being included in a Wednesday release about the organization, an apparent effort to distance it from the Broad Foundation, which became a target of critics of the proposal. Eli Broad or a designee, however, is expected to occupy one seat on an 11-member board of trustees.

The goal, as described by Siart and Landecker in an interview Tuesday, would be to develop first-rate schools of all kinds — not exclusively charters. No funding target has been set, they said.

"It's the quality of the school that's the most important thing," Siart said.

Besides charters, the organization said it would work to expand or duplicate successful models of schools that are run by L.A. Unified. Charters are independently managed and exempt from some rules that govern traditional campuses. Most are nonunion.

"This effort will be aimed at replicating and accelerating the development of public schools … that have proven to be successful for kids in traditionally underperforming schools," Siart said.

The L.A. Unified Board of Education had no role in creating the original Broad Foundation plan and is scheduled to vote next week on a resolution officially opposing it. Some L.A. Unified officials, and other critics, have expressed concerns that a massive charter expansion could threaten the solvency of L.A. Unified, while leaving it with fewer resources for students who are more challenging and expensive to educate.

Separately, a small group of civic leaders signed a letter, released Tuesday, that chided the Broad effort — without opposing it — for being developed in private. They also echoed concerns about the possible financial effects on the nation's second-largest school system.

"In the short term, civil dialogue among all parties — and full parental and community engagement — would seem to be the better course of action for Los Angeles," according to the letter. It was signed by Fred Ali, head of the Weingart Foundation; Antonia Hernández, the leader of California Community Foundation; and Robert K. Ross, the top official at California Endowment.

Great Public Schools Now, meanwhile, is not backing down from the language of urgency and indignation in the original draft of the report, which was obtained and released by The Times. The plan called for 260 new charters.

"More than 160,000 students in Los Angeles and surrounding cities attend schools that are failing to provide them with a quality education," Siart said.

Landecker added: "It's unconscionable that families in many low-income communities lack the same opportunities to send their children to a high-quality school."

Charters appear to remain the primary focus, based on written materials being released. They highlight support for charters, based on a recent poll, as well as data indicating that charter schools are outperforming traditional campuses. The release also quotes the head of the California Charter Schools Assn.

"Charter schools have done incredible work in educating students from high-poverty backgrounds throughout Los Angeles," said Myrna Castrejón, acting chief executive of the charter association. "Because of this record, Great Public Schools Now will unequivocally support the replication of successful charters as a major component of their efforts."

Also included is the voice of a parent who has one child in a charter high school and another in a district-managed elementary campus.

"We don't have as many options as we would like on where to send our children to school," said Lisette Duarte, who has a child enrolled at a charter operated by Partnerships to Uplift Communities, or PUC. "Our ZIP Codes still limit us. That's why I am grateful charter schools exist and want to see them grow."

PUC is the charter group cofounded by school board member Ref Rodriguez, who has said he supports providing options for parents but has not specifically endorsed the effort.

The nonprofit was incorporated Aug. 20, Landecker said, with the stated mission of promoting "the quality of publicly funded education in Los Angeles and surrounding communities."

An official announcement was withheld until after the polling was completed and until after additional meetings with community groups and others could take place. Now, "it was time to make sure as much information as we had available could be presented to the public," Siart said.

Last week, a senior official with the Broad Foundation suggested that the charter proposal was in an early discussion phase.

"We're pleased that our early ideas for how to improve L.A.'s public schools have generated a citywide discussion and evolved into the formation of an independent organization that will work with the community toward the goal of giving every family access to a high-quality public school," Swati Pandey, communications manager of the Broad Foundation, said in a statement.