A CENTURY AGO EINSTEIN’S THEORY OF RELATIVITY CHANGED EVERYTHING 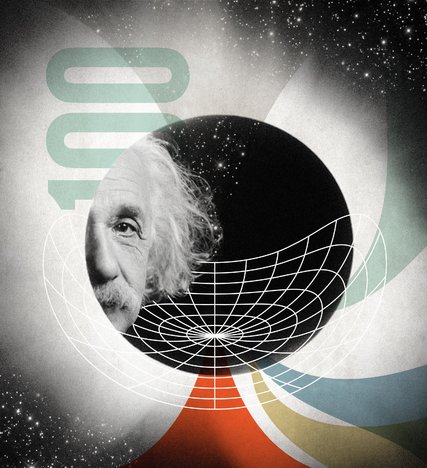 And why not? Cheered on, to his disgust, by most of his Berlin colleagues, Germany had started a ruinous world war. He had split up with his wife, and she had decamped to Switzerland with his sons.

He was living alone. A friend, Janos Plesch, once said, “He sleeps until he is awakened; he stays awake until he is told to go to bed; he will go hungry until he is given something to eat; and then he eats until he is stopped.”

Worse, he had discovered a fatal flaw in his new theory of gravity, propounded with great fanfare only a couple of years before. And now he no longer had the field to himself. The German mathematician David Hilbert was breathing down his neck.

So Einstein went back to the blackboard. And on Nov. 25, 1915, he set down the equation that rules the universe. As compact and mysterious as a Viking rune, it describes space-time as a kind of sagging mattress where matter and energy, like a heavy sleeper, distort the geometry of the cosmos to produce the effect we call gravity, obliging light beams as well as marbles and falling apples to follow curved paths through space.

This is the general theory of relativity. It’s a standard trope in science writing to say that some theory or experiment transformed our understanding of space and time. General relativity really did.

Since the dawn of the scientific revolution and the days of Isaac Newton, the discoverer of gravity, scientists and philosophers had thought of space-time as a kind of stage on which we actors, matter and energy, strode and strutted.

With general relativity, the stage itself sprang into action. Space-time could curve, fold, wrap itself up around a dead star and disappear into a black hole. It could jiggle like Santa Claus’s belly, radiating waves of gravitational compression, or whirl like dough in a Mixmaster. It could even rip or tear. It could stretch and grow, or it could collapse into a speck of infinite density at the end or beginning of time.

Scientists have been lighting birthday candles for general relativity all year, including here at the Institute for Advanced Study, where Einstein spent the last 22 years of his life, and where they gathered in November to review a century of gravity and to attend performances by Brian Greene, the Columbia University physicist and World Science Festival impresario, and the violinist Joshua Bell. Even nature, it seems, has been doing its bit. Last spring, astronomers said they had discovered an “Einstein cross,” in which the gravity of a distant cluster of galaxies had split the light from a supernova beyond them into separate beams in which telescopes could watch the star exploding again and again, in a cosmic version of the movie “Groundhog Day.”

Graphic : What Is General Relativity?

Einstein presented his general theory of relativity 100 years ago this month.

Hardly anybody would be more surprised by all this than Einstein himself. The space-time he conjured turned out to be far more frisky than he had bargained for back in 1907.

It was then — perhaps tilting too far back in his chair at the patent office in Bern, Switzerland — that he had the revelation that a falling body would feel weightless. That insight led him to try to extend his new relativity theory from slip-siding trains to the universe.

One consequence, Einstein quickly realized, was that even light beams would bend downward and time would slow in a gravitational field. Gravity was not a force transmitted across space-time like magnetism; it was the geometry of that space-time itself that kept the planets in their orbits and apples falling.

It would take him another eight difficult years to figure out just how this elastic space-time would work, during which he went from Bern to Prague to Zurich and then to a prestigious post in Berlin.

In 1913, he and his old classmate Marcel Grossmann published with great fanfare an outline of a gravity theory that was less relative than they had hoped. But it did predict light bending, and Erwin Freundlich, an astronomer at the Berlin Observatory, set off to measure the deflection of starlight during a solar eclipse in the Crimea.

When World War I started, Freundlich and others on his expedition were arrested as spies. Then Einstein discovered a flaw in his calculations.

And so the stage was set for a series of lectures to the Prussian Academy that would constitute the final countdown on his quest to grasp gravity.

Midway through the month, he used the emerging theory to calculate a puzzling anomaly in the motion of Mercury; its egg-shaped orbit changes by 43 seconds of arc per century. The answer was spot on, and Einstein had heart palpitations.

The equation that Einstein wrote out a week later was identical to one that he had written in his notebook two years before but had abandoned.

On one side of the equal sign was the distribution of matter and energy in space. On the other side was the geometry of the space, the so-called metric, which was a prescription for how to compute the distance between two points.

Albert Einstein and Relativity in the Pages of The Times

When Albert Einstein and his work first became known to the broader public, articles in The Times often seemed to alternate between exasperation and fascination. 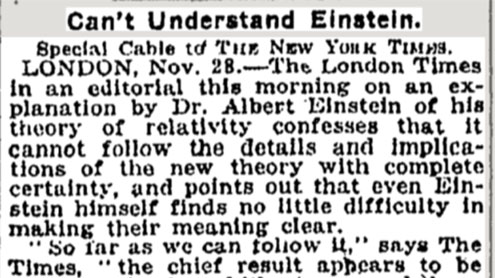 As the Princeton physicist John Wheeler later described it, “Space-time tells matter how to move; matter tells space-time how to curve.” Easy to say, but hard to compute. The stars might be actors on a stage set, but every time they moved, the whole stage rearranged itself.

It wasn’t long before Einstein received his first comeuppance.

In December 1915, he received a telegram from Karl Schwarzschild, a German astrophysicist serving at the front in the war, who had solved Einstein’s equation to describe the gravitational field around a solitary star.

One strange feature of his work was that at a certain distance from the star — to be known forever as the Schwarzschild radius — the equations would go kerblooey.

“If this result were real, it would be a true disaster,” Einstein said. This was the beginning of black holes.

That Einstein’s equations could be solved at all for a single star baffled him. One of his guiding lights had been the Austrian physicist and philosopher Ernst Mach, who taught that everything in the universe was relative. Einstein took Mach’s Principle, as he called it, to mean that it should be impossible to solve his equations for the case of a solitary object.

“One can express it as a joke,” he told Schwarzschild. “If all things were to disappear from the world, then according to Newton Galilean inertial space remains. According to my conception, however, nothing is left.”

And yet here was a star, according to his equations, bending space all by itself, a little universe in a nutshell.

Like most of his colleagues at the time, Einstein considered the universe to consist of a cloud of stars, the Milky Way, surrounded by vast space. What was beyond? Was the universe infinite? And if so, what stopped a star from drifting so far that it would have nothing to relate to?

To avoid such problems, Einstein set out in 1917 to design a universe without boundaries. In his model, space is bent around to meet itself, like the side of a tin can.

“I have committed another suggestion with respect to gravitation which exposes me to the danger of being confined to the nut house,” he confided to a friend.

This got rid of the need for troublesome boundaries. But this universe was unstable, and the cylinder would collapse if something didn’t hold its sides apart. 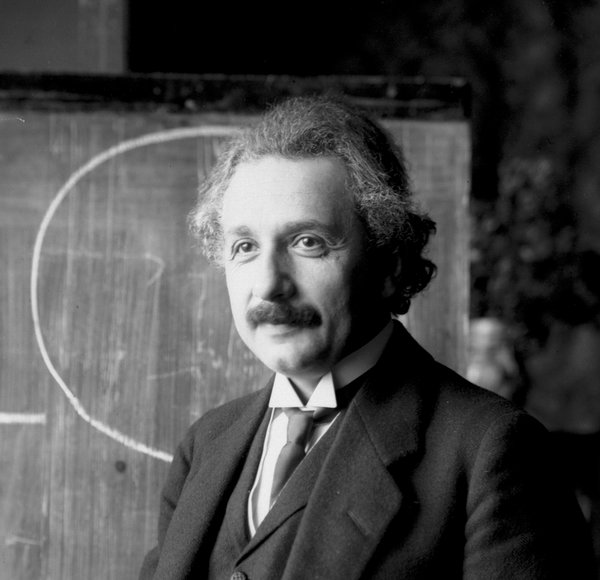 Photo: “It would be unsatisfactory, in my opinion, if a world without matter were possible.” - Albert Einstein Credit Ferdinand Schmutzer/ÖNB-Bildarchiv, via, Picturedesk

That something was a fudge factor added to the equations Einstein called the cosmological constant. Physically, this new term, denoted by the Greek letter lambda, represented a long-range repulsive force.

The happy result, Einstein thought, was a static universe of the type nearly everybody believed they lived in and in which geometry was strictly determined by matter.

But it didn’t last. Willem de Sitter, a Dutch astronomer, came up with his own solution describing a universe that had no matter at all and was flying apart.

“It would be unsatisfactory, in my opinion,” Einstein grumbled, “if a world without matter were possible.”

And then Edwin Hubble discovered that the universe really was expanding.

If the cosmological constant couldn’t keep the universe still, then forget about it and Mach’s Principle, Einstein said. “It dates back to the time in which one thought that the ‘ponderable bodies’ are the only physically real entities,” he later wrote to the British cosmologist Felix Pirani.

But it was too late. Quantum mechanics soon invested empty space with energy. In 1998 astronomers discovered that dark energy, acting just like the cosmological constant, seems to be blowing space-time apart, just as in de Sitter’s universe.

In fact, most cosmologists agree today that not quite all motion is relative and that space-time does have an existence independent of matter, though it is anything but static and absolute. The best example are gravitational waves, ripples of compression and stretching speeding through empty space at the speed of light.

Einstein was back and forth on this. In 1916, he told Schwarzschild they did not exist, then published a paper saying they did. In 1936, he and his assistant did the same flip-flop again.

Nobody said this was easy, even for Einstein.

He set out to do one thing, namely make all motion relative, Michel Janssen, a science historian at the University of Minnesota, told a Princeton gathering this month. He failed, but in the process succeeded in doing something very interesting, unifying the effects of acceleration and gravity.

The story goes to show, he said, that Bob Dylan was right when he sang “there’s no success like failure,” but wrong that “failure is no success at all.”

Einstein’s greatest success came in 1919, when Arthur Eddington did the experiment that Freundlich had set out to do, and ascertained that lights in the heavens were all askew during an eclipse, bent by the sun’s dark gravity, just as Einstein had predicted.

Asked what he would have done if general relativity had failed, Einstein said, “Then I would have been sorry for the dear Lord. The theory is correct.”

And still the champ.