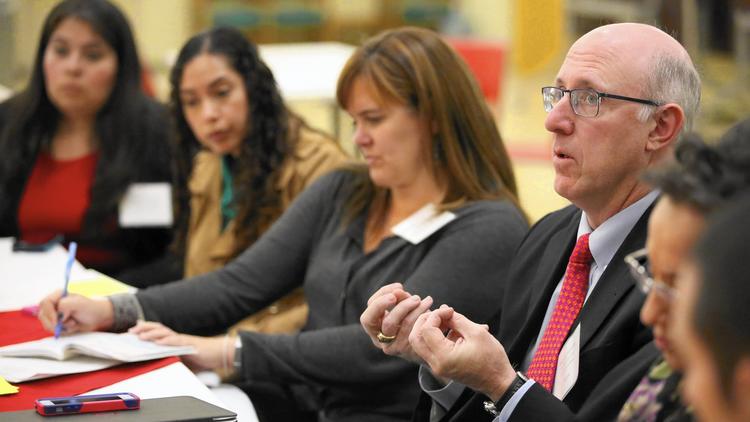 Gregory McGinity, executive director of the Broad Foundation, said during a forum on the future of Los Angeles public schools that a charter expansion could transform education in the region. (Al Seib / Los Angeles Times)

Nov. 12, 2015  | 8:50PM  ::  A massive expansion of charter schools could change the fate of Los Angeles families who have suffered from inferior schools for generations, according to a top official from the Broad Foundation, which is spearheading the proposal.

In the first public discussion involving the foundation's efforts, Executive Director Gregory McGinity said that charter schools have transformed education, and he challenged critics who say charters don't serve all students. He also disputed fears that the growth of charters could drive the L.A. Unified School District into bankruptcy.

"The overall vision is that every child has access and every family has access to a high-quality education," McGinity said during an invitation-only forum at the former county general hospital near downtown. "We have to find a way to give better options to families, and we have to do that as soon as we can."

Facing off with McGinity was school board President Steve Zimmer, who swiftly and strongly opposed the Broad plan when The Times made it public in September. Zimmer said that he is not sure L.A. Unified can survive the charter plan, and that students would be harmed as a result.

"This is not a conversation about choice," or competition or innovation, he said. "It draws us to a very honest and open place about the future of the Los Angeles Unified School District. ... This is about: Is there a future for L.A. Unified?"

Under the projected $490-million plan, half of L.A. Unified students would be enrolled in charters over the next eight years. That compares with about 16% today. L.A. Unified already has the most charters and charter students — more than 100,000 — of any district in the country.

Charters are publicly funded, independently operated and free from some regulations that govern traditional schools. Most are non-union. Many city labor unions have united to speak out against the Broad plan.

Zimmer said the charter expansion would leave the district with fewer resources to serve the more difficult and costly students who would remain in regular schools.

McGinity disputed his claim in an interview after the forum, which was sponsored by the local nonprofit group Alliance for a Better Community.

"Charters take all kids and that's what they are required to do," McGinity said.

The debate has echoed across the country. Charters are required by law to take all students who apply, space permitting. And in Los Angeles, the demographics of charter students are similar to those in traditional schools: both enroll high percentages of low-income students, for example, and both provide services for the disabled.

But critics have questioned whether charters handle their share of students with behavior problems and of those with moderate to severe needs. And they question whether charter families are more motivated toward academic success.

McGinity also responded to a new report from a panel of experts, who concluded that charter growth could threaten the district's solvency. The experts took no position on whether charter expansion was good or bad for students' academic achievement.

"I don't see LAUSD going bankrupt," McGinity said. "LAUSD, like a lot of other districts, has fiscal challenges." He added: "Other districts with a significant number of charters are thriving in terms of their operations and finances."

During the forum, McGinity insisted that the expansion plan was created "for discussion purposes."

"The plan that was released was premature and not intended for any purpose other than to get feedback," he said.

His message on Thursday contrasted with language in the cover letter philanthropist Eli Broad wrote to those who received a confidential copy of the plan. Broad's letter describes "a landmark opportunity" and his commitment to "a bold plan to expand the charter sector to serve 50% of Los Angeles public school students."

"Such dramatic charter growth would address the needs of families who have been underserved by public schools for years, if not generations," the letter says. "It would also be a bellwether for cities around the country."

The letter calls for "wide-reaching philanthropic investment" for a project that would make Los Angeles "a model for every city in America."

"Our current school system is falling short of providing a quality education to all students," said Nadia Diaz Funn, executive director of the group that sponsored the forum. The Broad plan marks what is "absolutely a critical moment" because "it poses a fundamental change in Los Angeles' public school model."

The civil tone of the forum belied the underlying tension between the parties.

Zimmer said that L.A. has the "best-performing charter schools in the nation."

But the school board is considering two resolutions that could slow the growth and independence of charters. One would have the board go on record opposing the Broad expansion plan. The other would require charters to disclose significantly more information about their operations. Next week, a school board committee also is expected to review a report looking at the possibility of making L.A. Unified a charter district, a potential counter move to the Broad plan.

McGinity said he looked forward to working with the district and communicating with employee unions. He didn't mention that the teachers union and allies of Broad have been the highest-spending antagonists in recent school board elections.

Also participating in the panel was Charles Kerchner, a research professor at Claremont Graduate University who has studied L.A. Unified extensively.

He said the challenge will be to help families today, through charters or other options, while also considering the future structure of the school district. A "big city coalition" bringing together all the parties would be desirable, he said, "I just don't know if that's politically possible." 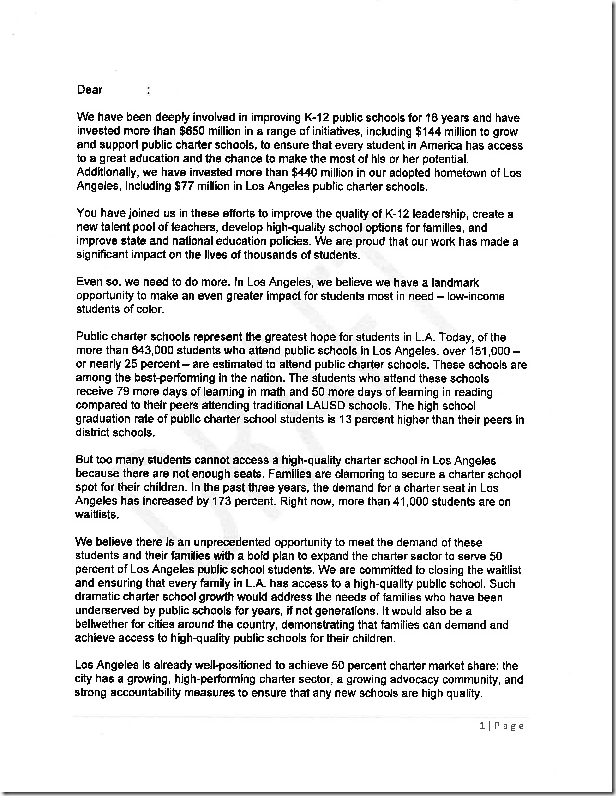 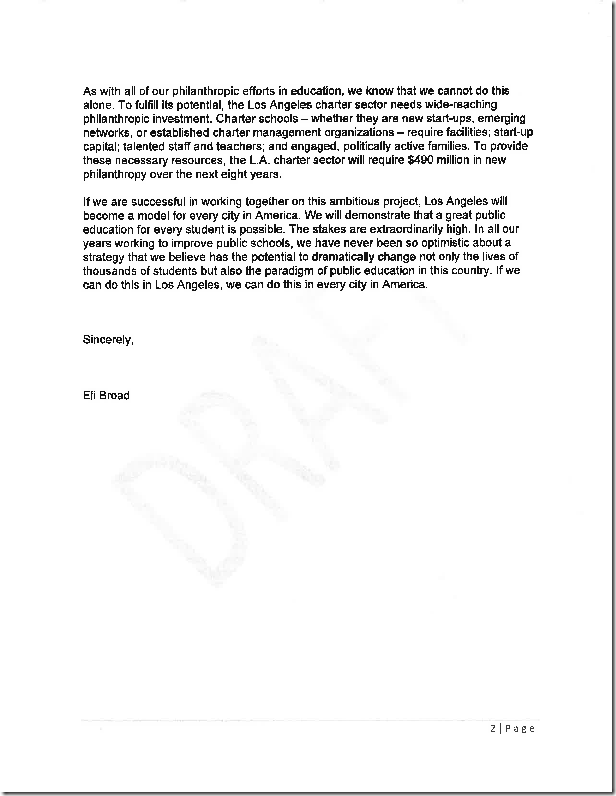