PHILOSOPHERS vs. WELDERS: CAN’T WE HAVE BOTH?

from the Educated Writers blog of the Education Writers Association, edited by Emily Richmond |  http://bit.ly/1WYrvVf

November 13, 2015  :: There was plenty of levity on Twitter in the wake of Republican presidential candidate Marco Rubio’s declaration that “we need more welders, less philosophers.” (This English major would have preferred he said “fewer” welders, by the way.) 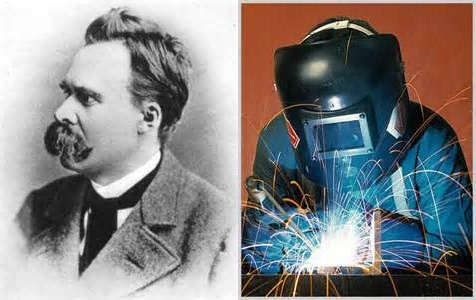 In fact, there are strong arguments to be made that welders and philosophers both fill vital roles in a well-rounded society, rather than cancel each other out. Ideally all students would have opportunities to pursue work that interests them  – whether it involves Plato or a plasma cutter.

Rubio’s larger point – that the nation has significant vacancies in the skilled trades – is a fair one. And it’s an important part of the larger debate over whether preparing all students for college is a reasonable, or even desirable, goal.

As college-and-career readiness advocates will tell you, the larger goal is to give more students choices after high school, rather than letting assumptions adults make about them as they enter high school force them into either a vocational or college prep path that determines their futures. (Tracking and ability grouping remain highly contentious issues.)

►Inside Higher Ed points out that this isn’t the first time Rubio has come down hard on philosophy majors – or the more traditional college paths, for that matter. And among many fact-checkers to challenge Rubio’s claims that welding is a more lucrative field than philosophy were Politifact, Vox, and the Washington Post. To be sure, there is not a clear winner. As Boston Globe columnist Mark Pothier notes, the Bureau of Labor Statistics’ pay scales for those professions encompass several different types of jobs that vary widely by location. That being said, you’ll certainly find more job openings listed nationally for welders than those demanding philosophy degrees.

►But the gold medal goes to the New York Times for actually finding a philosopher-turned-welder who has written a book extolling the virtues of his overlapping fields.)  Matthew B. Crawford found work at a think tank after graduating from the University of Chicago with a degree in Philosophy, the New York Times reports. But he was unhappy, and later became a welder and author. From the New York Times:

One of his books, “Shop Class as Soulcraft,” is devoted to debunking the notion that manual trades are mindless. “The division between knowledge work and manual work is kind of dubious, because there is so much thinking that goes on in skilled trades,” Mr. Crawford said. As for the payoff, Mr. Crawford rejects the idea that philosophers cannot figure out how to earn a living.

“It’s obviously kind of a reductive approach to think of your course of study in college as merely a means to a paycheck,” Mr. Crawford said, suggesting the study of things like happiness can be enriching in ways that are hard to measure. “And nobody goes into philosophy because they think it’s going to make them rich.”

Writing for the Washington Post earlier this fall, Jeff Selingo dug into a Gallup Poll of 30,000 college graduates. Just 38 percent of individuals who graduated within the past 10 years “strongly agreed” that college had been worth the money. The numbers were even lower for graduates with student loan debt. But as Selingo reported, that’s not surprising given the brutal hit the recent recession put on the nation’s job market:

For many of those with newly minted bachelor’s degrees, the job market is still not what it was for their counterparts a decade ago. The unemployment rate for recent college graduates has remained stuck around 9 percent. And nearly half of college graduates in their 20s are underemployed, meaning the jobs they have don’t require a bachelor’s degree.

The question of whether students should be prepared for college or careers isn’t a new debate. It’s one that surfaces periodically – typically during times of economic downturns. The higher education community is continually struggling with how to prepare students for the jobs that await them, a particularly tricky task in fast-changing fields like science and engineering. High schools, as well, are rethinking career and technical education, which increasingly is replacing traditional vocational programs.

At the same time, it’s important to remember that the push to prepare more students for postsecondary education doesn’t always mean sending them off to a four-year college. In fact, a study by Georgetown University predicted that by five years from now, 65 percent of jobs will require some form of advanced education beyond high school – including certification, and both two-year and four-year degrees.

What does this tell us? For one thing, examining the relative merits of college requires a more complicated conversation than a one-liner in a debate or candidate’s stump speech can fully address. As my colleague Mikhail Zinshteyn wrote recently, “one aspect of higher education that has been overlooked is the recipe required to transform a college education into a set of skills that prepares students for the workspace. As it turns out, neither colleges nor employers have a firm grasp on what flavor that special sauce should have.”

So what’s the solution? Zinshteyn’s piece outlines some innovative ideas from Sandy Shugart, president of Valencia Community College in Orlando (a school that’s recognized as a national model for its approach to career preparation), which hosted EWA’s Higher Education Seminar in September.

The traditional formula, in which college students get their prerequisite courses out of the way in the first two years before moving on to their “major” area of concentration, requires them to “defer [their] gratification long enough and stay in school long enough” before moving on to what they really want to learn, Shugart said. Instead, the students should have opportunities for work experience earlier in their college careers.

“No class will ever replace work as a place of learning,” Shugart said. “And we still haven’t mastered that in our education model.”