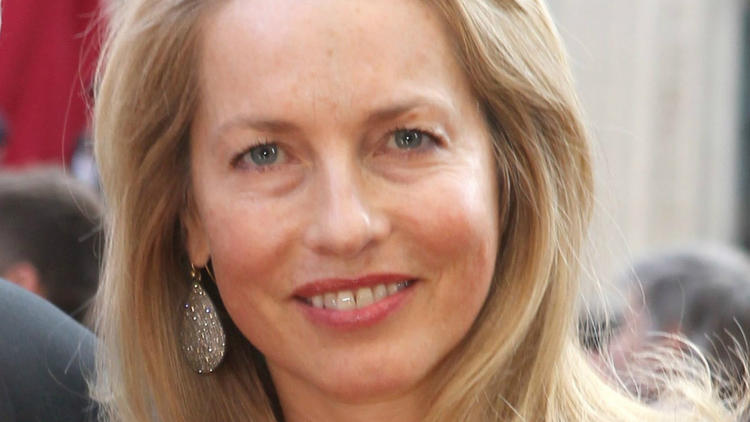 Laurene Powell Jobs is expanding her role in education philanthropy in Los Angeles through the nonprofit College Track. Another group she heads, Emerson Collective, has taken sides in the polarizing debate over how best to improve schools. (Alexandra Wyman / Getty Images)

16 November 2015  ::  Laurene Powell Jobs, the widow of Apple founder Steve Jobs and an important player in the funding of hotly debated education reforms in the U.S., is expanding her involvement in Los Angeles schools.

Her organization, College Track, announced last week it will support dozens of students attending Jordan High School in Watts through a program designed to help them prepare for college and then earn a degree. College Track has established a similar program at Roosevelt High in Boyle Heights. The program is underwritten in large part by Emerson Collective, a Bay Area-based group also headed by Powell Jobs.

In the first year, 55 Jordan students, who were selected after a brief interview process, will participate. The program accepts students in the summer before ninth grade and works with them through college graduation, providing academic support, leadership training, college and financial aid advising and scholarships totaling up to $5,600 per student.

“I am thrilled to see College Track bring its incredible program to Watts, which will help us ensure this great community is a platform for educational, social and economic mobility,” said L.A. Mayor Eric Garcetti, in a statement. Garcetti joined Powell Jobs in last week’s ceremony at Jordan High. “This complements broader efforts across Los Angeles, as we tell our young people that we don’t just want them to go to college — we expect them to go to college, and we'll give them the tools to get there.”

The program hopes to serve 300 students per year at Jordan by 2019. The Boyle Heights location, which opened in 2012, expects to reach 300 students per year by 2016.
Powell Jobs is one of the wealthiest individuals in the United States, with a net worth of $19.1 billion, according to Forbes. Although known for keeping a low public profile, Powell Jobs attracted attention recently with her announcement of a $50-million project to reshape the American high school.

“It’s our privilege to work with College Track students as they chart their course toward a college degree — they bring persistence, creativity, and extraordinary discipline throughout their academic journey,” Powell Jobs said in a statement. “We know these students from Watts will go on to fulfill their dreams, and help transform their families and communities in the years to come.”

Emerson also has been active politically, and, according to the journal Inside Philanthropy, formed as a corporation rather than a nonprofit to provide more leeway for its operations. Its status also comes with fewer disclosure requirements. One notable donation was $200,000 to the L.A. school board contests in 2013, in support of candidates backed by then-Mayor Antonio Villaraigosa, who was trying to solidify the position of then-Supt. John Deasy. 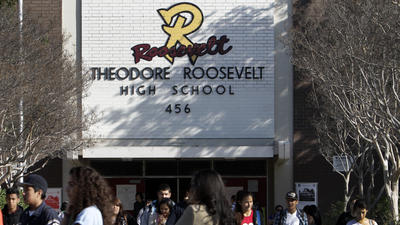 That effort fell short and Deasy ultimately resigned under pressure a year ago.

Deasy had long sought more involvement in L.A. Unified from Powell Jobs and other philanthropists. His entreaties included a quick trip to New York City in 2014 to meet Powell Jobs and another Emerson official--the school district paid $900 for his one-night stay at the Four Seasons hotel.

Both Deasy and Emerson played notable roles in the 2014 Vergara lawsuit, which resulted in teachers tentatively losing traditional job protections, on the grounds that these employment rules were harmful to students. Deasy testified in favor of ending the job protections; supporting that position in news conferences outside the courtroom was Emerson’s top education officer, Russlynn Ali.

The Vergara verdict is on appeal.

The two L.A. campuses benefiting from College Track are managed by the Partnership for Los Angeles Schools, which was under the control of Villaraigosa while he was mayor and retains a relationship with him. The Jordan campus also has a charter school run by Green Dot, whose students will participate in College Track as well.

Charters are independently managed and exempt from some rules that govern traditional public schools. Most are nonunion.

Teachers unions and their allies have criticized the thrust of policies backed by Emerson, Deasy, the locally based Broad Foundation and others--saying they rely too heavily on charter schools, punitive measures and test scores.

College Track, which started at a high school in East Palo Alto, has not been a target of these critics. Over 18 years, the program has expanded to L.A. as well as three other sites in California and locations in New Orleans and Aurora, Colo.

The L.A. project was launched in partnership with, among others, the i.am.angel Foundation and California Endowment, which each pledged $1 million to the Boyle Heights site, said Saskia Pallais, executive director for College Track Los Angeles.

The Wasserman Foundation pledged $1 million each to Boyle Heights and Watts. And Emerson will provide $1 million to the Watts location. College Track is incorporated separately from Emerson, said Pallais.