Sandy Banks: IN LAUSD, RESTORATIVE JUSTICE IS LITTLE MORE THAN A SLOGAN 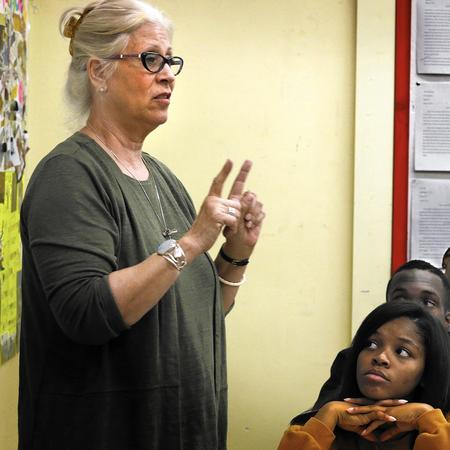 Nov 10, 2-15  ::  Restorative justice is a wonderful concept; a way to make student discipline less punitive and more productive. But in Los Angeles Unified, it's little more than a slogan, generally misunderstood and rarely applied.

The district did a lot of chest thumping two years ago, when it became the first in the nation to ban suspensions for classroom misbehavior. But as a Times story revealed this week, alternatives have been slow to materialize — and both teachers and students are paying the price.

The number of suspensions has plunged, but classes seem more unruly, teachers feel under siege and teachers and administrators are calling in school police more often to handle disruptive students. That's the opposite of what the ban was supposed to accomplish.

The problem is not the ban. Sending a student home should not be used — as it had been for years — to punish class clowns or mouthy kids. Suspension increases the likelihood that a student will fail a grade, drop out or wind up in the juvenile justice system. It ought to be reserved for the most serious violations and incorrigible troublemakers.

But — with good intentions and bad planning — Los Angeles school officials put the cart before the horse:

A restorative justice process should have been in place when the no-suspension policy took effect. Instead, the district is phasing it in so slowly that two-thirds of campuses haven't been trained on what it is and how it works.

“It isn't the complete answer or the only answer, but it's a really good tool. - Ed Azzam, the discipline dean at Westchester High”

In Oakland, where the program was initially promoted and funded by a community group, restorative justice has been working well for a decade.

It has cut suspensions in half. But it's more than a discipline tool. Reading scores and graduation rates have risen dramatically, and chronic absences have declined. Even parents are signing up for the training.

The process is built around the sort of ritual that might have been used eons ago to handle tribal feuds. A group forms a circle, the leader poses a question and everyone gets a chance to speak, no interrupting or disagreeing allowed.

Used regularly in classes, it's supposed to prevent discipline problems by fostering a sense of empathy and respect among students, and between teachers and pupils. When problems occur — classroom belligerence, a fight on campus — counselors host circles to help students see the error of their ways.

"It isn't the complete answer or the only answer, but it's a really good tool," said Ed Azzam, the discipline dean at Westchester High, which introduced the program last year.

"The key is developing a relationship with the kids, so I'm not the enemy," said Azzam, who's been at the school for 37 years and coaches its championship basketball teams. "If it's an adversarial relationship, one of us has to lose. And that's not the way it should be at school."

Westchester High English teacher Johanna Bernstein began using the restorative justice ritual last year. I didn't know that before I visited her class last week — but I was struck by the respect the students displayed, for their teacher and for one another.

Bernstein's Friday circles were often built on education themes: What do you remember most from class discussion this week? What do you have in common with any character from the book we're reading?

There as no right or wrong, no cross-talk, no criticism. Sometimes the questions are more personal: What are you looking forward to this weekend? "The students got a chance to hear their own voices," she said. "It did bring about a change in the room."

But it also took the equivalent of one class period a week. That's why some teachers are reluctant to use it.

And it didn't take the place of consequences, the teacher told me, as a cellphone vibrated in her pocket — one she'd confiscated from a student in her class that morning.

Bernstein hasn't been able to use restorative justice this semester. With 45 students, her English classes are too large and more apt to spin out of control.

What would it take, I asked, for every campus to adopt the process that showed such promise at her school last year?

Beyond that, it might require a shift in our thinking, so that teaching is more about relationships than authority. And teachers can focus on instructional needs, instead of being sidetracked by minor offenses.

If you're preparing to tell me it's the parents' fault, move away from the keyboard now. That may be true, but that's another column. The reality is once those children arrive at school, whatever family problems exist are bound to seep into the classroom. It's in everyone's interest that teachers are equipped to deal with it.

So what can we do to make restorative justice a fixture in our newly progressive school district?

The first step is smaller classes. Not even the most skilled and caring teacher should be expected to keep order while teaching algebra to 35 squirrelly middle schoolers.

Then take that testing coordinator position and spend the funding for it on a restorative justice trainer, so that every school has a counselor to ease the burden on harried teachers and reach struggling students who need someone to listen.

Enlist parents; make the circle a part of "Back to School" night. Sure, the folks who need it most might not show up. But those who do might make good use of the insight.

And involve students in the process — from mediating disputes to coming up with consequences.

At one school I visited, the teacher took a rowdy kid and made him a peer counselor. He rose to the occasion and thanked her later. No one had ever trusted him with responsibility before.

Banks is right: ‘Restorative justice is a wonderful concept; a way to make student discipline less punitive and more productive.’

We were doing RJ a decade ago at Reed Middle School and we were not alone – we just called it “Talking Circles” or “Council”.

But the District’s implementation of RJ  shows what happens when you take a good idea, make it a “brand”, proclaim it to be a “magic bullet” - torn it over to the operations department  and run it through the bureaucratic process.

It becomes about the process and checking off the the steps and the rubric and the rules; not about the outcome. Plus RJ is an intervention – it’s what happens when students misbehave. Call me Pollyanna, but where is Prevention and Education?

A lot of things have to be present at schoolS to make this program work. You need a stable staff of teachers and students who know the program and who participate actively in it. This rules out many inner city schools that tend to have high turnover in staff and students. This program reminds me of the impact program that also used talk circles with students to promote better communication btw students and thereby less conflict. It lasted 4-5 yrs and made questionable impact. As one commenter said, small class sizes, more counsellors, all things the district says it can not afford. My opinion about this program, limited effectiveness to no effectiveness. Most effective in schools with no serious discipline problems.