L.A. UNIFIED WANTS TO KNOW IF STUDENT’S FAMILIES HAVE EVER BEEN IN THE MILITARY 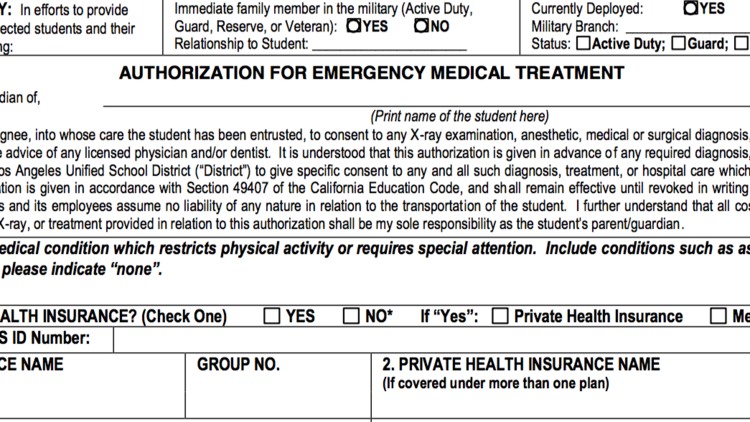 (Los Angeles Unified School District)  ●●smf:  The question decidedly does not ask if the parent “has ever been in the military or are veterans” – it is in the present tense.

Those students, officials say, could be at a higher risk for stress, behavioral problems and other issues that could be addressed at school.

Over the summer, L.A. Unified School District included some new questions on the emergency forms sent to all students, asking whether they have family members serving in the military or who are veterans.

But only 400 of the district's 650,000 students responded that they have immediate family who are currently or were previously in the services.

Debra Duardo, executive director of Student Health & Human Services for LAUSD, sensed that the number was far too small. Duardo suspects the inaccuracy came either from the district’s technical glitches or because principals were wading through too much work to notify teachers and students of the addition, which was in small print in the middle of the page.

As a result, the district is renewing a push to publicize the new questions, timed with the week of Veteran’s Day. On Thursday, schools Supt. Ramon Cortines and Mayor Eric Garcetti announced the change at a news conference.

The effort came about as a collaboration through the Mayor's Office of Veterans Affairs, LAUSD, USC’s Building Capacity Project and the Los Angeles Veterans Collaborative. USC is donating 5,000 guidebooks on helping military students to the district.

“Nobody knows where the veteran kids are because nobody’s kept track of them,” said Ron Avi Astor, a professor in education and the USC School of Social Work who helped develop the new initiative.

Astor has researched the effects of war on the children of soldiers and veterans, and found that students whose parents are or have been active in the military are likely to be at a higher risk for suicide attempts, victimization, weapon use and drug use.

As a result, students can be seen as bullies or depressed. “Sometimes the solution to those things is related to … the burden that these kids have carried along with their parents,” Astor said.

The risks increase, Astor says, because children whose parents are in the military frequently change schools, which can make it difficult to get help. And when a parent leaves for war, a child can be forced to take on the financial and logistical management of their home.

Duardo has seen these issues firsthand.

“Students were coming seeking support services because they were military children and were suffering from anxiety, stress and fear of separation,” she said. “We found that some of our older children were being more rebellious and were at higher risk of engaging in self-destructive behavior.”

Schools across L.A. Unified tried to help these students one at a time, but Duardo and her team thought it might be a more systemic issue. So she connected with USC and reviewed the research, and decided that the district needed to find a way to identify students.

“This small change will radically increase our capacity to support veterans and their families as they adjust to life during and after military service,” Garcetti said in a statement. A release from the mayor’s office called LAUSD “the largest school district in the nation” to start asking these questions.

Identifying students, Duardo said, will allow schools to understand why students connected to the military might have behavioral problems, poor attendance, or are failing their courses.

Ideally, once a student is identified, she said, an early alert system would determine who gets extra attention. If a student is deemed to truly be at risk, she said, the school would schedule a parent conference and notify them of available services. If necessary, LAUSD could refer a student to one of its 14 wellness centers.

LAUSD also could be eligible for federal grants that provide extra help to schools with high proportions of students from military families. Duardo said the district could use those funds for social workers.

“As a veteran, I have seen firsthand the sacrifices made by our men and women in uniform. Their families also pay a price,” Cortines said in a statement. “At L.A. Unified, we want to do everything we can to help these students and their families, who deserve our heartfelt appreciation for their service.”