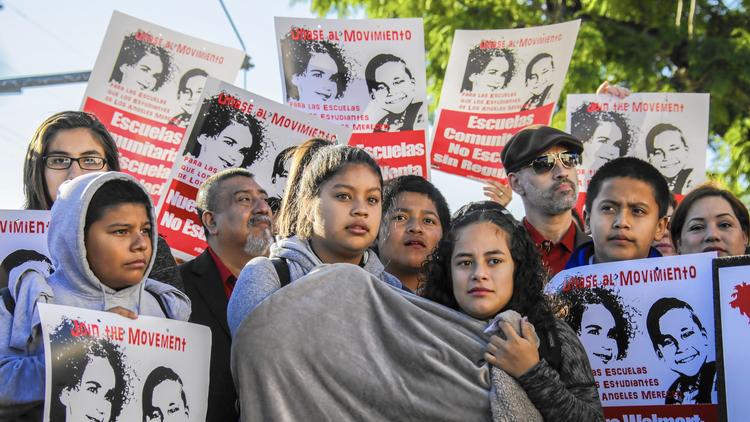 Teachers and children rally at Stevenson Middle School in East Los Angeles against a proposal, spearheaded by the Broad Foundation, that would move half of L.A. Unified students into charters over the next eight years. (Irfan Khan / Los Angeles Times)

After years of "No Child Left Behind" and "Race to the Top" initiatives, national test scores dived deeper into failure and mediocrity in the last reading. In a stunning reversal, the Obama administration, a tireless champion of more and more testing, is now whistling a different tune.

There's too much testing going on out there.

Arne Duncan, Obama's education secretary, said his conversations with countless educators have made him realize "how much time testing and test prep are taking from instruction."

It couldn't happen too soon in test-oppressed California, where recent headlines tell a sobering story about achievement, or lack thereof.

So what's wrong in Los Angeles?

The first problem, which never gets enough attention in the school-reform debate, has nothing to do with schools. LAUSD is a district made up primarily of poor children, and to be fair to district administrators and teachers, this presents daily challenges that are unknown to more affluent districts.

The second problem is that in L.A. Unified, it's rarely clear who's in charge, and that's certainly the case now.

The last superintendent, John Deasy, was shooed out of office in part because of his own blunders and the unresolved question of who was captain of the listing ship — Deasy or the school board. And there are signs that board members, terrorized by Deasy for so long, never recovered from their PTSDeasy.

The current superintendent, Ramon Cortines, is a temporary fill-in and lame duck who wants only one thing for Christmas: his retirement papers.

And the search for a replacement is a peculiar and naturally contentious spectacle, part public but mostly private, involving a private consulting firm. Because you can never hire too many outsiders while schoolhouses deteriorate and bean counters warn of a projected $333-million deficit in a district with a shrinking enrollment.

Complicating the search for a new boss is a lack of consensus as to what kind of superintendent the district should go after.

You'd almost have to scratch anybody naive enough to want the job, especially if a flak jacket and Humvee are not part of the package. The new superintendent will be rolling straight into the crossfire of a raging war between charter school champions and charter school foes.

That's not a new conflict, but the stakes got higher when The Times' Howard Blume broke the story of a massive $490-million plan — mapped out in secret — by billionaire philanthropist Eli Broad and other self-anointed saviors of the American way. They'd like to funnel no less than half of LAUSD's schools into charters, rescuing them from the rusted machine of district bureaucracy and politics.

The teachers union, which would lose busloads of its members and much of its clout, is militantly aggrieved and philosophically opposed to what it calls the corporatization of public schools. The union contends with reasonable logic that a dramatic multiplication of charters — not all of which are necessarily a better alternative — would drain money from non-charters, leaving many of the district's poorest students in the lurch.

Broad, I should note, isn't the only local billionaire making headlines for claiming to know what's missing from local school options. David Geffen, apparently unimpressed with the public and private school offerings in West L.A., last week pledged $100 million to establish a private middle and high school on the UCLA campus for the children of UCLA staff and others, with financial aid for 40% of the students.

It's a lovely gesture but part of a rich-get-richer narrative, if you ask me. UCLA has a $2.2-billion endowment as it is. Geffen made his fortune in music and film, and after The Times' recent expose on devastating reductions in LAUSD arts programs here in the world's entertainment capital, it would have been nice to see the mogul come to the rescue. There are school bands without horns and canvases without paint brushes, and the hardest-hit programs are in the poorest ZIP Codes.

But it's Geffen's money, just as it's Broad's money, and if one or both have a lack of faith in L.A. Unified's ability to provide good options for every student, can you blame them?

Let's not forget that tens of thousands of students are on waiting lists for charters because they're not wild about the schools they're in.

And what's the school board doing?

It's trying to head those parents off at the pass. Board members are obsessed with talking about and introducing motions to stall charter growth. New board member Scott Schmerelson said he opposes the Broad plan and wants to instead prioritize "access to quality public education for all students."

Then clam up and get to work on that, already.

Track down, study and clone the best principals.

Find ways to give teachers the gift of smaller classes.

Do some screaming about California's shameful national ranking in student funding.

Celebrate and replicate the district's many strong magnets and other schools, so parents don't go looking for charter alternatives.

Ban 12-hour board meetings that do nothing but raise the level of noxious gas.

Set coherent policies that serve the interests of students rather than adults, hire a superintendent to implement them, and get out of the way.

And just as Arne Duncan came to the realization that testing is no substitute for instruction, keep in mind at all times that pontificating, grandstanding and politicking are no substitutes for leading.