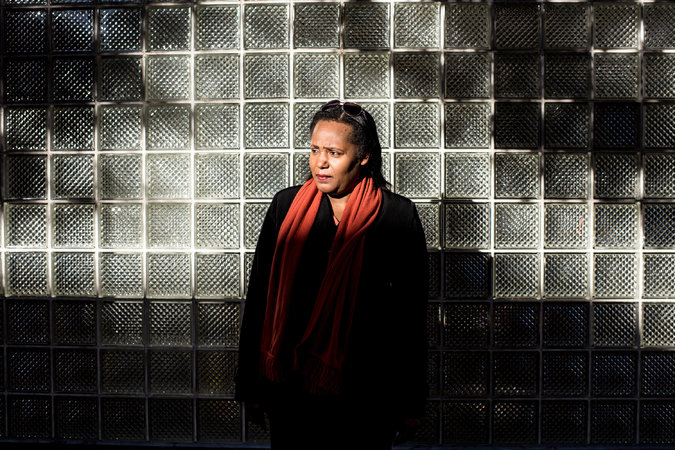 Dottie Morris of Ocean Hill, Brooklyn, is part of a group of parents who are suing the Achievement First charter school network. Credit Andrew Renneisen for The New York Times

NOV. 5, 2015  ::  Special education students at a Brooklyn charter school did not get mandated services and were punished for behavior that arose from their disabilities, according to a lawsuit filed in federal court on Thursday.

The suit, filed on behalf of five students at Achievement First Crown Heights, described a “systemic failure to provide them a free appropriate public education, in violation of their rights.” It said that students did not get physical therapy and other services for weeks at a time, and that a student with autism was disciplined for not looking in the direction a teacher instructed or for hiding under his desk.

In addition to the charter network and the school, the suit also named the New York City Department of Education and the New York State Education Department, asserting they failed to make Achievement First, a network with schools in Connecticut and Rhode Island as well as in New York City, live up to its responsibilities.

“Kids with special needs not only should be granted accommodations for their needs, but they must be under federal and state law,” said Michelle Movahed, a senior staff attorney at New York Legal Assistance Group, a nonprofit group that is representing the students and their families. “This is not just a question of doing the right thing.”

Charter schools are publicly financed, but privately run, and they are required, like regular public schools, to provide individual learning plans for children with special needs.

The suit comes at a time when charter schools, especially those in the Success Academy network, have come under scrutiny for their enforcement of strict behavior codes, suspending even the youngest students. But advocates and families say that in both charters and traditional public schools, it can often be a struggle to ensure children with disabilities receive the services to which they are entitled.

A spokeswoman for Achievement First said on Thursday that the organization was reviewing the lawsuit. In a statement, she strongly defended the Crown Heights school’s record with special needs students.

“We serve a substantial number of students with both modest and significant special education needs, and our school leaders, teachers and other professionals work tirelessly each day to serve all our students well,” Leonore Waldrip, a spokeswoman for the charter network, said in the statement. “Most of our students who receive special education services are experiencing real growth, and we have high levels of overall parent satisfaction.

“That said, we constantly strive to improve our program and, in particular, have made significant improvements in our special education supports in recent years,” she said.

Dottie Morris, who has two children at Achievement First Crown Heights, said she had been battling with the school for years on behalf of her son, a third grader identified in the suit by his initials, D.W., to protect his privacy.

Ms. Morris said that despite her repeated requests, it took Achievement First more than two years to provide a paraprofessional to help her son. This school year, the suit asserts that Achievement First and the city’s Education Department did not provide D.W. with occupational therapy for about five weeks and physical therapy for two months, and that no makeup sessions have been arranged.

Achievement First Crown Heights has also punished D.W., who is autistic, for “behaviors that are caused by, or have a direct and substantial relationship to, his disability,” according to the complaint.

D.W. was punished by the school for not looking where he was instructed to, or for “perceived misbehavior in the noisy, crowded cafeteria, an environment that can be overstimulating to children with D.W.’s diagnosis,” the suit said. His punishments have included being sent, as a third grader, to a second-grade classroom.

The complaint describes this approach as part of Achievement First’s strict approach to discipline. It quotes the network’s website, which describes a policy of “sweating the small stuff.”

“In many urban schools, teachers and leaders ‘pick their battles,’ only addressing egregious instances of poor behavior,” the website goes on, according to the complaint. “Achievement First, on the other hand, has adopted sociologist James Q. Wilson’s ‘broken windows’ theory that even small details can have a significant effect on overall culture, and we believe that students will rise to the level of expectations placed on them.”

That approach does not work for her son, Ms. Morris said. “They treat all the kids the same,” she said. “There’s no differentiation if you have special needs.”

●●smf: Certainly the allegations that some charter schools and charter management organizations are sometimes remiss in providing services to special needs students is not unique to Brooklyn. The news that some charters and charter orgs – such as Achievement First and KIPP - discipline policies are strict is not new – and may even attract some parents to those programs.

The interesting point here is that The New City Department of Education (the school district) and the New York State Education Department are named as plaintiffs – holding them directly responsible and legally accountable for enforcing the charter school’s federal+state legal responsibilities and contractual charter provisions.