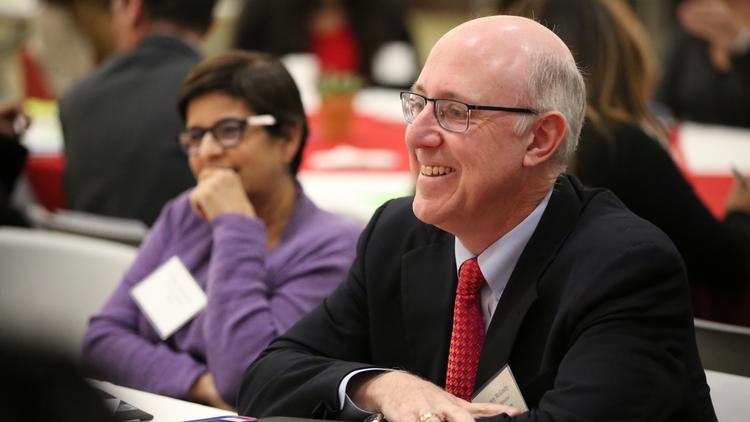 Nov 12, 2015 | 1:52 PM  ::  Charter schools have been wrongly accused of not serving all students and a proposal to greatly expand the number of them in Los Angeles would not result in financial catastrophe for the nation's second-largest school system, according to a top official with the group spearheading the plan.

The remarks were the first extensive comments by a representative of the Eli and Edythe Broad Foundation since The Times obtained a copy of the privately developed proposal and made it public in September.

Under that plan, 260 additional charters would open over the next eight years, resulting in about half of L.A. Unified School District students being enrolled in these independently managed public schools.

"Charters take all kids and that’s what they are required to do," Gregory McGinity, the foundation's managing director of policy, said in an interview after an invitation-only forum Thursday morning in an auditorium at the historic county general hospital.

McGinity also responded to an independent financial analysis presented this week at a Los Angeles Board of Education meeting. A panel of experts concluded that the growth of charters were a major factor threatening the district's fiscal solvency, but took no position on whether charter growth was good or bad for students served by L.A. Unified.

"I don’t see LAUSD going bankrupt," McGinity said. "LAUSD, like a lot of other districts, has fiscal challenges." He added that the panel made "a number of recommendations on how the district can find opportunities to improve its financial position. Other districts with a significant number of charters are thriving in terms of their operations and finances."

L.A. Unified has the most charters and charter students -- more than 100,000 -- of any district in the country. But some other districts have a higher percentage of students in charters.

McGinity said he was confident that the school board would take the necessary steps to remain solvent, adding he did not favor driving the district to bankruptcy, as some corporate-style education reformers have suggested.

McGinity also insisted that the 44-page plan was created "for discussion purposes" and continues to evolve as a result of meetings and ongoing input, including, possibly, from the school district.

The draft document laid out the necessity of an aggressive, charter-based approach and included a lengthy list of potential funders, including the Walton Family Foundation, which long has supported the growth of charters across the nation.

Charters are exempt from some rules that govern traditional public schools. Most are non-union.

The L.A. teachers union and other groups strongly oppose the idea, saying it would lead to a massive loss of funding and students enrolled in traditional schools that could cripple L.A. Unified. And they have consistently asserted that the charters would leave behind students that are more expensive and more difficult to educate.

That concern was articulated at the panel by school board President Steve Zimmer.

Zimmer added that the proposed charter expansion has complicated and distracted from the ongoing search for a new L.A. schools superintendent.

The school board is considering two resolutions that could slow the growth and independence of charters.

One would have the school board go on record opposing the Broad expansion plan.

The other would require charters to disclose much more information about their operations -- including salaries, actions taken by the board against the schools and the services available to disabled students.

Education Matters receives funding from a number of foundations. The California Community Foundation and United Way of Greater Los Angeles administer grants from the Baxter Family Foundation, the Broad Foundation, the California Endowment and the Wasserman Foundation to support this effort. Under terms of the grants, The Times retains complete control over editorial content.    ●●smf:  The appearance of a conflict of interest and a quid quo pro is exactly that. Apparent. Not the kid of parent engagement we’ve been looking for!