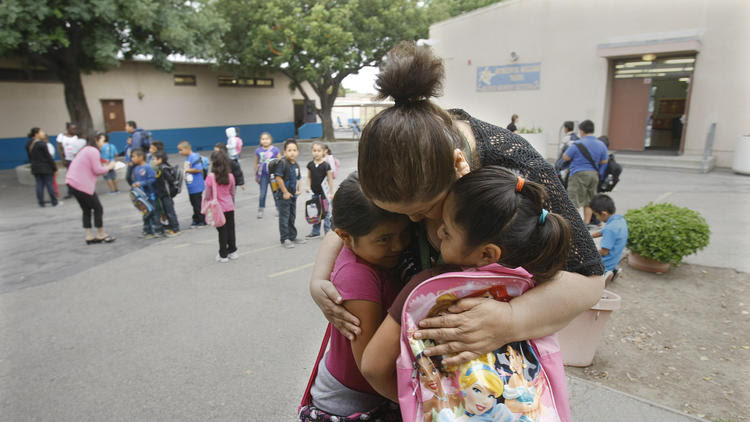 Principal Irma Cobian, shown hugging two students at Weigand Avenue Elementary, had to leave the school after a group of parents petitioned for her removal. The school's faculty eventually left the school in protest. (Gary Friedman / Los Angeles Times)

April 3, 2015  - 9 AM  ::  Under a state law allowing families such power, a parents group has launched a petition drive to force changes at a Los Angeles elementary school.

The effort, at 20th Street Elementary south of downtown, was organized with the help of the locally based nonprofit Parent Revolution, which also has worked with parents at other schools, with mixed success.

The parents announced their intent to use the state law in a letter Friday to L.A. schools Supt. Ramon C. Cortines.

"Our children are not well-prepared to go to middle school or the next grade level,” said parent Omar Calvillo in an interview.

Many of the school’s teachers are excellent, but some are not doing the job, said Calvillo, one of two parents to sign the letter. The less effective teachers either need to be replaced or to receive more training, he said.

And all teachers should commit to turning around campus academic results, said Calvillo, who has boys in first and fourth grades.

If parents collect signatures representing a majority of students, they can call an election to determine how the school will be run in the future. Their options include shutting down the existing school and replacing it with an independently operated charter school. Charters are exempt from the district’s union contracts and from some provisions of state law.

In this instance, parents say they want a district-managed pilot school, which would incorporate some of the freedoms of a charter school. Those campuses typically operate under a simpler union contract and teachers must opt in to the school’s new efforts. If they don’t prove a good fit, they can be forced to transfer to another campus.

“We think the local autonomy and staffing flexibility given to pilot schools will open the door to the sort of changes and increased accountability we need at 20th Street Elementary,”  the letter signed by parents said. “We are always willing to consider other credible plans the district might put forward to meet our objectives.”

Calvillo said that the parents are willing to work with the school’s current principal.

A plan put together by parents has many proposals. These include more involvement for them in key decisions; improved communication; training for parents in how to help their children academically; and instructional strategies that rely on assigning projects that draw from “real life experiences.”

California was the first state to give parents control over a campus through the trigger process. The idea has generated controversy nationwide, in part because trigger laws have been promoted by foundations that are frequently at odds with teacher unions. The unions and other critics have called these laws divisive.

Los Angeles Unified officials had no immediate comment. The district is on spring break this week.

L.A. Unified has been more receptive to parent petitions under the parent trigger law than some other school systems.

At 24th Street Elementary, a 2013 petition drive led to the campus being split between a charter and a reconfigured traditional school. At Haddon Elementary, that same year, parents halted their signature gathering when the district committed to working with them. At Weigand Avenue Elementary, organizing parents sought to remove the principal in 2013. The faculty rallied behind the principal and left as well.

‘Parent trigger’ may be pulled at 20th Street Elementary

Members of Parent Revolution, which supports the “parent trigger” law in California

Posted on April 3, 2015 11:25 am ::  Parents have launched a petition at 20th Street Elementary to take over the school, force major changes and win the right to replace its staff and teachers, the Los Angeles Times reported today.

If a majority of parents sign the petition, it will be the latest effort in the state to use the so-called “Parent Trigger” law, and it would be the first time it has been enacted at LA Unified this school year.

Former LA Unified Superintendent John Deasy had previously argued that the district was exempt from the Parent Trigger this school year by a federal waiver from the No Child Left Behind law. But Deasy resigned in October, and interim Superintendent Ramon Cortines lifted the ban in November.

Before Deasy’s ban, the Parent Trigger law had been implemented in LAUSD at only a handful of schools. The parents at 20th Street announced their intent to use the state law in a letter Friday Cortines.

“Our children are not well-prepared to go to middle school or the next grade level,” said parent Omar Calvillo, according to the LA Times.

The Parent Trigger law was passed in 2010, and the the action at 20th Street comes as movements are underway statewide to increase the law’s reach. However, other experts are saying the law has run its course, according to Ed Source.

John Rogers, an associate professor in UCLA’s Graduate School of Education and Information Studies and co-author of a research paper about the law, said it was a byproduct of the 2008 recession, but the state’s new Local Control Funding Formula law requires parental input, making the Parent Trigger unnecessary.

Rodgers (LASR spelled it right the first time)  said the law “taps into a real frustration at the core of many parents’ experiences, but it deflects from the real cause of that frustration,” according to Ed Source.